The family of an unarmed black man who was killed by police in Tulsa, Okla., renewed their calls for justice and systemic change Wednesday as they said Terence Crutcher posed no threat.

Crutcher, 40, was starting to turn his life around when a white police officer fatally shot him on Friday while responding to a report of a stalled vehicle, his family and police said.

One of the officers who circled the scene above in a helicopter can be heard in police footage calling Crutcher a “bad dude” who was “probably on something.” Moments later, Officer Betty Shelby, who was on the ground, fired the deadly shot as Crutcher had his hands up, video shows.

The slain man’s twin sister Tiffany Crutcher said early Wednesday on CNN’s New Day that she hopes something positive will come from the loss of her brother.

“We’re hoping that America will open their eyes, everybody, and see there’s an issue, a systemic issue, that needs to be solved. And we’re pleading with the leadership of this country, everyone, to just see that and let’s put some systems in place to prevent this from happening again,” she said.

Terence Crutcher had a criminal history and recently served four years in prison on a drug-trafficking conviction, according to the Associated Press.

But his sister told reporters that he had promised to be a better person in a text he sent her last month when they celebrated their 40th birthday. The change would start with classes at a local community college.

“I’m gonna show you, I’m gonna make you all proud,” she said the text read.

Shelby, a five-year veteran on the police force, was put on paid administrative leave, and the incident is under investigation.

Tulsa Police Department’s chief Chuck Jordan said Terence Crutcher was not cooperating with Shelby on the roadway when he was shot. Authorities said they found no gun on the suspect or in his vehicle.

“It’s clear to see that Terence was not being belligerent,” Damario Solomon-Simmons, one of the family’s lawyers, said at a news conference Tuesday, according to the New York Times. 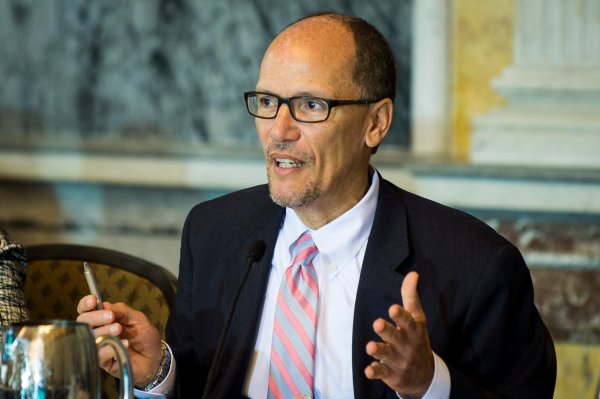