Egyptian President Abdel Fattah el-Sisi said he he has “no doubt” that Republican presidential nominee Donald Trump would make a strong leader.

In an interview that will air on Wednesday night, CNN’s Erin Burnett asked the former military general for his thoughts on Trump, whom he met in New York this week, and the Republican’s plan to ban Muslims from certain countries from entering the U.S. if elected.

“The United States in general conducts very strict security measures for everyone who wishes to visit it, which has been in place for quite a few years,” Sisi said. “It’s also important to know that during election campaigns many statements are made and many things are said, however afterwards governing the country would be something different. And will be subject to many factors.”

Sisi met with both Trump and Clinton, separately, in New York this week. Clinton is not expected to change U.S. policy toward Egypt if she becomes president, but some human rights advocates worry that Trump would forge closer ties with Sisi, whose brutal clampdown on Islamists and political opponents in Egypt has been widely criticized.

Asked if he thought Clinton would make a good president, Sisi voiced back-handed approval. “Political parties in the United States would not allow candidates to reach that level unless they are qualified to lead a country the size of the United States of America,” he said. 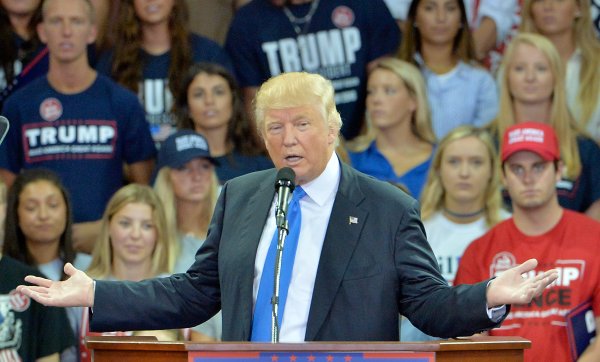 Republican Candidate for Governor of Oregon Reverses Support for Donald Trump
Next Up: Editor's Pick