A couple smile as they look on their second child who was born at midnight on Jan. 1 at a hospital on Jan. 3, 2016, in Shenyang, China's Liaoning province. China has abandoned its 35-year-old one-child policy and started to allow all couples to have two children from Jan. 1, 2016, the Chinese Communist Party announced after a key meeting
VCG/Getty Images
By Hannah Beech / Shanghai

China is looking for quality sperm. Ever since the nation loosened its one-child family-planning policy earlier this year, its sperm banks have reported serious shortages as couples look for ways to expand their families. Infertility stalks up to 15% of Chinese couples, according to Jiang Hui, the director of andrology at Peking University Third Hospital in the Chinese capital, Beijing, which officially unveiled a new sperm bank in August.

“We still don’t have enough donors,” he says, noting that there are only 23 legal sperm banks nationwide, with another 20 under construction — all at public hospitals. “Most families who come to us [for sperm] have to wait at least a year.”

The semen-collection room at Peking University Third Hospital is geared toward utility. There’s a portrait of a minimally clothed Western woman, a well-thumbed pornography magazine, a sofa, a sink, a box of tissues and some liquid soap. An emergency button is affixed to the wall. Each day, around 20 donors file in but only 19% of volunteers qualify for the program. Donors must be junior-college-educated men between the ages of 20 and 45 who are free of hepatitis B, a common liver infection in China. Vision problems, as well as genetic and sexually transmitted diseases, are also grounds for disqualification. Men must be at least 165 cm tall. The hospital won’t tell prospective families the donor’s IQ or education level — 90% have graduate degrees — but will give them physical descriptions, such as the man’s height, face shape and blood type.

Once they make the cut, the men must return multiple times and provide around 50 tubes of sperm over a half-year period. “It’s meaningful because I can help families without a kid,” says a 32-year-old IT programmer who had arrived at the hospital to make his second donation. (He declines to give his name.)

Unlike in the U.S., selling sperm or eggs is illegal in China. Sperm banks get around the regulation by offering men “subsidies.” In the case of Peking University Third Hospital, donors receive a 5,000 yuan (or $770) subsidy. Last year, sperm banks in Shanghai and Hubei province offered an iPhone 6 in lieu of an official payment.

China’s controversial family-planning policy, which for decades limited most urban families to a single child and many rural ones to two, has worked too well. Just at the point where China would naturally be profiting from a youth bulge to fuel its economy, the nation is facing a decline in its labor force. By 2030, China’s population will begin to shrink. The family-planning policy has also skewed China’s population with too many males and too many elderly. As a consequence, the national government finally did what demographers have advised for years: relax the draconian one-child rule.

Still, many Chinese families, particularly from the urban middle class, have little interest in raising more than one child. It’s a problem that has plagued other affluent societies in which not enough children are being born for populations to sustain themselves.

“My wife and I think raising more than one child is too tiring in a big city like Beijing,” says the IT programmer who was donating to the Peking University sperm bank and has a 1-year-old daughter of his own. “We don’t want to have another child in the near future.”

Some families, however, do want to take advantage of China’s family-planning reforms, which allow everyone to have a second child. Among these ranks are many older couples that are more likely to have trouble conceiving. Nationwide, China’s infertility rate has been increasing, in part because of rising pollution levels and increasingly sedentary lifestyles that affect reproductive health. Yet surrogacy is legally discouraged, while in vitro fertilization is nowhere near as common as in the West. Even with sperm banks, health authorities have been deluged by demand. For instance, each province is only allowed to have a single sperm bank, while those with a population of more than 100 million can have two. That’s hardly sufficient if even a fraction of Chinese couples decides to procreate past a single child.

As a result, illegal sperm banks and clinics offering surrogacy have proliferated. (Surrogacy is not banned outright, but medical staff and institutions are not allowed to provide such services.) Outside Peking University Third Hospital, advertisement cards are scattered on the street, offering a range of illicit reproductive services: surrogacy, sperm and eggs for sale, test-tube babies and sex testing. (Because of the traditional Chinese preference for boys, fetal sex testing is not allowed in hospitals, lest parents be temped to abort female fetuses.) 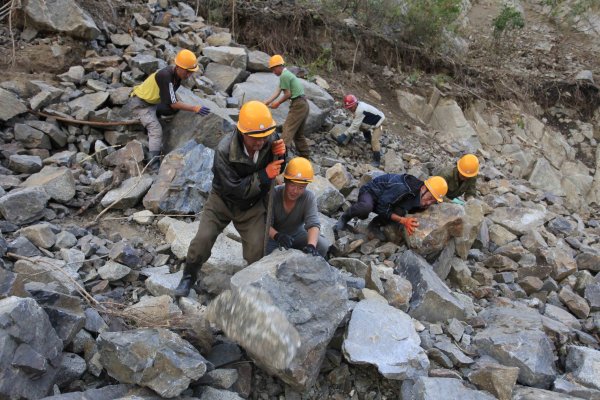 North Korea Is Desperate for Aid. But Its Nuclear Policy Means It Won't Be Getting Much of It
Next Up: Editor's Pick