Though it’s best known for smoothing wrinkles, Botox, which is derived from one of the most deadly toxins known to man, has repeatedly stunned the medical community for its seemingly endless applications. Though the drug is approved for nine medical conditions and several cosmetic ones, Allergan, the company that owns Botox, holds close to 800 more patents for potential uses of the drug. Since it was approved nearly 30 years ago, Botox has indeed become a staple of cosmetic enhancement, but today, more than half of its revenue comes from its therapeutic uses for conditions as varied as chronic migraines and back pain to excessive sweating and twitching eyelids.

Botox is generally considered safe if used in tiny amounts and administered by a licensed professional, but the drug is not without risks. In 2009, the U.S. Food and Drug Administration (FDA) required Botox carry a black box warning—the strongest type of warning label on any drug—cautioning the drug had been linked to serious side effects. For Botox, those can include the effects of the drug spreading from the injection site, which can cause muscle weakness, vision problems, trouble breathing and difficulty swallowing. There have also been a number of high-profile lawsuits brought against Allergan in which plaintiffs claimed that off-label uses of Botox for ailments like a child’s cerebral-palsy symptoms or an adult’s hand tremors caused lasting side effects.

Once a drug is approved in the U.S. for one medical condition, doctors are legally allowed to prescribe it for any medical issue they think it could benefit, regardless of whether it’s been proven to work for that condition. The practice is common in medicine, but some experts caution that more research is needed to understand how Botox works and whether it’s safe for all health problems before off-label use balloons.

The off-label use of this particular toxin has helped turn Botox into a blockbuster, as TIME reports in an in-depth cover story. Here are some of the most intriguing uses for Botox:

Chronic migraines (FDA approved)
In 1992, a Beverly Hills plastic surgeon named Dr. William Binder observed that when he gave people Botox for wrinkles, they reported fewer headaches. Allergan later tested the drug on people with chronic migraines, and Botox was approved for the disorder in 2010. Some doctors question whether the drug is truly effective for migraines, or whether placebo effect deserves the credit.

“Even if it’s placebo, the patients have fewer migraines,” says Dr. Denise Chou, an assistant professor of neurology at Columbia University Medical Center who regularly uses Botox to treat patients with chronic migraines (who has no financial ties to Allergan). “Right now the other medications we have are antidepressants, anti-seizure, or anti-blood pressure drugs—other medications that have also accidentally been found to help migraines.” Today people who receive Botox for migraine prevention get 31 injections in different spots on their head and neck, and the effects can last around three months.

Excessive underarm sweating (FDA approved)
When doctors noticed that their patients being treated for facial spasms were sweating less, scientists at Allergan and outside of the company began studying whether Botox could be a successful therapy for people with a condition called severe primary axillary hyperhidrosis. Botox was approved for the treatment in 2004. Some people also use Botox to treat overly sweaty hands and feet.

Overactive bladder (FDA approved)
“In my 30 years of medical practice, Botox was one of the most impactful treatments I had never seen” for overactive bladder, says Dr. Linda Brubaker, dean and chief diversity officer of the Loyola University Chicago Stritch School of Medicine. In one study, Brubaker found that about 70% of women she treated with Botox reported about three leaks a day, compared with the average of five leaks a day at the start of the study. But there’s a catch. Sometimes, Botox can shut down the bladder too much, and people may need to use a catheter, she says.

Crossed-eyes (FDA approved)
One of the first Botox approvals was for a disorder that affects about 4% of Americans: strabismus, where the eyes do not line up in the same direction.

Depression (not FDA approved)
Though many experts are still skeptical, early trials suggest Botox may alleviate symptoms in people with depression. The proposed mechanism is based on what’s called the facial feedback hypothesis, which holds that a person’s facial expressions can influence their mood. One small 2014 study of 74 people with major depressive disorder found that 52% of people who received Botox reported a drop in symptoms six weeks later, compared with 15% of the people given a placebo. Allergan is currently conducting clinical trials to see if Botox can treat depression.

Premature ejaculation (not FDA approved)
Injecting Botox into the penis might relax the muscle and delay ejaculation; Allergan is currently testing Botox for this issue. The company also holds a patent for the treatment of erectile dysfunction, which is currently being tested in a third-party clinical trial.

Abnormal heartbeat (not FDA approved)
Allergan is exploring Botox as a therapy to prevent abnormal heartbeat patterns after open-heart surgery (called postoperative atrial fibrillation). “After having a drug on the market for 27 years, and having a good understanding of the safety profile, we’ve made the decision to take it to an area of significant unmet need,” says Dr. Mitchell Brin, senior vice president of Drug Development at Allergan and Chief Scientific Officer for Botox about the potential use.

Severely cold hands (not FDA approved)
At the Cold Hand Clinic at the University of Chicago, doctors use Botox off-label to treat people with very cold hands. Botox is injected into a person’s hand in order to relax muscles that surround constricted blood vessels, the course of poor circulation. When the vessels relax and enlarge, blood flows through the hand and into the fingertips, providing symptom relief. Doctors say the treatment can last up to three months.

Cleft lip scars in babies (not FDA approved)
Every year, about 2,650 babies are born with a cleft palate and 4,440 are born with a cleft lip. Many undergo surgery. Some doctors—like Dr. Roberto Flores, director of the Cleft Lip and Palate Program at NYU—will inject the infants’ scars with Botox in order to hold the muscles still and allow it to heal. This can greatly improve the appearance of the scars. “[We are] giving Botox to infants, but there is science behind it,” says Flores. “It’s a relatively new and innovative offering.”

Painful sex (not FDA approved)
Some women experience muscle spasms on their pelvic floor or contractions of the vagina that can make sex painful. Botox injections can ease pain by making the muscles stop contracting. Doctors at the Cleveland Clinic who offer Botox injections for painful sex say some women may need injections every six months, while others may only need them every couple years.

Severe neck spasms (FDA approved)
Even before Botox was approved for frown lines between the eyebrows in 2002, Allergan got approval for the drug in 2000 for its use in treating a disorder called cervical dystonia, which is characterized by abnormal head position and severe neck pain.

Read more about the weird and wild science behind Botox, here. 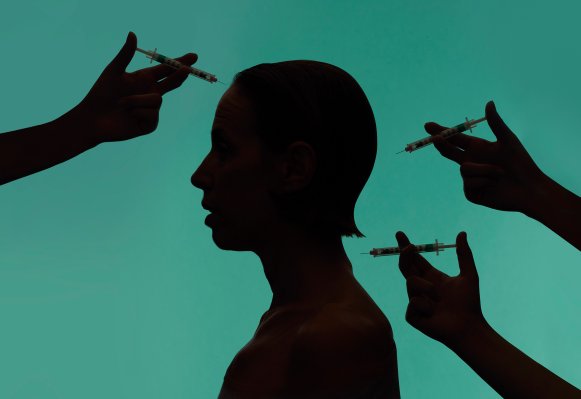 Botox: The Drug That’s Treating Everything
Next Up: Editor's Pick