The MacArthur Foundation announced the 2016 class of fellows on Thursday, bringing big acclaim and $625,000 to 23 pioneers in their respective fields.

As usual, the class spans artists and scientists, poets and historians, each “breaking new ground in areas of public concern,” the foundation writes. Here are the 2016 “MacArthur Geniuses,” as they are known:

Ahilan Arulanantham, a human rights lawyer whose work for the ACLU of Southern California focuses on ensuring due process for people facing deportation. As the foundation writes, “Courts have traditionally characterized deportation proceedings as civil cases, which means defendants do not have many of the rights guaranteed to criminal defendants, including the right to counsel and the right to ask for release on bond. As a result, immigrants going through deportation hearings often have to represent themselves in complex proceedings, during which they can be detained for months or even years.”

Daryl Baldwin, a linguist and cultural preservationist who studies the language of the Miami (Myaamia) nation, whose last native speaker died in the 20th century. “Through a multipronged approach that is rooted in restoring use of the Miami language, and includes both education and research,” the foundation writes, “Baldwin is imparting important cultural knowledge to present-day Myaamia descendants.”

Anne Basting, theater artist and educator who conducts workshops with older people with cognitive impairment. “Basting’s perspective on aging and the power of stories is changing the perceptions of caregivers, family members, and policy makers around the artistic and creative capabilities of older adults,” the foundation writes.

Vincent Fecteau, a sculptor known for his use of materials like papier-mâché and cardboard. When confronting his works, the foundation writes, viewers “find themselves at the threshold between visual perception and objective knowledge of three-dimensional space.”

Branden Jacobs-Jenkins, a playwright whose works like An Octoroon and Appropriate have uniquely tackled issues of race in America and earned critical acclaim. His workplace satire Gloria was a finalist for the Pulitzer Prize. “Although the provocation of his audience is purposeful,” the foundation writes, “Jacobs-Jenkins’s creation of unsettling, shocking, often confrontational moments is not gratuitous; these elements are of a piece with the world he has established on stage and in the service of the story he is telling.”

Kellie Jones, art historian and curator who focuses on contemporary art of the African Diaspora. “Her research and curatorial practice,” the foundation writes, “have been instrumental in introducing the work of now seminal black artists (such as Martin Puryear, David Hammons, and Lorna Simpson) to wide audiences and bringing to light long-forgotten or overlooked black artists.”

Subhash Khot, a theoretical computer scientist whose contributions to the Unique Games Conjecture (UGC) are helping test the limits of what kinds of problems computers can and cannot solve. “As computers come to drive ever more aspects of our lives, greater understanding of the limitations of computing is increasingly important,” the foundation writes. “Khot’s continued ingenuity and tenacity … will drive this important and fruitful area of research for many years to come.”

Josh Kun, cultural historian “exploring the ways in which the arts and popular culture are conduits for cross-cultural exchange,” the foundation writes. His books include Audiotopia: Music, Race and America, about African American, Jewish American, Mexican American, and Mexican pop music, and To Live and Dine in LA: Menus and the Making of the Modern City.

Maggie Nelson, writer who most recently saw acclaim for her 2015 book The Argonauts, about motherhood and queer family-making. “Her empathetic and open-ended way of thinking—her willingness to change her mind and even embrace qualities of two seemingly incompatible positions—offers a powerful example for how very different people can think and live together,” the foundation writes.

Dianne Newman, a microbiologist who studies the historical relationship between bacteria and the earth. “Newman is using the insights she has gained about ancient bacteria to understand how modern bacterial communities grow and survive in low-oxygen environments of contemporary biomedical significance,” the foundation writes.

Victoria Orphan, geobiologist who studies deep-sea microorganisms that consume methane. “Through her work on fundamental questions in microbial ecology,” the foundation writes, “Orphan is unraveling the biogeochemical processes underlying methane, sulfur, nitrogen, and carbon cycling and increasing our understanding of key determinants of Earth’s climate.”

Manu Prakash, physical biologist and inventor whose projects include creating a “water computer” in which air bubbles travel through channels, a study of the drinking methods of shorebirds and examining the behavior of a few drops of food coloring, which can resemble living matter. “Prakash defies traditional disciplinary boundaries in his coupling of basic research and fabrication of high-capability scientific instruments for widespread use in the field and classroom,” the foundation writes.

José A. Quiñonez, a financial services innovator who as founder and CEO of Mission Asset Fund helps immigrants, minorities and those from low-income households to access financial services and avoid predatory practices and exploitation. “Without bank accounts or a credit history, it is nearly impossible to obtain safe loans for automobiles, homes, and businesses or to rent an apartment,” the foundation writes. “Quiñonez is helping individuals overcome these challenges by linking rotating credit associations or lending circles.” Read his profile here.

Claudia Rankine, poet whose 2014 book Citizen: An American Lyric won multiple awards and played a major role in national conversations about race in America. Her work illuminates “the emotional and psychic tensions that mark the experiences of many living in twenty-first-century America,” the foundation writes.

Lauren Redniss, artist and writer who integrates “artwork, written text, and design elements in works of visual nonfiction,” the foundation writes. Her books include Century Girl, about a Ziegfeld Follies showgirl, and Thunder and Lightning, on natural phenomena.

Mary Reid Kelley, video artist who explores the historical and contemporary conditions associated with being a woman. “Drawing on literary and historical material,” the foundation writes, “the videos involve intensive research and critical reassessments of standard historical narratives.”

Rebecca Richards-Kortum, bioengineer working to develop technology solutions for providing medical care in low-resource areas us. “For example, she and collaborators have invented methods for diagnosis of oral, esophageal, and cervical cancers that overcome the challenges posed by invasive biopsies and multiple follow-up appointments in developing countries,” the foundation writes.

Joyce J. Scott, jewelry maker and sculptor who is “repositioning craft, and in particular beadwork, as a potent platform for commentary on social and political injustices,” the foundation writes. Her works have addressed the concept of the Mammy, lynching, and President Obama’s election day.

Sarah Stillman, a journalist for the New Yorker, who has written about foreign workers on American bases in Iraq and Afghanistan, abuse of civil asset forfeiture and juvenile sex offenders. “In bringing to light the plight of those at the margins,” the foundation writes, “Stillman is changing the terms of debate around even well-covered issues and demonstrating the continued power and relevance of long-form, immersive journalism.”

Bill Thies, computer scientist who is working to develop technology that benefits those in the developing world. “He overcomes challenges such as stark financial constraints, limited access to internet services, and low levels of literacy by devising interfaces between basic mobile phones, which are relatively affordable and widely used, and modern networks and applications,” the foundation writes.

Gene Luen Yang, graphic novelist known for best-selling YA books like American Born Chinese and Boxers and Saints. “Yang is leading the way in bringing diverse characters to children’s and young adult literature and confirming comics’ place as an important creative and imaginative force within literature and art,” the foundation writes.

Jin-Quan Yu, synthetic chemist who works on carbon-hydrogen (C–H) bonds. “In order to create many of the chemical compounds used in pharmaceuticals, agrochemicals, and materials science, inert C–H bonds in organic molecules must be broken,” the foundation writes. “Yu has made several significant advances in the efficiency, specificity, and practicality of palladium-catalyzed C–H functionalization.” 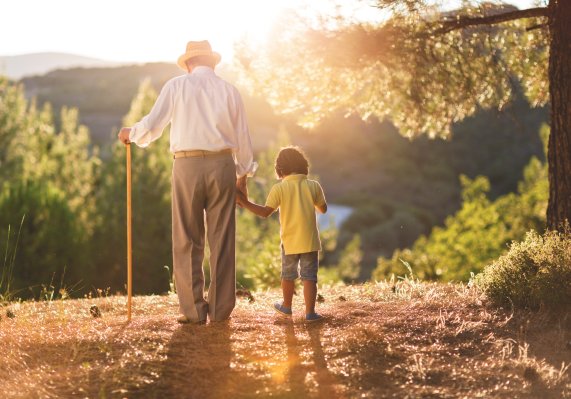 How Simple Acts of Kindness Can Change Lives
Next Up: Editor's Pick