The Secret iOS Feature That Could Change the Internet

A few weeks ago, a messaging app called FireChat launched. It looks, at first, like just about any other messaging app in an already very crowded market, but FireChat is sneakily subversive and quite possibly the most important thing to happen to the Internet since international network hubs began to form in 1995.

FireChat uses a criminally underexploited feature in iOS 7 called the Multipeer Connectivity Framework. This sounds fancy and complicated, but all it means is that one Apple (AAPL) device (an iPhone, an iPad, even an iPod touch) can connect to another without using the Internet. That last part is the most important and worth repeating: The device need not have a traditional network connection — 3G, wireless, whatever — but is instead creating its own network with another device. Two smart, connected machines, communicating via their own wireless signals, or Bluetooth, to talk to one another: This is what’s called a peer-to-peer connection. It’s also how Apple’s Airdrop feature works.

(You’re probably thinking: “I don’t see how this is subversive, or particularly important.”)

Right! Well, let’s first go back to 1995, or even earlier, when the Internet was young and wild and mostly on university campuses, where various nerds in front of computers connected with various other nerds in front of computers, and those nerds’ computers were connection points, but also nodes — an entry point for others to join the network, and in so doing create another node, too. Basically, one person’s computer could directly access the other person’s computer, and so on, along a chain of computers. This evenly distributed, wholly interconnected web of machines is called a mesh network. It’s the way the Internet was, mostly, for a long while: entirely decentralized constellations of connectivity among a vastness of, well, nothingness, ‘net-wise. As the Internet grew, an important philosophical and physical shift occurred. Rather than an evenly distributed mesh network, the Internet became dependent on centers — hubs for all those spokes. Look at a map of the physical Internet, and you’ll see.

(At which point you might ask: “So this is a different way to connect, but is it better?”)

Great question! No, of course not. Not yet. Multipeer connectivity has serious drawbacks, and FireChat only works when you are within about 30 feet of another person with a device that has FireChat. But — and this is a huge, crucial, important “but” — the way a mesh network works is that the larger the network, the greater the connections, the farther its reach. So if you are, say, in a stadium with a bunch of people using devices with FireChat, then presto: You have a rather robust network, over distances much greater than 30 feet.

Think of a daisy chain, or an old-timey firefighter bucket brigade. One device connecting to another, maybe 20 feet away, and that one connects to another, maybe 10 feet away, and so on and so forth, the distances pile up, but the network remains, and each link is a link that strengthens the chain (and connects to more than one device — hence the “mesh“). Two people that are 1,000 feet away from one another are able to connect using the links caused by 20 or 30 other devices. The network could be miles in diameter, even. Or the size of an entire town, theoretically.

(“I’m beginning to see why this is different, but I still don’t see how it’s better.”)

Yes, well, this also gets at how mesh networks are a bit subversive, too. It’s better because it is different, is what many argue. Look at the connectivity problems in the U.S. — the country invented the Internet, yet has miserably slow speeds compared to most of the rest of the developed world. Most of the issues have to do with the fact that the Internet is centralized, and our connection to it is controlled by a few gigantic companies. Couple that with the fact that our current, centralized network structure allows for rampant scraping of our data by large government agencies, and mesh networks begin to look like a safer, more secure alternative.

So you should still care about mesh networks! Think of them more as a boutique Internet, controlled like a co-op or neighborhood association. Of the mesh networks in existence — and there are many — the connection is often faster, and definitely cheaper, than its mainstream alternative. It also allows access to communities and individuals who wouldn’t connect otherwise — who live in an area too rural or poor or expensive for a big ISP to lay fiber. Don’t you think everyone should have access to the Internet? This is a very good way of going about it. And it’s less creepy, more grassroots and artisanal if you will, than Facebook’s drones.

(“Okay, okay. I’m going to download FireChat. What should I expect?”)

Well, don’t get your hopes up just yet. You’ll have to get others to download and join for it to have any really useful application. For now, there is some entertainment value in flicking over to the “Everyone” setting, which shows you — yes — everyone chatting on the app, via a traditional Internet connection. It’s chaos and like peering into the dark id of early Internet adopters. There’s a lot of trash-talking and flirting bordering on harassment and cursing and, mostly, people just trying to figure out how to use this thing. “Anyone here?” is a pretty typical entry. (And to answer: Not really, no, no one else is here yet.)

But the promise of FireChat and the mainstreaming of mesh networks is great. Sundar Pichai, the Google executive charged with running the company’s Android, Chrome, and Google Apps products, mentioned the use of mesh networks in wearables and home automation at the South by Southwest Interactive festival in Austin, Texas this year. There are obvious, and tremendous possibilities for mesh networking as the Internet of Things takes off. (Wouldn’t you rather have a friendly, localized Internet for your oven to connect to?) More immediately, this reporter plans to use FireChat this summer when he travels abroad with friends and needs to, say, find them in a crowded street market, but does not want to get hit with a roaming charge on his dataplan. Or again, when he’s backpacking and out of signal range. There are obvious uses during events, when networks clog and slow or simply collapse. Or during disasters.

As it stands, there are still plenty of spaces in between, patches of darkness among the now robust and beaming constellations of Internet across the globe. FireChat specifically, and mesh networks much more generally, will be useful in all these places. And, soon, many more places too. 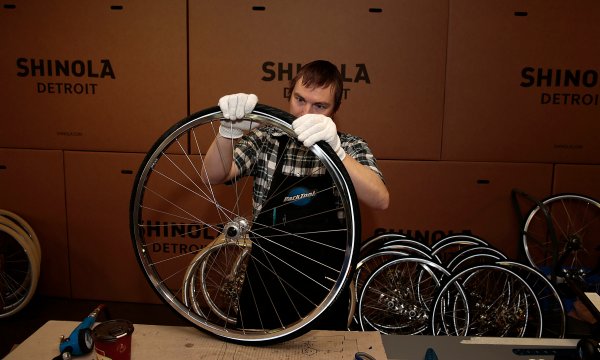 Meet the Company Helping Detroit Get Back on Its Feet
Next Up: Editor's Pick