The news that Brad Pitt and Angelina Jolie are to divorce is sad news for a family that has been through a great deal in the public eye. But it’s more than that: Given Pitt and Jolie’s professions—and their decisions to play out their romance at least in part in the public eye—it’s also worth taking note of as the passing of a media era. The couple, who came together in 2005, span a decade’s worth of living in public, and their mutual fame, which multiplied upon itself in a way that seemed infinite, was of a variety we probably won’t see again. They were the last A-listers who could generate scandal simply by living their lives.

The couple came together on the set of Mr. and Mrs. Smith, at a time when Pitt was still married to Jennifer Aniston. Long-running rumors that Pitt and Aniston’s divorce had been “because of” Jolie had an almost archetypal power. Were this a fictional story, the casting of good-natured sitcom star Aniston and the “dark,” intriguing Jolie (to that point still most famous for wearing Billy Bob Thornton’s blood in a vial around her neck and kissing her brother at the Oscars), would have seemed too on-the-nose.

But then, there was something fictional about it all, or at least something scripted—and brilliantly at that. In the short-term aftermath of the Pitt-Aniston divorce and the Pitt-Jolie coupling, all three participants played their roles to the hilt. Aniston granted her “first interview” (wounded… but healing) to Vanity Fair. Pitt and Jolie for their part followed up a coy, are-they-or-aren’t-they photoshoot depicting them as a married couple with children by plunging, immediately, into seemingly endless promotion of themselves as the heirs to Elizabeth Taylor and Richard Burton—globetrotting cosmopolitans whom scandal seemed to follow endlessly.

They both courted this controversy—living life as a heightened, surrealistic photoshoot—and, as time went by, avoided it. There was a palpable sense, over time, that Pitt and Jolie (who benefited in many senses from the overwhelming attention placed on them) may have gotten more than they bargained for. Jolie’s humanitarian work came to be substantially overshadowed by side chat that persists to this day over her behavior towards Aniston. As a consequence, she focused more and more on a career behind the camera and came to say little at all in public that was not laser-focused on her work with refugees or with health advocacy. The public would always be there, the next time she needed to promote a project.

Except when they weren’t. As celebrity culture became yet more omnipresent in the social-media age, Jolie and Pitt, the masters of the weekly print glossy, receded. In particular, her refusal in recent years to give the public even crumbs made her feel like a sentry from a different era. By the time, last year, that Jolie released a movie she’d directed about the dissolution of a marriage in which she and Pitt co-starred—something the public would have made a smash in, say, 2008—there was little to say. By the Sea followed Jolie’s previous directorial effort Unbroken as a disappointment, an underwatched film made by the world’s most-watched woman. A movie-length cryptic statement about your marriage? Ever heard of tweets? A couple that had once staged an elaborate photoshoot to make the public question whether or not they were together—and did so, again, to share with the world the news of their daughter’s birth—got married in secret. News of the wedding felt like an anticlimax.

Every aspect of the couple’s behavior, towards one another, towards their children, and in particular towards Aniston, had already been masticated endlessly since 2005, and often with Pitt and Jolie’s participation. Their coupling came at an inflection point for the media—the tail end of a time period during which A-list stars whose fame came from “legitimate” sources could get caught up in scandal. Pitt and Jolie’s coupling, in 2005, coincided with Tom Cruise and Katie Holmes’s as well as Ben Affleck and Jennifer Garner’s, and predated only slightly the troubles of Britney Spears. All of those figures helped fuel a revived celebrity-magazine industry as stars who merged “legitimacy” with a fondness for dramatics. The long tail of Aniston-Jolie “feud” covers on Us or Star felt like recognition that Pitt and Jolie were likely the last stars of their caliber who’d ever do anything worth covering in a celebrity magazine.

Today’s A-list movie performers—the few who are left—seem both more disciplined and less interested in fame for its sake than Jolie and Pitt. Do you care—really care—about Chris Pratt’s marriage or Jennifer Lawrence’s dating life? Pratt and Lawrence, less active in participating in the narrative-making-machine than were Jolie and Pitt, likely hope not. The celebrity-gossip press has long since moved on to Kim Kardashian and less noteworthy aspirants, anyhow. What movie stars are left are trained by the social internet to put forward a carefully sunny and bright persona, one that encourages the sort of faux-closeness Jolie and Pitt never had time for. Simply being a heightened version of themselves was their art. The wrap-up of that narrative comes after the delivery system for celebrity news faded in influence, in favor of a fast-moving and relentless internet that privileges those stars yet more willing to mine their lives for material. They’ll forever be big, but the pictures, undeniably, got smaller. 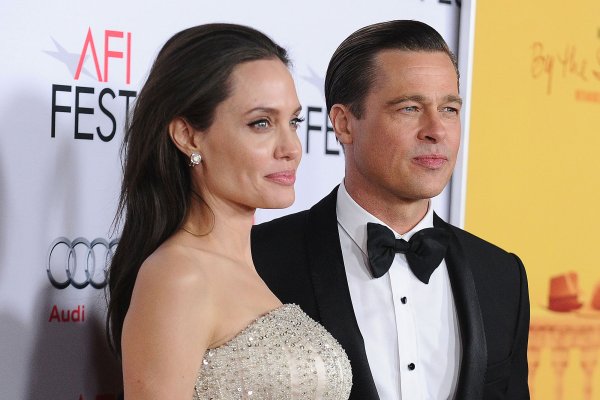 Angelina Jolie Files for Divorce From Brad Pitt
Next Up: Editor's Pick