Fallon’s response, to a paparazzo, that his show doesn’t go hard on anyone, made a certain amount of sense—and I was frankly surprised that people were surprised. Fallon using his Tonight Show access to achieve the goal of preserving that access in future is a dog-bites-man story; it happens every night.

But what the Trump interview, as well as his interview with Hillary Clinton Monday night, reveals most plainly is not an abdication of whatever may be Fallon’s duty to the American electorate but a confusing denial of the realities of good TV. As a person who has political candidates on his show, Fallon is within his rights to just fool around with them, if that’s what he wants—plenty of other late-night hosts fill the niche of informed comedy. It’s a massive missed opportunity and, in its denial that Trump is an unusual candidate, a political statement of its own, but one that’s within Fallon’s rights. But japery and jokes work best if they’re informed by a point-of-view. Fallon’s biggest problem isn’t that he isn’t tough enough—it’s that he has absolutely zero curiosity. Forget bad politics. It’s bad TV.

During his interview with Clinton, she noted that the current election was consequential and paused a beat, as though this were a major understatement. In a flat monotone, Fallon robotically spit out “Thank you, no, I know, I know, I know, yeah,” as though something were malfunctioning. The mere suggestion that elections have consequences—that Hillary Clinton was on the show in order to get people to vote for her, not just because sitting on a couch next to Fallon was a fun way to while away her time—was one Fallon couldn’t steer away from quickly enough. Fallon was similarly flat of affect when randomly declaring “Love her” after Clinton mentioned Maya Angelou in order to deliver her well-worn “believe him the first time” attack line on Trump. It wasn’t really about Angelou, as election watchers know, but Fallon was uncomfortable with the parts of the sentence that hinted even vaguely at discord between Trump and Clinton.

Trump is noticeably better at plugging himself into various entertainment formats than is Clinton, and generally refrained from talking about his opponent, or anything political, last week. He and Fallon chatted gamely about fast food and Monopoly, and Fallon showed Trump a picture of Trump’s childhood home for seemingly no reason. Trump said he was getting emotional, and Fallon agreed that he was too, social mirroring in the blandest and most knee-jerk sense.

It was here that the seams showed. Sure, humanizing a candidate is within the realm of what we’ve historically expected from a talk show, prior to a recent vogue for even network late-night hosts like Stephen Colbert and Seth Meyers going political. But if Trump is outré by historical standards, so too is Fallon, who simply cannot fake enthusiasm as well as he thinks he can. Not in recent memory has there been a host quite so determined to agree with every guest and every possible audience member. If you’re laughing, he’s laughing; if you’re crying, he’s crying. But Fallon would need to be a better actor to pull this dubiously worthy mission off. As it stands, both interviews showed him simply looking harried trying to race ahead of Trump and Clinton both in conversation, to foreclose the chance they said anything with which he could not safely agree.

The trouble is that if everything is great, or funny, or right, then nothing is. I don’t think Trump should have had his feet held to the fire on an entertainment show simply because of his policies. I think he and Clinton—and movie stars and musicians—should get real questions drawn from a host who’s actually listening to them because that’s what makes good TV. Enough telling everyone they’re right: The best humor comes from someone willing to take the risk, however slight, of seeming wrong. 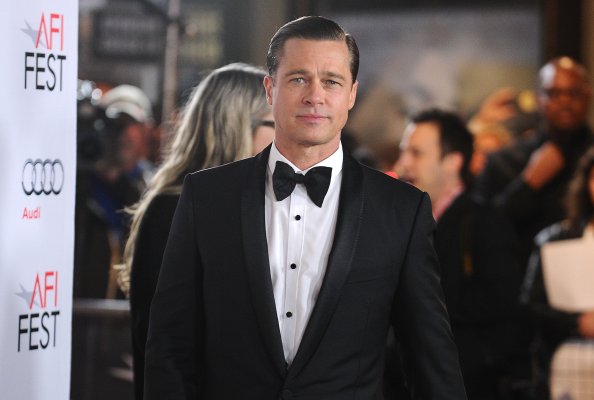 Brad Pitt Speaks Out About Divorce: "What Matters Most Now Is the Well-Being of Our Kids"
Next Up: Editor's Pick