Syrian government warplanes resumed heavy bombing of the rebel-held section of the city of Aleppo on Monday night, residents and medics in Aleppo said, hours after the Syrian military declared an end to a cease-fire negotiated by the U.S. and Russia.

At least one airstrike hit an aid convoy near Aleppo, reportedly destroying 18 vehicles delivering food and other items to rebel-held areas west of the city, and causing international outrage. The U.N. on Tuesday suspended all aid convoys in Syria in the wake of the strike.

Within hours of the declaration of the truce’s end, barrel bombs and missiles fell on the rebel sector of Aleppo, according to activists and medical personnel in the area. Residents blamed government forces and the Russian air force for the attacks. At least 12 people were killed, according to the Syrian American Medical Society. Dozens of others were reported injured.

The attacks marked the collapse of a partial cease-fire agreement that went into effect a week earlier following an agreement brokered by the U.S. and Russia. The deal produced a degree of calm in Syria but failed to provide humanitarian access to besieged cities and towns.

The U.N.’s humanitarian chief, Stephen O’Brien said the convoy struck in Aleppo carried aid for 78,000 people and was operated by the U.N. and the Syrian Arab Red Crescent. A Red Crescent warehouse and health clinic were also hit, he said in a statement.

A senior U.S. administration official, speaking on the condition of anonymity, told reporters during a briefing on Monday that the airstrike that hit the convoy had not been carried out by the U.S.-led military coalition. “We don’t know at this point whether it was the Russians or the regime,” said the official.

The U.N. special envoy for the Syrian conflict, Staffan de Mistura, condemned the attack. “Our outrage at this attack is enormous,” he said in a statement quoted by Reuters. “The convoy was the outcome of a long process of permission and preparations to assist isolated civilians,” he also said.

The U.N. Office for the Coordination of Humanitarian Affairs tweeted images of an interagency convoy of aid trucks, believed to be the vehicles targeted in the airstrike, on Monday morning.

Medical personnel said hospitals in the rebel-held part of Aleppo had been flooded with wounded people, including children. The shelling included the use of makeshift barrel bombs.

Once Syria’s most populous city, Aleppo has become a fulcrum of the Syrian civil war, divided between President Bashar Assad’s regime and rebel forces. The city has been devastated by years of conflict, but a significant population remains, with an estimated 300,000 people living under siege in the rebel-held side.

U.S. Secretary of State John Kerry announced the cease-fire early on Sept. 10 following long negotiations with Russia, which supports the Assad regime. The agreement reduced fighting in some parts of Syria for some days, but the truce teetered on the edge of collapse over the weekend as fighting flared up and the government resumed airstrikes on some rebel-held areas. Both sides accused each other of violating the truce.

In addition, U.S.-led international coalition warplanes mistakenly killed at least 62 Syrian soldiers in an attack in the city of Deir al-Zour, in an incident that further weakened the already fragile truce agreement.

The agreement also called for humanitarian aid to be allowed into areas under siege in Syria. As of Monday, aid convoys had not been allowed into the besieged section of Aleppo. 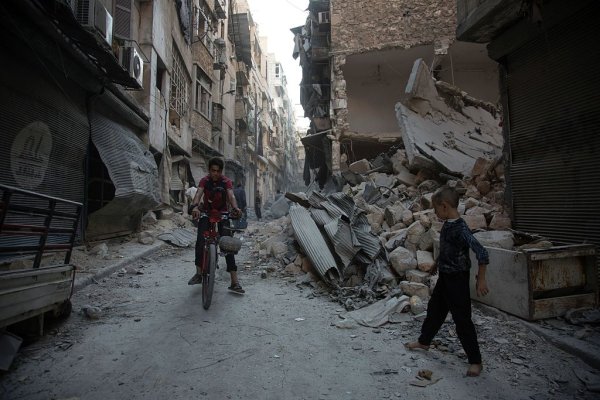