President Obama urged Americans not to succumb to fear amid the investigations into terror bombings in the New York, New Jersey and stabbings in Minnesota over the weekend.

“As Americans, we do not, and never will, give in to fear,” Obama said Monday.

Speaking from the Lotte New York Palace Hotel, where the president is meeting with government officials from across the globe on Monday who are in town for the U.N. General Assembly, the president said he was grateful that no one was killed in the Saturday evening bombing in New York City, but wished the two dozen people who were injured a speedy recovery.

As the president was speaking, officials in New York said a suspect in that attack, who has also been linked to subsequent bombs in New Jersey, had been taken into custody.

The attacks, Obama said, are a reminder that all must be vigilant in efforts to thwart terrorism, repeating the line “if you see something suspicious, say something,” while speaking in New York on Monday. He also asked the media to hold off reporting unconfirmed bits of information, saying “it does not help if false reports or incomplete information is out there.”

Obama also addressed the stabbings in Minnesota over the weekend, saying there is no connection between that event and the stabbings. Investigators are also looking into that case. The president said the federal government is providing officials in New York, Minnesota, and New Jersey all of the assistance they need throughout the investigations.

“I want to take this opp to reassure the people in this city, this region, and across American that our count terrorism and law enforcement professionals at every level are working together around the clock to prevent attacks and keep us safe,” Obama said.

The president called the terror organization ISIS a “failed cause” and said the U.S. will continue leading efforts to go after the group, its leaders, and its infrastructure in the ongoing coalition attacks in the Middle East.

“That kind of toughness and resoluteness and the recognition that neither individuals nor organ like ISIL can ultimately undermine our way of life that’s the kind of strength that makes me so proud to be an American,” Obama said. 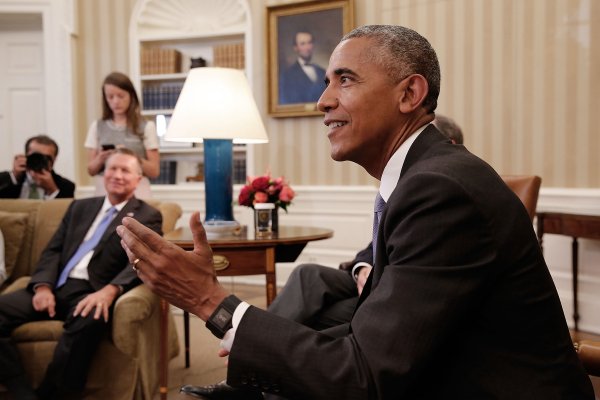 President Obama: 'I'm Pretty Confident About Where I Was Born'
Next Up: Editor's Pick