If you only read one thing: The issue of terrorism is once again taking center stage on the campaign trail following a trio of incidents this weekend in New York, New Jersey, and Minnesota. Within minutes of the explosion in Chelsea—even before local officials confirmed it was a bomb—Donald Trump told supporters in Colorado it was a bomb and encouraged the country to be “tough.” Hillary Clinton adopted a more measured approach, waiting several hours to be briefed by aides and allowing local officials to conduct a preliminary investigation. Her initial statement spoke of those injured and warned against a rush to judgement. Trump’s risky strategy paid off as law enforcement confirmed it was a bomb Sunday morning and they are now hunting for a person of interest—a naturalized U.S. citizen originally from Afghanistan—that is likely to play into Trump’s on-again, off-again call for a ban on Muslim immigration. The 2016 campaign is quickly becoming a race over the style of leader voters want to respond to such incidents.

Hillary Clinton isn’t struggling to hold together the coalition of black, millennial, and Hispanic voters that propelled President Obama to the White House—but she’s facing a do-or-die effort to get them to turn out to the polls. The overwhelming majority of those voters prefer Clinton over Trump, but they aren’t excited about voting for her. Low-propensity voters to begin with, Clinton needs them to show up in droves on Election Day in order to win. Her campaign is stepping up efforts to do just that into high gear, with Clinton holding a millennials-focused event in Philadelphia Monday. Her campaign also launched a new ad aimed at Hispanic voters. And she’s relying on her best surrogate—Obama—to make the case to his old coalition, particularly black voters, that they need to turn out.

Trump becomes the GOP’s Obama in online fundraising. Obama puts himself on the ballot. And why Donald Trump thinks he should be a newscaster.

Trump Glosses Over Past Actions, and Hopes Voters Do Same
The whitewashing campaign [Associated Press]

“If you saw her in the back of the plane — and she used the word ‘bombs’ also, by the way. I heard — I didn’t see it — but I heard I was criticized for calling it correctly. But what I said was exactly correct. I should be a newscaster because I called it before the news.” — Donald Trump to Fox News Monday morning, taking credit for calling the New York explosion a bombing before local officials had any evidence 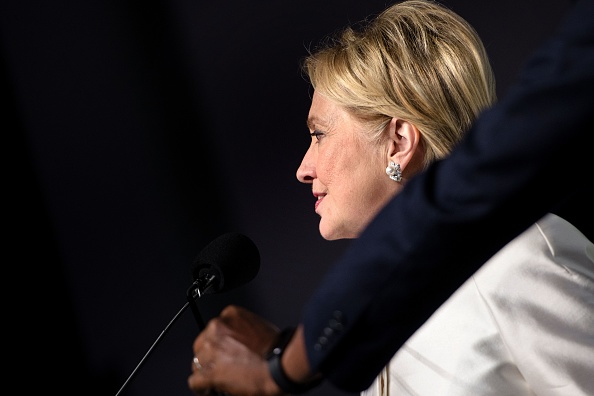 Hillary Clinton: Confront Terrorism With 'Resolve, Not Fear'
Next Up: Editor's Pick