A senior official from the Indian Army said the attack on Sunday in the border town of Uri, on the Indian side of Kashmir, fit the modus operandi of the Pakistani militant group Jaish-e-Mohammad, the Indian Express newspaper reported. He added that weapons recovered from the four gunmen killed in the attack — including grenade launchers and AK-47 rifles — bore Pakistan markings.

Singh, who was scheduled to visit Russia and the United States this week, said on Twitter that he had canceled the trips following the attack. “I am deeply disappointed with Pakistan’s continued and direct support to terrorism and terrorist groups,” he added.

Indian Prime Minister Narendra Modi had a similarly strong but more indirect response, condemning the incident as “despicable” and “cowardly” and saying those behind it would “not go unpunished.”

No group has claimed responsibility for the attack and Pakistan has denied any involvement.

“India immediately puts blame on Pakistan without doing any investigation,” Nafees Zakaria, a spokesman for the Pakistani Foreign Ministry, told Reuters. “We reject this.” In an earlier statement, the Pakistani army asked India for “actionable intelligence” on accusations it was behind the attacks.

Sunday’s attack, and the reaction from the Indian government, illustrates a particularly fraught period in the two countries’ already adversarial relationship — particularly over Kashmir. India and Pakistan have fought three of their four wars over the territory, which both of them claim in its entirety — although each side only controls a portion of. Border skirmishes between military forces stationed on either side are recurring incidents.

But this time could be different, depending on how the governments choose to react.

“After Pathankot, the Indian government responded with a degree of measure and reason,” Ashok Malik of the New Delhi–based Observer Research Foundation tells TIME, referring to a terrorist attack at an air-force base in the northern Indian state of Punjab in January. Malik adds that initial cooperation between the two countries to investigate that attack has broken down; India sees Pakistan as having dropped the ball.

“All of that certainly restricts the political space the Indian government has this time to also respond in a mature, reasoned and measured manner,” he says. “Something more than just hard statements and tough talking is probably expected.”

In addition, the internal unrest that has been a hallmark of Kashmir since the two countries became independent from Britain in 1947 has escalated recently, with the killing of a prominent separatist leader in July sparking widespread violent protests. The Indian government has placed the state under curfew and — somewhat controversially — used pellet guns to wound and dispel protesters.

The convening of the U.N. General Assembly this week adds another dimension to the attack’s aftermath. Pakistan has called on the global governing body to investigate human-rights violations by Indian forces, which operate under virtual impunity in Kashmir thanks to the Armed Forces Special Powers Act (AFSPA). It has also accused India of sponsoring its own militants in the restive Pakistani province of Balochistan, an issue Pakistan’s Prime Minister Nawaz Sharif is expected to bring up at the U.N. this week.

U.N. Secretary General Ban Ki-moon, meanwhile, condemned the Uri attack in a statement on Sunday and called on all parties involved to preserve peace and stability.

But experts say Pakistan’s efforts to internationalize the Kashmir issue could backfire because of the Uri incident. “It feeds into the Indian narrative of dissatisfaction in the Indian part of Kashmir being supported by Pakistani groups,” says Samina Yasmeen, an expert on South Asia and Islam at the University of Western Australia. The attack, Yasmeen says, “gives the Indian government the possibility of reacting … by suggesting that in fact whatever is happening in Kashmir is militancy sponsored by Pakistan.”

Beyond the diplomatic front, concerns abound that a military retaliation could follow the escalating rhetoric between the two nuclear-armed neighbors.

“It could be diplomatic, it could be military as well — something that would make it apparent that those who have threatened India have been punished in some manner,” Malik adds. “That’s the public mood, I can’t see how the [Indian] government can completely sidestep that.”

But Yasmeen cautions against an unbridled amplification of the bilateral conflict in the aftermath of this week’s attack, particularly as the two countries are looking to play an enhanced role on the international stage.

“There are two levels at which India is operating: one is as an emerging global power … and one is a very regional-focused approach,” she says, adding that the country’s inability to reconcile the two have led to its recent “belligerent” rhetoric that she says don’t “behoove” a global power.

“The danger would be that under present circumstances, engaging in [military] activity would be an easy route to hot conflict, not just a cold conflict,” she says. “I think that would be a very unwise move.” 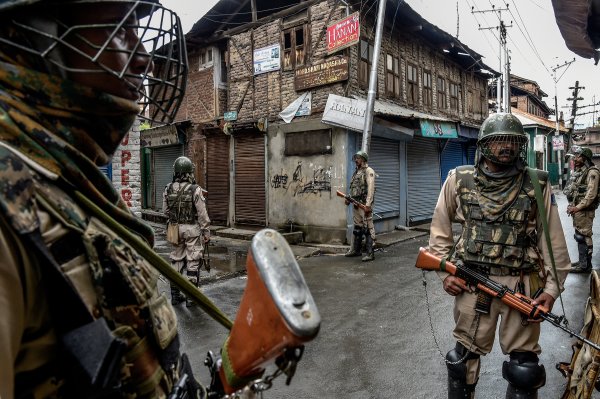 India Is Starting to Lift Kashmir Restrictions. What Happens Next?
Next Up: Editor's Pick