The president of the College Democrats at Ohio University first realized there was a problem several weeks back during a back-to-school campus activity fair. Sam Miller had set up a table on the leafy College Green to help recruit new members on the liberal campus in the foothills of Appalachia. But then she noticed that the Republican table next to her was getting more interest than hers. “They had a ton of people coming up to them,” she recalls.

It was an early warning sign. Even though Hillary Clinton has been leading in the polls, she has been trailing in her own goal to motivate and excite the young voters that formed the core of Barack Obama’s winning coalition in 2008 and 2012. Obama won 60% of these voters under the age of 30 during the re-election campaign, according to 2012 exit polls. Clinton’s support stands at 48% in these ages, according to a CBS News/New York Times poll released Sept. 15. Among the same voters, Republican nominee Donald Trump trails at 29% support, and 21% of respondents said they would support another candidate or stay at home.

Students on the campus of Ohio University, in a crucial swing state, have no problem explaining what is happening in the polls. No current candidate has won the hearts of college students, a fact that could prove most damaging to Clinton who was hoping to hold the Obama coalition together. “Obama was so inspiring. He had this aura around him. It’s a hard act to follow,” says 20-year-old Clinton supporter Anthony Eliopoulos of Lorain, Ohio. “She more quiet. She’s not as flashy.”

Of his fellow students, Eliopoulos explains the hesitation to get excited about the campaign. “They agree with her policies,” he says of his classmates. “They don’t trust her. All of the money that’s been spent over the years against her, it’s easy to see why.” Miller, the College Democrats’ leader, puts the problem more directly. “So many people are turned off by the candidates,” she explains of the challenge.

Clinton’s campaign operation is responding with an aggressive show of force. During the past week, a slew of supporters have been busy pitching millennial voters across the country on Clinton’s candidacy. In just the past two weeks, this push has included speeches by President Obama, First Lady Michelle Obama, former First Daughter Chelsea Clinton, vice-presidential nominee Tim Kaine and Massachusetts Senator Elizabeth Warren. “We’ve got to win them,” Kaine told NBC’s Meet the Press in an interview that aired Sunday.

In sheer numbers, millennial voters outnumber baby boomers in the U.S. And, if national and state-level polls are to be believed, these millennials are sliding out of Clinton’s hands. A Quinnipiac University poll in August had Clinton ahead by 24 percentage points over Trump. Last week, that advantage narrowed to just 5 percentage points. Less extreme versions of the shift are seen in other surveys that have Clinton aides fretting.

While acknowledging the enthusiasm gap, Kaine has laid out five areas where Clinton’s campaign saw opportunities to energize young voters: college costs, climate change, abortion rights, LGBT rights and immigration. “It’s on our shoulders to make the case. But on at least five litmus-test issues, the differences between Hillary Clinton and Donald Trump are vast,” he told host Chuck Todd.

Clinton’s old rival, Bernie Sanders, has also come out to campaign for Clinton, warning his supporters against the lure of either staying home or supporting a candidate from one of the nonmajor parties. “Before you cast a protest vote, because either Clinton or Trump will become President, think hard about it,” he told MSNBC’s Morning Joe before heading to Ohio to campaign for Clinton on campuses in Akron and Columbus. “Think about what the country looks like, and whether you are comfortable with four years as a Trump presidency.”

Clinton’s campaign appears to be moving on all fronts, with help from allies. They’ve hired an aide to handle millennial media, her allies at super PACs are spending $20 million to target female millennials in seven states, and an anti-climate-change super PAC is earmarking more than $6 million to get millennials to the polls in just Pennsylvania. Clinton has worked with aides to learn to take the perfect selfie, arm raised just above her head to deliver the most-flattering image for supporters’ social-media accounts, and has lined up young voters as validators across the country. On Sept. 15, she dialed into a millennial teleconference call to hear directly from young voters and her campaign has prepared state-by-state statistics about what her policies would mean for young people.

“We’re going to make really aggressive pushes to get students to the polls,” says Kunoor Ojha, a former Sanders aide who now heads national campus outreach for Clinton. “She’s a candidate who cares about people whether or not they voted for her in the primary,” she tells TIME. For Ojha, an Obama campaign alumna, she had no qualms about turning her support to Clinton after Sanders’ defeat. “It was a no-brainer at the end of the day. They agree on 98% of the issues,” Ojha said. It doesn’t hurt that Clinton has shifted to the left and taken up many of Sanders’ ideas, especially on college debt.

Clinton plans to renew the charge herself on Monday, with a speech at Philadelphia’s Temple University. Her speech, aides said, would focus on a campaign proposal to make community college free for all Americans and a public-university education debt-free for them. It follows Obama’s visit to Philadelphia on Sept. 13, Warren’s visit to the University of Pennsylvania on Sept. 9 and more than 1,000 grassroots events across the state this weekend.

The X factor in this election will not just be the margin by which Clinton wins young voters, but the number of voters she can get to the polls. In 2008, when fresh-faced Barack Obama was running against 71-year-old John McCain, Obama prompted a record 51% of voters under 30 to show up. That fell off to 45% turnout in 2012. Clinton strategists say the campaign can win with a slightly smaller percentage of young voters showing up because there are more of them now, but any significant drop-off is compounded by the fact Clinton is unlikely to draw as loyal a turnout among African Americans as Obama, the nation’s first black President.

Research from data-mapping powerhouse Esri finds millennials, defined by them as ages 18 to 37, make up 33% of the voting-age population in Ohio and Pennsylvania, 36% in Nevada, and 37% in Colorado — all toss-up states where Clinton and her allies are making hard pushes. “Do they realize they are the biggest voting bloc?” Esri executive Jeff Peters asked rhetorically.

The political arm of EMILY’s List, a group that backs female candidates who support abortion rights, is partnered with Clinton’s biggest super PAC, Priorities USA, to reach young female voters in Nevada, Ohio, Pennsylvania, Iowa, North Carolina, Florida and New Hampshire. “A lot of young women don’t know Hillary Clinton and that her values are in line with what they care about,” said Rachel Thomas of EMILY’s List. “And a lot of women never see how politics affects their lives.”

But it’s a tough lift. In interviews with 16 students here and another dozen in Columbus, Ohio, many said they liked the idea of a female President but didn’t entirely understand the hype around it. They care more about the environment and LGBT rights than their parents, want a solution to the nation’s broken immigration system and abhor discrimination of all stripes. But they don’t necessarily know Clinton’s record jibing with their views. After all, most are too young to remember the 1990s, when Clinton was a trailblazing First Lady. For them, she’s always been around, but they aren’t sure why. Many have internalized many of Sanders’ criticism of her as an elitist from the bruising primary.

The fact that these ideas are being circulated in Athens, Ohio, a bastion of liberalism in a conservative part of the state, is even more alarming for Clinton. The local Mexican restaurant operates as a worker-owned co-operative and specializes in vegan entrees. The university president faced conservative backlash for criticizing pro-Trump “Build the Wall” rhetoric on the community’s Graffiti Wall, a forum dating back to the 1930s for unsanctioned speech. Clinton visited Athens in May on her first swing-state bus trip, trying to repair damage after voters here broke for Sanders by a 2-to-1 margin in March. Esri data says 55% of the county’s eligible voters are millennials, heavier than the national average of 35%.

For Miller, the early struggle at that back-to-school afternoon only deepened her commitment to Clinton. “It’s getting better,” she says. On a recent Monday night, Miller was busy welcoming new faces to a Democratic Party office just off-campus. There, she was talking up opportunities to sign up new voters, call their neighbors and evangelize for Clinton.

Students filed into the storefront office and mingled among themselves as they listened to the soundtrack from Broadway’s Hamilton. While their classmates were participating in the first night of fraternity rush across the street, these students were waiting to get the how-to-volunteer lesson. When it seemed no more newcomers were coming, the campaign aide tasked with organizing students here asked the unthinkable. “Can you turn off Hamilton?” he asked sheepishly. “That’s the only time you’ll hear me say that,” he said to laughs. Music could wait. He had 20 students to pitch on joining the Clinton campaign as a supervolunteer, known as a “fellow.”

As they wrapped up their motivational speech and snacked on Dominos pizza, Hamilton came back. Jazzmine Hardges wrote down her contact information on the way out the door so the campaign could follow up with her about volunteering and, if not that, at least remembering to vote. More an activist than a politico, she nevertheless was impressed with Clinton and surprised others in her cohort were not. “She has all of this experience,” said the 20-year-old studying communications and philosophy. The Kent, Ohio, native then added what Clinton’s team hopes will resonate if nothing else does: “Any Democrat would be better than Trump, or Republicans in broad terms, for this country.” 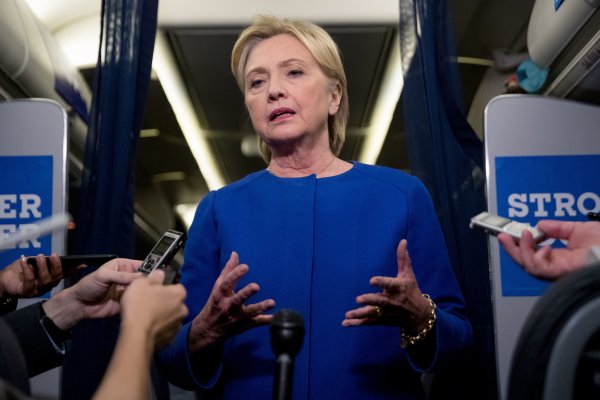 Hillary Clinton Highlights Plans to Defeat Terrorism After Attacks
Next Up: Editor's Pick