Edward Albee, who died Friday at the age of 88, was, arguably America’s greatest living playwright.

Early in his career, TIME described him as “the most talked-about young American playwright.” As his career flourished—through successes and slumps, multiple Pulitzer Prizes and Tony Awards—TIME continued to review his work.

Here are some of the most notable reviews:

In February 1961, TIME described Albee’s off-Broadway The American Dream as “an impressive one-acter.”

The same review issued a bold, if pessimistic, prediction about what would later become Albee’s most famous work.

“Albee has since turned out four more one-act works, is currently working up from one-acters toward full-length drama by writing a two-act play that seems unlikely ever to appear on a midtown marquee,” TIME wrote. “Its title: Who’s Afraid of Virginia Woolf?”

Despite prior predictions to the contrary, Who’s Afraid of Virginia Woolf? did, in fact, appear on a midtown marquee, making its Broadway debut in 1962 and winning a Tony Award for best play. In 1666—when it was turned into a movie starring Elizabeth Taylor and Richard Burton—a New York Times critic hailed Who’s Afraid of Virginia Woolf? as “the best American play of the last decade.”

TIME’s October 1962 review of the show, Albee’s first full-length play, described it as “a blood sport as well as a play.”

“The weapons are words—vicious, cruel, unspeakably humiliating, unpredictably hilarious—the language of personal annihilation. Jabbing, slashing, eviscerating each other are a middle-aged history professor and his wife,” TIME wrote.

While noting that the play had “jolted the Broadway season to life,” the review also highlighted some of its shortcomings: “needlessly long (3¼ hours), repetitious, slavishly, sometimes superficially Freudian, and given to trite thoughts about scientific doom.”

“But a powerful play never founders on its flaws,” TIME wrote. “Albee‘s language is whiplash strong and leaves welts. His characters are rivetingly modern, and their weird autobiographical outbursts carry a numbing conviction.”

That trend continued when A Delicate Balance opened three years later: “The lateness of the night, the thirst of the soul, the solitary anguish of the self—these have always been the prevailing mood winds of Albee‘s plays,” TIME wrote in 1966. “But he cannot construct a credible plot in which to trap them, and he fails again in Balance.”

TIME’s largely critical review took issue with the characters and plot construction of A Delicate Balance, the play for which Albee won his first Pulitzer Prize.

“Edward Albee can be trusted as a bartender, an unleasher of tirades of aggression, a put-down comedian, and a lover of English whose sentences curl with the involuted beauty of a sea shell, but when he puts on his thinking cap, he is a poseur,” TIME wrote. “To embrace everyone is to be no one. A Delicate Balance is a wish for oblivion posing as a plea for love, and its fine cast and funny lines cannot hide its phony bones.”

Albee endured what many characterized as a slump for a couple decades. Prolific as he was, his plays and adaptations weren’t as well-received as Who’s Afraid of Virginia Woolf? had been.

But Albee’s Three Tall Women was met with acclaim in 1994, and it later won the Pultizer Prize. A TIME review published in February 1994—with the headline “Albee is Back”—hailed it as “stunning.” 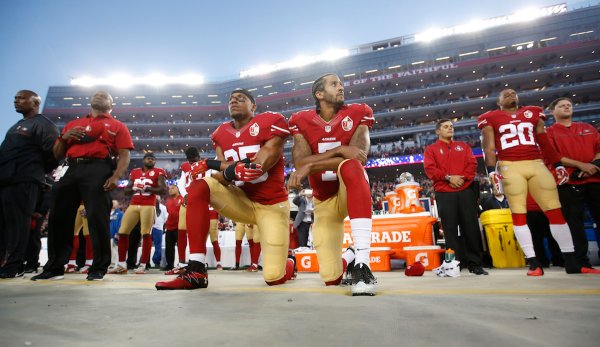 Colin Kaepernick, the Integrated NFL and When Protest Works
Next Up: Editor's Pick