Review: If You Love David Lynch You Have to Play 'Virginia'

Celebrated auteur and obscurantist David Lynch isn’t given to explaining himself with words. Watching him struggle in interviews to answer probing questions about his work can be uncomfortable. That’s been a problem for casual viewers of some of his films, because especially elliptical ones like Mulholland Drive and Lost Highway function like transient labyrinths. There are no enduring viewings of Fred or Betty’s journeys, only flickers of resonance in the dark.

Variable State’s Virginia, whose makers cite Lynch as an influence, offers a similarly opaque experience, but its rewards—best realized off multiple viewings—are rich and many. The game, out September 22 for PC, Mac, Playstation 4 and Xbox One, invites you to “take a trip,” then launches you down a rabbit hole of baffling vignettes. But what if Lynch gave us control of the camera and the freedom to study his sets? What if like some auditor of oblique facades, you could scrutinize an automobile’s sun visors and glove compartments, a sun-dappled glade’s strange vegetation and oracular grottos?

At the game’s simplest level, you play as Anne Tarver, a fledgling F.B.I. agent investigating the disappearance of a boy from Kingdom, a rural Twin Peaks-ish Virginia town. She’s also been instructed to scrutinize her partner on the case for reasons implied but never fully given. The case particulars unfurl, the mysteries pile up and by the end, you’re questioning the nature of reality, who you are and where you’ve been.

That’s already a clearer summary of the framework than you’re given by the game itself, which slow drips even its simplest divulgences over the course of a few dozen “chapters.” You weave through episodic scenes, a ghostly person-camera trawling a dot over scenery in ways that to a passive observer might evoke the oscillating arcs of a wandering insect until it lights on a hotspot, at which point it becomes a tiny circle. Move closer to the indicated zone and the circle becomes a diamond, indicating you can interact, either to snatch up a collectible or advance the scene. That’s the entire interface, as elegant, intuitive and unobtrusive as any I’ve seen.

From there, Virginia becomes a game of unraveling and restitching, challenging you to make sense of its abrupt scene transitions, constrained perspectives (select areas have invisible walls) and narrative reticence. Much of the experience involves you simply moving through rooms, halls or small glades, observing your environment and puzzling out backstories. Characters and scenes shuffle in and out without authorial elucidation. Non sequiturs, animal symbols and nostalgic references abound. There’s even a sequence set in a dim bar with a dream-pop band on a red-curtained stage that pastiches Angelo Badalamenti and Julee Cruise’s “Falling.”

In film, leaping between incongruous scenes is sometimes called a smash cut, where it’s employed to unsettle or destabilize the viewer. In Virginia, intriguingly, what’s elided when this happens is often just the tedious filler other games that model continuous spaces have by default, because of player agency smashing into the spatial realities of having to ambulate from point or moment A to point or moment B.

Why descend all of a towering stairwell when the game can jump you forward to the basement? Why, if you’re in a car wheeling to some remote location, show the entire drive? These temporal abridgments in a Lynchian film might feel too straightforward, too moment to moment with their obvious scenic connective tissue. But in a game that’s modeling three-dimensional space, where we tolerate the drudgery of holistic ambulation, they complement the sense of having come unstuck in space-time.

You’ve also come unstuck from conventional conversation. Virginia‘s characters don’t speak, given to communicating by dint of gestures and facial expressions. You’ll hear not a word over the course of playing, and even the subtitles only exist to clarify news clippings, or identify music motifs when they change. It’s a directorial choice that I worried at the outset might feel gimmicky. But by the end I’d come to prefer that distance between the implicit and explicit. It let me focus on the game’s many nonverbal cues and physical clues, and it complements the game’s dreamlike sense of dislocation and slippage.

If Virginia errs at all, it’s in giving then abruptly stripping you of agency in certain moments. Occasionally the game will leap from one scene to another without your prompt, but after deluding you into thinking you’re in the driver’s seat by handing you the camera controls. You’ll start to swivel, sliding across a vantage, notice something interesting, then wham, you’re on to the next scene, and the only way back is to revisit the chapter.

This, to a mind like mine—given to scrutinizing scenes for clues or symbols carefully embroidered into a moment—eventually prompted frantic, preemptive panning. My paranoid skittering in turn distorted otherwise beautiful scenes. These directorial caprices, tantamount to vaudeville hooks, were thankfully rare. But they had me wondering whether unprompted jump cuts are incompatible with player agency, because it feels like the wrong sort of rug-pulling. (Remove agency from these scenes, by the way, and problem solved.)

As I watched the credits roll off my second play-through and the ramifications of absorbing a story in this peculiar way settled in, I shifted from technical admiration to awe. There’s a mutually subtractive and additive thing happening here with Variable State’s deft amalgam of cinematic and interactive modes. The game’s idea of interactivity is on the one hand museum-like and honed to singular points of inexorability—you will click this and this only to proceed.

But instead of fixing your view by locking the frame, you’re able to pore over the elaborate, ambient sets like an archaeologist scrutinizing snips of celluloid, piecing together the disjointed moments of a life. Other “walking simulators” settle for the museum tour, replete with audio logs and text dumps that point to and fix meaning. Virginia trades that sort of clarity for another: that of the subjective, ever-precarious moment.

And what gorgeous, reverberant moments there are in this game, empowered by its absent words and explanations. As David Lynch put it, answering a question about Lost Highway, “There’s things that have to happen, information that has to be given, for the thing to go. To say with words any more, would not be good.” 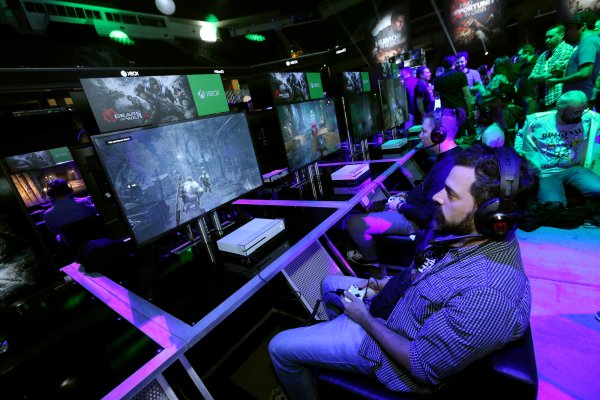 Gears of War 4 Trailer Teases Maniac Storms and Other Razzle-Dazzle
Next Up: Editor's Pick