Nadia Murad Basee Taha, who survived captivity by ISIS in Iraq to become an activist for her Yazidi people, has been appointed as a Goodwill Ambassador for the United Nations.

The United Nations Office on Drugs and Crime (UNODC) said that Murad’s appointment on Friday as an Ambassador for the Dignity of Survivors of Human Trafficking marks the first time that a survivor of atrocities has been awarded this distinction.

Murad, a 23-year-old member of the ethnic Kurdish minority Yazidi group, briefed the Security Council last year in the first-ever session on human trafficking. She described being rounded up at the age of 19 along with fellow Yazidi in 2014, and watching ISIS fighters shoot men and boys in cold blood. She was subjected to sexual abuse at the hands of ISIS fighters and was bought and sold various times.

ISIS has targeted the Yazidi population of approximately 230,000 people in the area, considered “kafir” or “nonbelievers” because they are not Muslims, in what is widely considered to be a genocide. In August 2014, ISIS militants captured the city of Sinjar, resulting in as many as 50,000 Yazidi people becoming stranded on the Sinjar Mountains and culminating in over 5,000 deaths of Yazidi men.

An advocate for victims of ISIS in Iraq, Murad was named one of TIME’s 100 Most Influential People of 2016. She has met with various heads of state and global leaders to raise the plight of Yazidi victims of trafficking. The UNODC stated that during her Ambassadorship, Nadia will “focus on advocacy initiatives and raise awareness around the plight of the countless victims of trafficking in persons, especially refugees, women and girls.”

The induction ceremony is taking place on Friday at the New York United Nations Headquarters, to mark the International Day of Peace, and will be held in the presence of Secretary-General Ban Ki-moon, H.E. Ambassador Samantha Power, Permanent Representative of the United States to the UN, and Amal Clooney, international human rights barrister and Murad’s attorney. 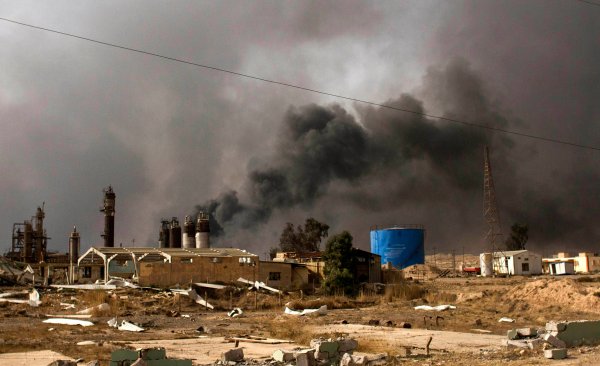 Iraq Readies for Big Push to Rid Mosul of ISIS
Next Up: Editor's Pick