Donald Trump on Friday addressed the so-called “birther” theory in about 40 words after spending a half hour on an unrelated military tribute and promotion of his new upscale hotel.

The remarks came at the tail-end of a media event that his campaign had ginned up interest in through interviews and press statements previewing a turnaround.

The event, carried live on cable television networks, unexpectedly turned out to mostly feature the nominee discussing his new Trump International Hotel before ceding the stage to a group of veterans who have endorsed him, then returning for the brief statement.

Trump had long been one of the most vocal proponents of the birther movement in the run-up to the 2012 presidential election and even after Obama released his long-form certificate of live birth in April of 2011, including statements to reporters that he didn’t know the president’s birthplace as late as July of 2015.

In his brief remarks on Friday, Trump also falsely accused Hillary Clinton and her 2008 presidential campaign of originally raising doubts about Obama’s birthplace, and he falsely asserted that he was the one to put an end to the controversy.

“Hillary Clinton and her campaign of 2008 started the birther controversy. I finished it,” he said.

As PolitiFact has noted, there is no evidence that Clinton or anyone in her campaign ever supported the birther argument. Clinton has also denied the claim and has repeatedly criticized Trump on the issue.

In a statement on Thursday, Trump’s senior communications adviser Jason Miller praised him for doing “a great service to the President and the country” by getting Obama to release his long-form birth certificate. But Trump continued to raise questions about Obama’s birthplace long after the birth certificate was released.

Obama, meanwhile, asked that the presidential campaign move on to more serious issues.

“I was pretty confident about where I was born,” Obama told reporters at the White House on Friday morning, when asked about Trump’s upcoming remarks. “I think most people were as well, and my hope would be that the presidential election reflects more serious issues than that.” 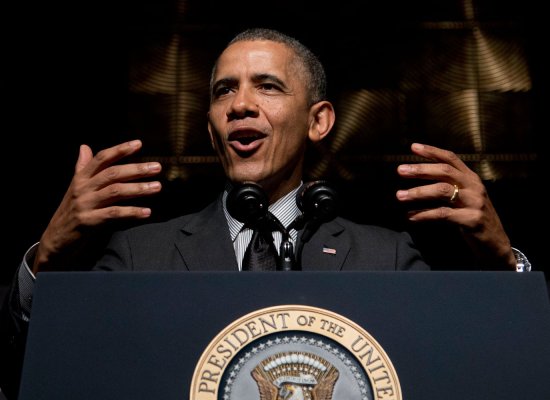 Obama Jokes About Birther Controversy
Next Up: Editor's Pick