Indonesia is planning to ban gay-networking apps, in the latest demonstration of the country’s growing intolerance toward the LGBT community.

A government official confirmed that authorities are already moving to block at least three apps — Grindr, Blued and BoyAhoy — after a request from police, Agence France-Presse (AFP) reports.

But the ban could be much broader. According to BuzzFeed, more than 80 websites and applications geared toward sexual and gender minorities could fall under the injunction.

“We are starting to block LGBT applications,” AFP cited Communications Ministry spokesperson Noor Iza as saying, adding that the move was intended to target services that promote “sexual deviancy.”

The spokesperson said that letters had been sent to three online service providers requesting that the apps be blocked, but it is unclear whether they will adhere to the bid.

Google and Apple are reportedly among the private companies that will be asked to remove the apps from their digital stores. Neither company immediately responded to TIME’s request for comment.

Those who support the ban claim that apps geared toward the LGBT community are prone to hosting pornography and other content viewed as inappropriate for Indonesia’s conservative society.

The recent bust of a pedophile ring allegedly linked to Grindr and several other networking apps was reportedly the chief impetus for the ban, but rights advocates believe that officials used the operation as a convenient excuse to advance a discriminatory agenda.

The decision to ban the apps, which BuzzFeed reports was made during a closed-door meeting of government officials on Wednesday, is the latest move in what is viewed as an unprecedented crackdown on the LGBT community in the Muslim-majority Southeast Asian nation.

Homosexuality is not illegal in Indonesia, but calls for criminalization and “cures” have gained public support throughout what Human Rights Watch said has been a year of regression on LGBT rights in the country.

“This ban on what Indonesian authorities called ‘LGBT applications’ is discriminatory online censorship, pure and simple, and yet another blow against the rights of LGBT persons in the country,” Phil Robertson, deputy director of HRW’s Asia division, tells TIME in an email. 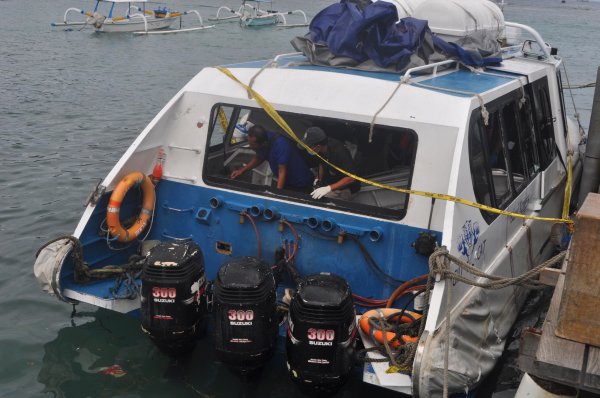 2 Dead, 13 Injured in Bali Tourist-Boat Explosion
Next Up: Editor's Pick