Japan Will Start Joint Patrols With the U.S. in the South China Sea

Sailors of Japanese helicopter carrier Ise patrol past their ship shortly after arriving at the former U.S. naval base, Subic port, north of Manila, on April 26, 2016
Ted Aljibe—AFP / Getty Images
By Tekendra Parmar

Japan will begin joint training patrols alongside the U.S. in the South China Sea, its Defense Minister Tomomi Inada said on Thursday.

In a speech at a Washington, D.C., think-tank, the Center for Strategic and International Studies, Inada said Japan’s increased engagement where the two countries share common concern over China’s territorial pursuits, will also include “capacity building” for coastal nations.

According to Reuters, Japan has agreed to provide the Philippines — which also has territorial disputes with China in the contested waters — with two large patrol ships and up to five used surveillance aircraft.

“[If] rule bending” was to succeed, said Inada, in reference to China’s response to recent arbitration over the disputed waters, “the consequences could become global.” 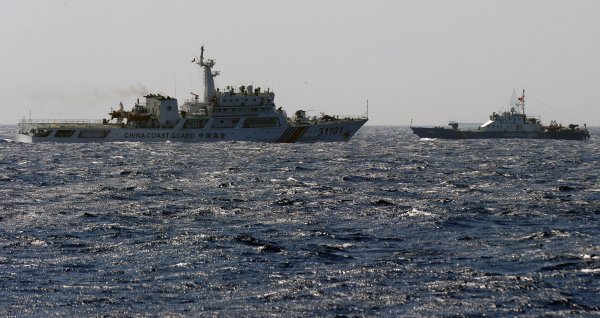