Hillary Clinton Returns to the Campaign Trail to Talk About Kids

Hillary Clinton returned to the campaign trail on Thursday after recovering in her Westchester home from a bout of pneumonia, four days after becoming weak and dehydrated at a 9/11 memorial service.

Before a crowd in Greensboro, N.C., she appeared in fine health, speaking energetically through much of her speech, and she used her illness to refresh a familiar campaign theme that had fallen by the wayside in recent weeks: her work on behalf of children.

“As you may know, I recently had a cough that turned out to be pneumonia,” Clinton told the audience. “I tried to power through it, but even I had to admit that maybe a few days of rest would do me good.”

“People like me, we’re lucky. When I’m under the weather, I can afford to take a few days off. Millions of Americans can’t,” she continued. “For millions of moms and dads, if they get sick there’s no backup. They’re on their own, aren’t they?”

Clinton caused a scare on Sunday at the 9/11 memorial in lower Manhattan when she left early after becoming dehydrated. A video showed her wobbling in front of her van and needing support from two Secret Service agents. She was diagnosed with non-infectious pneumonia last Friday, but did not disclose her illness.

A note from Clinton’s doctor, Lisa Bardack, said the candidate has been recovering nicely and recommended to take an antibiotic for 10 days.

In Greensboro, Clinton told the crowd that with 54 days until the election, she wanted to end her campaign the way she began, by focusing on families and kids. She recalled her work on behalf of the Children’s Defense Fund shortly after graduating law school. As First Lady, she played a leading role in the Children’s Health Insurance Program.

Her speech was a return to a milder and less combative Clinton, who in recent months has been sharpening her attacks against Donald Trump and repeating that he is unfit to serve as President.

She was self-deprecating about her public image, admitting as she has several times before that she is hardly the master campaigner her husband Bill Clinton is. “When it comes to the public service, I’m better at the service part than the public part,” she said. “I confess I’ll never be the showman my opponent is. That’s O.K. with me.”

She did mention Trump, however, chiefly criticizing his recently announced family-leave plan — which only provides unemployment benefits for six weeks for women — saying it should provide support for men as well. Senator Tim Kaine, her running mate, also criticized Trump’s plan earlier on Thursday for not providing sufficient benefits.

Polls in North Carolina show Trump and Clinton in a virtual tie, four years after Massachusetts Governor Mitt Romney defeated Obama there. Trump has gained on Clinton in recent polls and is edging her out in several key swing-state polls.

“When we go to the polls this November, the real choice isn’t between Democrats and Republicans,” Clinton said. “It’s about who will have the power to shape our children for the next four years of our lives.” 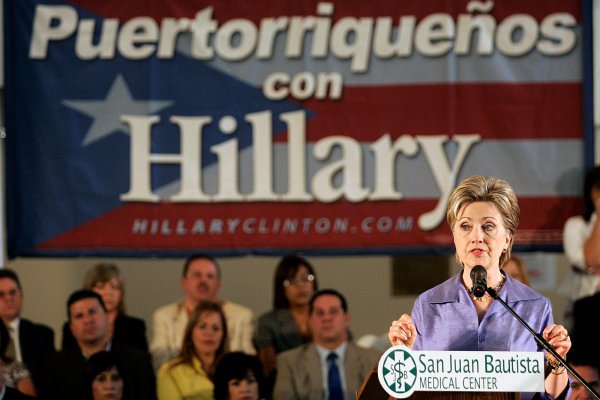 The Puerto Rican Wave That Could Boost Clinton in Florida
Next Up: Editor's Pick