5 Ways to Change Your Habits to Become More Successful

Crown Business
Ideas
By MJ Ryan
MJ Ryan is an executive coach and the author of the new book Habit Changers: 81 Game-Changing Mantras to Mindfully Realize Your Goals

What if you could permanently change your negative habits to positive ones to become happier and more successful? Most change efforts fail, not because we don’t want to change, but because we don’t know how. It is possible—if you work with the way your brain works.

To conserve energy, the brain creates habits of thinking and acting that become automatic. Such habits operate from the basal ganglia, the unconscious part of your mind, which means they are mostly invisible to you even as they form most of what you do all day. This is great when you’re brushing your teeth or driving your car. Who would want to have to figure that out every day?

But when it comes to something habitual that you want to change, your unconsciousness is precisely the problem. Without consciousness, you can’t choose differently. That’s why you find yourself saying after the fact, “I wasn’t going to eat a cupcake in the afternoon!” Or, “I was going to stand up for myself in that meeting.” Or, “I wasn’t going to yell at her. It just happened!” You end up doing the same old thing, not because you’re weak, but because you’re on automatic pilot.

To succeed, you have to bring awareness to what has been your habit so that you can make the new, better choice. The more you do this, the more your new behavior will eventually become autonomous, meaning you will no longer have to “think” about it—it will be your new habit. As someone who helps people change for a living, I’ve discovered five ways to speed the process of habituation along:

When pundits look at why habit change efforts fail, one of the main reasons is that people try to change too much: I’m going to eat right, be more patient with the kids and stop procrastinating. Your brain can’t remember all of that—being conscious about one habit is hard enough. Pick one thing, not seven. When you accomplish that, choose the next thing.

Is your change concrete enough? Many of us fail because we haven’t turned it into something to actually do. A client recently said she was going to work on being more balanced. “What are you going to do?” I asked. There was silence on the other end of the phone. Actions tell you how you’re going to do something—I’m going to go to bed earlier and exercise 30 minutes daily to have more energy; I’m going to spend half an hour a day relaxing with my feet up on the couch; I’m going to take a vacation. To succeed you must know what actions you’re going to take.

This is a one-line slogan, like a mantra, that reminds you of exactly what you want to do differently. Say you’ve been told you’re too bossy at work and are working on being more collaborative. You might adopt the slogan “Ask Don’t Tell.” Or you are quick to anger and want more equanimity. You might use “Stop, breathe, rewind.” Each of these tells you what you want to do differently and are pithy enough to remember. The more you say it, the more you will do it. These really speed the process of habituation.

4. Focus on the Horizon

To keep your momentum, take a tip from high-performance athletes. Look at how far you’ve come, not how much you have left to do. Scientists call this the horizon effect. It creates encouragement—“I’ve done twice as much as a week ago!” and builds determination—“I’ve made it this far; I might as well keep going.” Focus on the 10 pounds you did lose; the closet you managed to clean; the $1,000 debt you’ve wiped out; the evening you carved out for yourself.

The trick of change is to stick with it long enough to make the behavior automatic. Because your new behavior it not yet a habit, you are guaranteed to mess up and forget. Perhaps a lot. When you do, all you have to do is to go back to your habit changer slogan and begin again. The only difference between people who change and those who don’t is persistence. 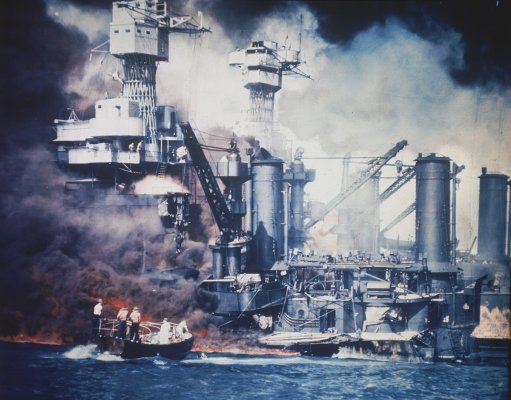 Why We Still Don't Know the Whole Pearl Harbor Story
Next Up: Editor's Pick