What was perhaps most surprising about American Horror Story‘s “surprise” sixth season—one whose plot details and even whose cast was not publicly revealed until the show started airing Wednesday night—was its simplicity. Granted, complications tend to pile up as seasons of superproducer Ryan Murphy’s hit roll on, but the premise, this time around, married formal experimentation with a sort of (perhaps literal) bare-bones visceral thrill it’d be hard to mess up. It’s far too early to say what lies ahead—not least because of the lack of information out there beyond what we’ve seen onscreen. But that much, at least, made me more excited about this show than I’ve been about TV for all of the long, fallow summer.

The episode was presented as part of a true-crime series called My Roanoke Nightmare, with Lily Rabe (Shelby) and Andre Holland (Matt) speaking directly into the camera about their life as a couple before and after their purchase of a tiny farmhouse deep in the woods. Before, they had been racing to escape the trauma of a random attack on the street that caused Shelby to miscarry. After, they were comfortable at first, up until attacks that seemed alternately like the work of racist neighbors unhappy to be living near an interracial couple (Shelby’s being held underwater in the outdoor hot tub) or like the work of some malign force (a rain of teeth from the sky). We see their lives at home in apparent re-enactments more lovingly shot than anything on Investigation Discovery—the re-enactment Shelby is played by American Horror Story regular Sarah Paulson, while the re-enactment Matt is first-timer Cuba Gooding Jr. (The two appeared together, of course, on this year’s other Ryan Murphy series The People v. O.J. Simpson, providing a frisson of sorts—prosecutor and defendant, together again.)

A lot of this was great fun, but it led to the realization that perhaps all the speculation over what would be the premise of the series were overblown. A bad premise can sink a show (as in last year’s American Horror Story: Hotel, whose underbaked hotel-of-killers-and-also-vampires plot seemed, from its first moments, reverse-engineered to give a showcase to Lady Gaga, with little thought given to anything else). But a good premise only goes so far. What sold the first episode of American Horror Story‘s sixth season was not the framing device or the details of the “theme”—which seems to be related to the events at “lost colony” Roanoke, but which mercifully is not being over-explained or overdetermined in the way Hotel was. The slow ratcheting-up of the danger faced by Matt and Shelby is something outside of any “theme” and more important than the casting news that has in recent years been the show’s main claim to press. The introduction of a third character, Matt’s recovering-addict sister (Adina Porter when speaking to camera, Angela Bassett in the action shots) added a new tone and manner of reacting to horror without, as so many subplots on the show have done even early on, derailing it. If it sounds like faint praise to say that a single episode of television stayed on the rails—well, Hotel was that rocky. And this season’s early going is that much an artistic comeback.

That’s the surprise of the show’s sixth season—that it can manage to feel stripped-down and focused after years during which the show was endlessly rewarded for going not just big but broad, with new characters, settings, and themes introduced seemingly for how they’d spark conversation, not for how they’d wear over time. The challenge of putting together a show that was not pre-sold to viewers, as recent ones have been with themes and castings that fans can obsess over online, seems to have activated some new creative intensity for a show not known for narrative tightness. Anything could happen, but this was the most promising start imaginable—in part because it didn’t indulge every single impulse. The grace notes the show allowed itself—the witty depiction of Shelby as a bougie yoga lover who likes her evening glass of wine maybe a little too much, the unapologetic plot holes that garishly remind you that yes, this is a horror story—were actually allowed to resonate, rather than being muffled by too much too-muchness.

There was one somewhat silly impulse, which came outside the narrative: Murphy himself appeared onscreen at the start of the show to introduce it, a bit of Hitchcock-like stagecraft merged with the imperatives of modern TV product placement. (He stood next to a Mercedes-Benz, the car company that was sponsoring the season; it was a way to fit the company in, given that neither Matt nor Shelby, both of whom drive on the show, appear to be Mercedes drivers, and Shelby gets into a car accident at episode’s end besides.) But why not? Murphy seems to have earned the right to preen a bit. The mere fact of keeping a season of television a secret, given quite how much goes into the production, is astounding. That the surprise seems to have given his show a new creative lease on life is, in a way American Horror Story fans can appreciate, almost fantastical. 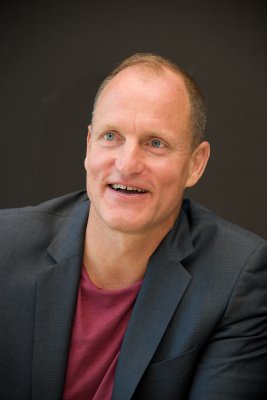 Here's a First Look at Woody Harrelson as Lyndon Johnson in LBJ
Next Up: Editor's Pick