If the kitchen is often the heart of the home, in the African American community it’s also the soul. Food is central to the black cultural experience, whether it’s dished out during times of celebration, mourning, comfort or joy—or shared between a family on a regular old Wednesday night.

That’s why the dining experience at the new Smithsonian National Museum of African American History and Culture, which opens to the public on Sept. 24, was designed to be a part of the museum’s mission, not just a place to get a snack.

“It’s the dining-room table you come to after you leave the exhibits to decompress,” says Carla Hall, celebrity chef and culinary ambassador to the museum. “It’s not just here to show off the food, it’s also to nurture your soul and your heart and your belly.” She imagines a family, fresh from wandering the halls of the vast 400,000 square-foot space, discussing what they just saw while sharing a meal in the open cafeteria.

That imaginary family may end up discussing the meal, too.

The food offered at the Sweet Home Cafe goes beyond soul food—though staples like buttermilk fried chicken and collard greens are available—to showcase the wide variety of foods developed and consumed by black Americans. The cafeteria itself is divided geographically, with stations carrying cuisine from the agricultural south, the Creole coast, the northern states and the western range. Each station’s entrées speak to the particular flavors of the region, from the Caribbean-style pepperpot and oyster pan roast to fried catfish po’boy and shrimp and grits.

Inspiration for the dining experience drew heavily from the works of cookbook author and culinary historian Jessica Harris. To Harris, food in the black community plays a dual role, as daily nourishment and a reminder of the past. Slavery, she told the Washington Post in 2011, gave black people a “denser history” with food. “We have planted it. Harvested it. Processed it. Cooked it. Served it. Cleared the table. Washed the dishes and emptied the chamber pot,” she said. “With all that, we have another, deeper attachment.”

For example, during the Transatlantic slave trade, West Africans were brought to the Carolinas to cultivate rice, a variety of which was actually brought over by the very slaves who were forced to harvest it. To this day, rice remains a staple food in Southern and Creole staples like hoppin’ john, a dish composed of black-eyed peas, rice, meat and onions.

As black people migrated throughout the country in the years before and after the Civil War, they informed food history wherever they went. The restaurant team sought to include menu items that would showcase the impact black cooks have had on both simple home cooking and haute cuisine.

“We want people to really understand African Americans were great cooks. We were true cooks,” says executive chef Jerome Grant. “We helped formulate American cuisine.” Grant previously served as the executive chef at the RAMMY-Award-winning cafe at the National Museum of the American Indian, but he says that being part of this new museum comes with a deeper level of personal attachment. As a native of Prince George’s County, Md., he still recalls the feeling he got when he smelled his Jamaican grandma’s pepperpot on the stove.

Outside of the restaurant, food is incorporated in exhibits throughout the museum, with a stools from the Greensboro sit-ins placed around an interactive lunch counter in the historical exhibit. In the cultural gallery, a collection of antique cookbooks is on display along with images of famous black chefs from George Washington’s chief cook Hercules to famous creole chef Leah Chase. Families and restaurateurs donated decades-old cast iron skillets, coffee pots and glassware to the museum’s collection which also houses a worn-in greens pot from the Florida Avenue Grill in Washington, D.C.

“What African Americans have contributed to American cuisine in general, not just soul food—I don’t think people realize how much of a hand African Americans have had in all types of cuisine,” says cultural gallery curator Joanne Hyppolite. “There’s no where in the United States where you cannot see that hand there.” 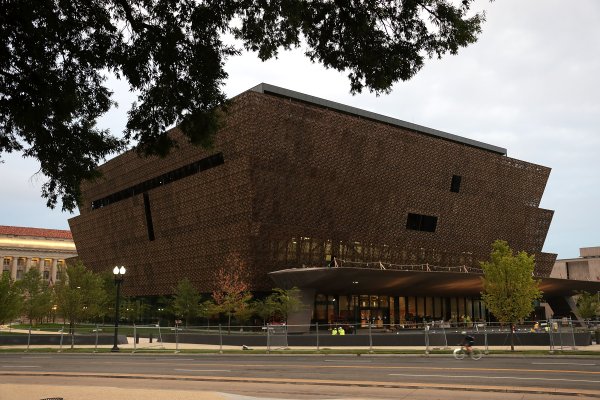 5 Things to Know About the Smithsonian Museum of African American History and Culture
Next Up: Editor's Pick