The Puerto Rican Wave That Could Boost Hillary Clinton in Florida

Anibal Camacho stood in a soupy-hot central Florida backyard on a recent Wednesday, making calls from his Puerto Rican-area code cell phone. “Papi, someone in Puerto Rico is calling!” someone on the other end of the line called out.

Camacho left the island two years ago seeking better schools for his grandchildren in the United States, but he never gave up his old phone number. It gives him something to chat about with fellow Puerto Ricans in Florida when he makes his pitch: Can you help volunteer for Hillary Clinton?

“We will have good participation in Osceola County,” said Camacho, debriefing under a palm tree after a sweaty couple hours making calls for Clinton. Donald Trump “doesn’t have knowledge of the Hispanic culture and working people culture. We Puerto Ricans don’t like his comments.”

In Florida’s I-4 corridor where presidential elections can be won or lost, Puerto Ricans like Camacho have been arriving by the tens of thousands every year, fleeing economic crisis at home. Spanish-speaking kids are filling up the local Little League rosters and island-style beans and fruit juices are stocking up the aisles in local supermarkets. Many arrive without a plan, sleeping in friends and families’ homes, hotels, or even park benches. Camacho’s family came over several years ago, and now he’s joined them for good.

As American citizens, Puerto Ricans can register to vote as soon as they arrive on the mainland. That fact is helping to boost Latino voter registration in the Sunshine State. Turnout in November among Florida’s Hispanics is expected to grow by 20% compared with 2012, according to data from National Association of Latino Elected and Appointed Officials. Hispanics are “causing Florida to each passing presidential cycle look more and more like blue state,” said Fernand Armand, a Democratic pollster in the state.

What is happening in Florida is happening nationwide, albeit at a slower speed. Swing states across the country will see record numbers of Hispanic voters this election. In 2012, 16.8% of the eligible voting population in Nevada was Hispanic, and today it’s 19%, according to data by the Brookings Institution, the American Enterprise Institute and the Center for American Progress. In Arizona it was 22.6%, now it’s 24.4%. Nationwide, white voters will make up 68.8% of eligible voters this year, compared with 70.7% just four years ago 2012, due in large part to higher minority birthrates. It’s a steady, irreversible trend that does not bode well for Republicans, whose volatile standard bearer has been turning off the United States’ fastest growing demographic.

Migration of minorities to new battleground states is making matters more complicated for Republicans. Black voters from New York and Illinois are moving south to states like Georgia, which is inching toward swing-state status and where polls shows a tight contest between Clinton and Trump. Much of the Puerto Rican growth in Florida is made up of older retirees from New York or New Jersey who were born in the states or arrived decades ago.

Whether or not the Clinton’s campaign can convince Hispanics in Florida to turn out to vote in large numbers could decide the election in November. The campaign has made a major investment in hiring Puerto Rican organizers, targeting local neighborhoods and businesses and drafting local community leaders. Hispanics registered to vote eight times faster than whites in the last four years in Osceola County, and five times faster in Orange County, Orlando. The campaign is advertising on Spanish-language television and radio and plans to be in newspapers soon. “It’s a natural base for us,” says Simone Ward, the state director for Clinton’s Florida campaign.

Restaurants like the Melao Bakery in Kissimmee show the shift. Biblical excerpts hang on the wall alongside sumptuous Puerto Rican beach scenes, as new arrivals from Puerto Rico stream in for home-style pleasures like mofongo or alcapurrias. They are ideal targets for the Clinton campaign, leading Clinton volunteers to often set up outside the restaurant, along with nonpartisan voter registration groups like Mi Familia Vota and the National Council of La Raza. Inside the bakery, locals trade tips for jobs and talk politics. When it comes to Trump, the talk is more bad than good. “He goes against the American constitution,” Lesbia Feliciano, a server who was born in Puerto Rico said of Trump, shaking her head. “I’m voting for the woman.”

Clinton herself has made a concerted pitch to Puerto Ricans, dispatching her campaign aides to the island and making campaign stops in Florida towns like Kissimmee. Many still remember when Hillary Clinton rode in a “caravana,” a pickup truck blasting music through the suburbs of San Juan before she won the Puerto Rican primary in 2008, and acknowledge her ties with the community in New York. “The Clintons have been very good in Puerto Rico,” said Rafael Benitez, a volunteer for the campaign.

Trump, meanwhile, has done himself few favors. His comments about Mexicans are not well-appreciated in enclaves like Osceola County, and the Clinton campaign has replayed Trump’s primary debate line, “we speak English, not Spanish,” in digital media and messaging. Trump and the Republican Party have made relatively few of the traditional campaign outreach efforts in central Florida, while the Clinton campaign has more than 50 offices and hundreds of staff.

The Puerto Rican migration, however, is not the only change that has been happening in the state, and there are some crosscurrents that could blunt their impact. At the same time that Hispanics are arriving in the state and turning 18 in greater numbers, older white retirees and Trump supporters continue to stream into Florida, partially offsetting the Democrats’ gains. Clinton cannot afford to run a campaign that is only about Trump: her favorability among Hispanics fell in August from 71% to 55%, according to a Washington Post/ABC poll, and she has spent little in recent advertising nationwide on motivating Hispanic voters.

A recent poll shows that Clinton’s support among Hispanics is lower than Obama’s was in November 2012. In Florida, she has support of 53% of Hispanics, according to a Univision poll, compared with 60% for Obama. She is ahead at 68% in the polls in Arizona, compared with 74% for Obama.

Obama succeeded in encouraging high turnout rates among Hispanics in 2008 and 2012 of close to 50% of eligible voters, but non-whites still tend to vote at much lower rates than whites. “The changing racial composition is an important part of what’s going on, but what won the election for Obama is the turnout among blacks and Hispanics,” said William Frey, a demographer at the Brookings Institution. Clinton is aiming to turn minorities out at the polls at levels comparable to Obama, but that may not be easy.

Meanwhile, Republicans are registering voters at a faster rate than Democrats in Florida, cutting the Democratic advantage in active voters from 535,000 in 2012 to 258,000 today, according to figures compiled by the Associated Press. Republicans made similar gains in North Carolina and Arizona. Some of those gains, however, reflect Democrats who have long voted Republican and are now officially changing their registration.

As the Clinton campaign makes the rounds, a third faction funded by the conservative Koch brothers named the Libre Initiative has sought to win over new Spanish-speaking arrivals with libertarian positions on tax policy and regulations. A small but well-oiled crew, they knock on doors and hosts food drives in predominantly Spanish-speaking neighborhoods in central Florida. Church visits accompany lectures on free-market principles. The outreach begins at job fairs in Puerto Rico, where staff hand out phone numbers. Some new arrivals make a Koch-brothers funded English class their first stop from the airport, where they come with luggage in hand.

The group’s Spanish-speaking canvassers are armed with iPads and savvy targeting apps and go door-to-door asking questions like a mirror image of a presidential campaign. Obamacare is failing in Florida, according to one question, so “do you think it’s just for people to pay taxes for something that doesn’t work?” Will big government solve our problems or “people’s liberty to make their own opportunities?”

Though the group says it is making inroads, Trump’s name at the top of the ticket has damaged conservatism’s reputation for many Latinos. The Libre Initiative, which has not endorsed Trump, does not register any new Latinos voters. Most of them would likely vote for Clinton. “It’s hard for people to say, ‘We’ll I’m going to back someone that doesn’t seem to support me,’” said David Velazquez, who is directing the Koch brothers’ efforts in Florida.

Still, if Republicans face an exodus of Hispanics, Trump’s comments about Mexicans immigrants being criminals and his stand-off with Univision reporter Jorge Ramos are not helping. Violeta Burges Lugo, who will vote for Clinton in November, recalled being a Republican when she first arrived from Puerto Rico, but no longer. “They don’t treat minorities well,” Lugo said, cooling off over an iced tea in a Panera Bread after registering voters near Orlando, Florida. “I don’t have anything for the Republican Party if they don’t have anything for me.”

As for Camacho, he says he has blocked out news on Trump now that he has committed to helping Clinton. “We have a saying in Spanish: ‘Palabras necias oidos sordos,’” he said. “When people say things without sense, you are deaf to what they say.” 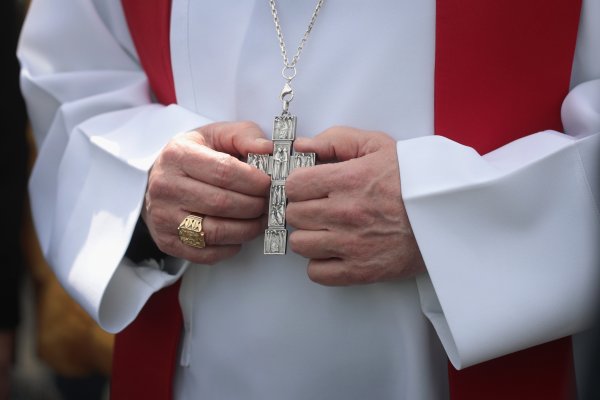 America Keeps Getting Less White and Less Christian
Next Up: Editor's Pick