Boyfriend of Teen Who Died From Brain-Eating Amoeba: 'I Lost the Love of My Life'

The boyfriend of a New York teenager who died from a brain-eating amoeba mourned the loss of his “soulmate” in an emotional new interview and recalled her final moments in which she “started to lose her mind.”

Luke Carquillat told People that his 19-year-old girlfriend Kerry Stoutenburgh’s health dramatically declined in the days following a trip to Maryland in which she went swimming in a creek last month and contracted the amoeba, called Naegleria Fowleri.

“When her head started pounding and she felt woozy, she got so scared, she had no idea what was going on, so I stayed with her,” said Carquillat, 20. “And then she started to lose her mind—crying and then going back to normal constantly and speaking incoherently and screaming and crawling on the floor.”

Stoutenburgh was declared brain dead on Aug. 30 and was pulled off life support the next day after a officials confirmed she was suffering from Naegleria Fowleri, according to the magazine.

“We were supposed to live a long life and have a family and now it’s all gone,” said Carquillat, who lived with Stoutenburgh in Brooklyn. “I got to experience true love for two years and I’m so grateful, but I lost the love of my life.”

Before she died, Stoutenburgh told her boyfriend that she loved him, according to People. “And I said, ‘I love you too, lovey,’ ” Carquillat said. “And then she was gone.” 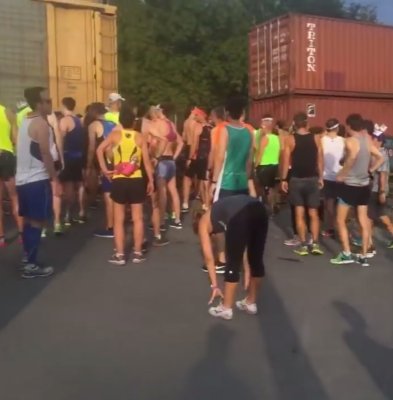 Marathon Runners Stopped by Train in the Middle of Race: ‘It Is Just Totally Demoralizing’
Next Up: Editor's Pick