How We Can Finally Get to Mars

By Jeffrey Kluger and Lon Tweeten

America is taking its sweet time about getting to Mars. In 1969, shortly after the Apollo 11 moon landing, the prediction was that we’d have boots on the Red Planet as early as 1975. So… how’d that work out?

The problem has been partly a lack of will, partly a lack of wallet and partly that getting to Mars is vastly, dauntingly harder than getting to the moon—largely because it’s so far away. At its absolute farthest, the moon is about 250,000 miles (402,000 km) from Earth. The corresponding figure for Mars is 250 million.

Still, NASA is hard at work on the problem. Astronauts are spending a year at a time aboard the International Space Station to study the impact of extended exposure to zero-gravity on the human body. Earth-based crews are investigating the psychological impact by serving similar long-duration rotations on the ground, as TIME explored in this week’s magazine with an overnight stay at a simulated Mars base in Hawaii. While a trip to Mars still won’t happen before at least the 2030s, we now know how we’d fly the route and the ships and machines we’d need if we finally go.

The workhorse for a journey to Mars would be NASA’s new Space Launch System (SLS), which basically means the rocket. There are two types of SLS’s now being built: a smaller one, capable of carrying about 70 metric tons of payload and putting crews in low Earth orbit, and a heavy-lift model that can loft nearly twice as much weight. Before any astronauts leave the ground, a number of heavy-lift SLS’s would go up, parking essential hardware along the route to Mars.

The crew that follows would likely be made up of four people and include one or more astronauts from at least one of the partner countries that would be sharing the work and the cost of the Mars mission. The astronauts would take off atop a smaller SLS that would carry them into space in their Orion spacecraft, a sort of 21st century Apollo moon ship, also under construction.

The crew would stay briefly in Earth orbit to check out their systems and then blast out on their seven-month flight to Mars—but they’d need to make a detour first. Just three days after launching, they would swing by the moon and pick up a bus-sized habitation module that a heavy-lift SLS would have left parked in lunar orbit. That’s critical, because while Orion, with an interior volume larger than the old Apollos, would be fine for a short journey, the crew needs a good deal more room to move around for an interplanetary flight.

When the astronauts arrived at Mars on what NASA expects to be the 217th day of their trip, they would find a descent module, similar to the insectile lunar module, waiting for them in orbit—also left by an SLS. All four crew-members would climb aboard and descend to the surface. One of them—someone whose identity is impossible to know right now but who is likely a late teen or young adult at large in the world already—would become the first person on Mars.

For this initial visit, the stay on Mars may be relatively short—just 30 days or less. That’s because the distance between Mars and Earth changes all the time, depending where they are in their respective orbits—with that 250 million mile gap sometimes shrinking to as little as 34 million mi. (55 million km). The crew would leave Earth as one of those close alignments is approaching and then leave Mars before the gap grows too wide again. Tarry more than 30 days on the Martian surface and you’re stuck for a year, waiting for the favorable planetary conjunction to recur.

The astronauts would leave Mars aboard an ascent module also placed there in advance. Once back in Mars orbit, they would link up with Orion and the habitation module, jettison the ascent module and light out for home. As they approached the moon seven months later, they would drop off the habitation module for use by the next crew, fly the rest of the way home and splash down in their Orion spacecraft 651 days after leaving Earth.

All that, at least, is the way things are supposed to go, but there’s a lot of metal to cut and hardware to build—to say nothing of money to allocate and spend—before human beings truly do become an interplanetary species. As in the old Apollo days, however, we now have the target in our sights, and are at long last doing the hard work of trying to hit it.

Write to Jeffrey Kluger at jeffrey.kluger@time.com and Lon Tweeten at lon.tweeten@time.com. 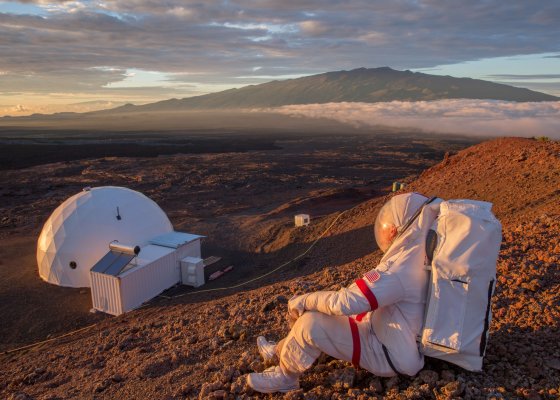 My Day on Mars
Next Up: Editor's Pick