Moms of Young Muslims Enlist in the Fight Against ISIS

When Ibrahim Kamara was fighting with Islamic extremists in northwest Syria, there was one person he wanted to reach out to: his mother. The British teenager recorded a video for her on his cell phone, another jihadi fighting alongside him told media outlets, but she never saw it. Ibrahim was killed in an air strike, another European son or daughter lost to a violent ideology that lures vulnerable youngsters to their deaths and appears immune to government efforts to counter it.

The love shared by mother and child, however, did not desert Ibrahim during his short time on the front. That powerful bond is now being used as a weapon to combat radicalization, in a continent reeling from a wave of ISIS-linked attacks. A course devised by Edit Schlaffer, an Austrian sociologist, for troubled regions like Kashmir is now taking off in cities across Europe, aiming to put mothers on the front line of the battle against Islamic extremism.

On a recent July morning, the first British graduates of the Mothers Schools, which Schlaffer runs through her Vienna-based NGO, Women Without Borders, gathered at the town hall in the city of Luton in England. Over 10 weeks, 45 women had attended sessions on subjects like monitoring Internet access, better communicating with teenagers and identifying signs of radicalization in children. “We as mothers are so close to our children, we have to bring sense into the world, and we have to start with our children [and] guide them through these troubled times,” Schlaffer told them. “Mothers will make this world safe for us all.”

Ibrahim Kamara’s mother Khadijah took the train from her home in the seaside town of Brighton to attend one session during the course. She spoke to the women about her journey of anger, hurt and denial after Ibrahim left and was killed in Syria—a powerful warning of what could happen if mothers were blind to the signs of radicalization. “It’s been an eye-opener,” said Rozina Jarral, 39, who wanted to learn how to better relate to her 13-year-old son. The most surprising fact, she says, is how ISIS has used the Internet to promote its extreme ideology and recruit fighters. “I didn’t realize about social media and how that could lure children in. What I took away from it was how to create a loving, caring environment at home, to keep the communication going, because when there are arguments at home they will want to go outside, and that is where people could take advantage.”

After the graduating class received their certificates, Schlaffer was on the move again. She can be a hard woman to pin down, as she darts between European capitals, organizing courses and giving lectures on her prescription for a crisis that has baffled governments and security services. As dozens die in terrorist attacks in Europe and the flow of fighters to Syria continues, anyone offering a panacea is in great demand.

Schlaffer devised the Mothers School course in 2013 after a project in Tajikistan, where women told her about their concerns about the growing influence of Wahhabism, an extreme branch of Sunni Islam. She conducted a survey of 1,000 people to find out how strong an influence a parent can be, and designed a course based on the findings. The courses were then rolled out across Pakistan, India, Indonesia and parts of sub-Saharan Africa. Over 1,500 women have since graduated. But Schlaffer said she “never dreamed of doing the same work” in Europe.

Yet the continent is far from immune to the forces of extremism. Up to 4,294 Europeans have travelled to fight with radical groups in Syria and Iraq, according to the latest figures from the International Centre for Counter-Terrorism in the Hague. Many have returned radicalized; at least five of the men who killed 130 people in Paris in November 2015 and two of the extremists who murdered 32 people in Brussels in March had spent time with Islamist militias in Syria. Attacks claimed by ISIS in France and Germany over the summer have also added to a continent-wide sense of unease. “We have always worked in countries of crisis and transition, and all of a sudden [we have] this crisis of identity in Europe,” Schlaffer says. And mothers, who spend so much time with their children, “are so strategically placed to serve as a buffer between radical influences and those who are targeted.”

Read more: These 5 Facts Explain Why Europe Is Ground Zero for Terrorism

Luton, a commuter town just north of London, was not chosen at random as the first British location for Mothers Schools. It has been the subject of lurid headlines branding it a “hotbed of extremism” over its links to the July 2005 London bombings and another foiled terror plot. When 12 members of one Luton family left to go and live in ISIS-controlled territory in Syria last year, attention fell on the potential for radicalization among the city’s 50,000-strong Muslim population.

The course there is funded by a government-backed program, Prevent, designed to combat radicalization. Its effectiveness came under fierce scrutiny in August, when it emerged that Kadiza Sultana, a London schoolgirl who travelled to Syria in 2015 with two friends, had been killed there. Lawmakers and Muslim groups have been particularly critical of Prevent’s onus on schools and other public bodies to report signs of extremism to authorities. Labour MP Rushanara Ali accused Prevent of stigmatizing Muslims, while the Muslim Council of Britain called it “counter-productive.” Britain’s Security Minister Ben Wallace told TIME that Prevent “is about safeguarding people of all faiths and backgrounds” and argued that it was right for teachers to monitor their pupils for extremism “in the same way they support children who are at risk of child abuse or domestic violence.”

But such feelings of mutual mistrust between governments and Muslim populations have been one of the many barriers to forging successful strategies to combat ISIS propaganda. Different nations across Europe have widely differing approaches, with some viewing potential recruits and returned fighters from a criminal perspective, while others focus on community-led prevention and rehabilitation.

So the Mothers Schools could be seen as an attempt by the U.K. to pursue a less securitized and more inclusive approach to the issue. Nico Prucha, a research fellow at the International Centre for the Study of Radicalization at King’s College London, says that this kind of outreach program can be an effective way to target the community without alienating it, but cautions that a one-size-fits-all approach is unlikely to succeed. “We need to see what resonates in which local community,” he says, adding that this is also the approach taken by ISIS in seeking recruits. “There is not a unified message. It is always about personalization and getting a package that suits you.”

Many of the attendees at the Mothers Schools in Luton said they had not been aware that it was part of a broader effort by the government to stem the flow of British youngsters heading to Syria. “In the community, if you go and say, ‘We’re trying to stop radicalization,’ then not many women would come,” explains Fatima Begum, a local community organizer who was one of the two Luton trainers. “So we had to think of a strategic way of selling it—it’s an English course, and it’s a parenting course.”

Plenty of neighboring countries are figuring out how the course works for them too. Mothers Schools have also taken place in Belgium and Austria this year. The next school is in Macedonia, then Germany and France later in 2016. Also in the pipeline are Fathers Schools and emergency schools in refugee communities across Europe. The women in Luton spoke enthusiastically about the confidence the course had given them. “When my husband speaks to me disrespectfully, now I say, ‘Never talk like that in front of the children,’” said mother of three Jubera Aktar. She also keeps a close eye on the home computer, regularly asking her children what they look at online.

But there is anger too. One of the women attending the graduation stood up and simply held aloft a cell phone. On it was a video of a politician urging people not to blame all Muslims for the actions of a few, a viewpoint she clearly wanted to share with the non-Muslims at the ceremony. The recent terrorist attacks have led to a rise in Islamophobia and strained relations between communities that threaten to further alienate young Muslims. The ongoing row in France over banning full-cover swimwear that adheres to strict Islamic dress codes, and attempts to limit the wearing of full-face veils in Germany are just two examples. These mothers will do everything in their power to keep their children safe, but the prejudice of others is out of their hands. 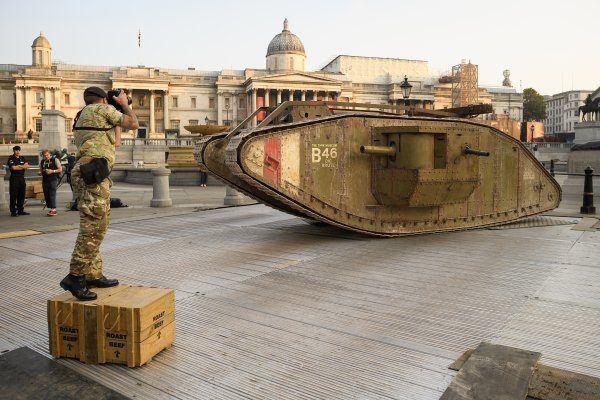 The Tank Was First Used 100 Years Ago Today
Next Up: Editor's Pick