Donald and Ivanka Trump attend the third day of the Republican National Convention on July 20, 2016 in Cleveland, OH.
Joe Raedle—Getty Images
Ideas
By Belinda Luscombe
Luscombe is an editor-at-large at TIME and the author of Marriageology: The Art and Science of Staying Together.

Almost 50 million full-time workers in the U.S. labor force are women. That, according to U.S. Census figures released on Sept. 13, is the highest number of female workers ever, triple what it was 50 years ago.

If America is going to continue to prosper, many of those working women are going to need to have kids. And kids, as it turns out, are useless at looking after themselves, at least for the first decade and a half. They need a lot of labor and attention.

Despite this biological immutable, the U.S. has continued to treat family leave—both maternity leave for the delivery of children and parental leave for ensuring the survival of said children—as an extra, something best left to employers to provide, an enticement they might use to attract a better level of employee.

And some employers are stepping up. The tech industry has famously generous family leave policies, including up to 26 weeks paid family leave at Etsy. It’s not just coastal lefties either. Earlier in September, those pinko radicals at advisory giant Deloitte started offering 16 weeks of paid family leave to any employee male or female who needed to look after a family member. And any Deloitte-ite who bears a child can get six months paid leave.

Consultancies and tech titans have cottoned to the fact that to attract and retain a highly-skilled, highly-educated workforce, you need to acknowledge that they have families and they need to look after them. Yet only 11% of American workers have access to any paid family leave at all. And only 40% have access to federally mandated unpaid family leave.

Not coincidentally, those same new U.S. Census figures show that about 50% more women age 25 to 44, the prime childbearing ages, are living in poverty than men. This is largely as a result of motherhood—and it is evidence of how well employer-provided family leave policies are working out on the whole.

Donald Trump’s new childcare policy, one of the very few detailed plans he has presented, offers some heartening proposals. Any time a Republican nominee for President proposes six weeks mandated maternity leave, parents have a reason to cheer. (Babies do too, except it’s usually beyond their skill set at that age.)

Hillary Clinton is promoting 12 weeks parental leave, taken by either gender, so the really good news here is that whoever is President come 2017 has promised that American women won’t have to worry about getting how quickly they can get back to work while they are in labor.

But childbirth is just the first step in a very long parenting journey. Childcare is a much bigger issue. Trump has reportedly said in the past that employers are only getting 84% of their working moms’ brains, because there’s a part that’s always thinking about their kids. He did not say, but could have, that the reason for this is because they’re worried about their childcare arrangement.

A 2013 study from the National Bureau of Economic Research suggested that the U.S. has fallen behind other developed nations in the proportion of women who are participating in the labor force in the last 20 years because its childcare policies lag behind those of other countries. Women, faced with expensive and complicated options for their kids’ care often find it simpler and more financially expedient, as the lower earner, to stay home or move into part time work. This, as many have noted, has a negative effect on their lifetime earnings, level of experience and career prospects.

Trump’s proposal for helping working parents look after their kids acknowledges the fact that parents who stay home to look after their kids are also working, by offering them a rebate. But because all his methods for paying for childcare involve rewriting the tax code, they effectively only reward the wealthy, those who make enough to need a tax break.

Under his plan, parents will be able to deduct the cost of childcare from their tax bill, up to a certain amount. They will also be able to use their pre-tax income to set up a fund to pay for childcare and education expenses. Parents who don’t make enough for this to be feasible can be paid back through the Earned Income Tax Credit (EITC).

The EITC has been a very useful economic tool for alleviating hardship. Nine million more people would be in poverty without it. But it’s unclear how much more it has to give. Theoretically, once people have got back all their taxes, there is no more they can claim against.

So while Trump’s plan will be great for his daughter Ivanka’s less pecunious friends (she’s too wealthy to qualify herself), it’s based on the presumption that parenthood is a luxury akin to other things you can claim against your taxes, like donating to charity or sending your kid to college. Not a biological imperative, like propagating the species.

Clinton’s childcare plan, meanwhile, is to cap childcare expenses at 10% of any family’s income. Any shortfall will be made up by the taxpayer through block grants to states. Experts say it’s an ambitious proposal, by which they mean expensive and tricky to get through Congress.

Interestingly, the same new Census figures that showed a rise in the number of working women also showed a much higher level of prosperity all round. In particular it showed that many more people who lived in states where the Affordable Care Act led to an expansion of Medicaid now have medical insurance. These so-called expansion states had drops in the rate of uninsured among the poor from 35% to fewer than 20%. Non-expansion states also experienced small drops but more than 35% of those living in poverty in those still had no health insurance at all. It seems like the Affordable Care Act has had a positive effect.

So perhaps what America really needs is another ACA, only this time it’s the Affordable Childcare Act. States could set up exchanges, as they did with Obamacare, and negotiate with providers to get the cheapest rates of childcare for their citizens. They could expand, or create, state run child care services, or contract with local providers to get a good price on quality childcare.

America could encourage, in essence, Nanny states. Yes, that name is unfortunate. But in this case, it’s actual children we’re talking about. What’s the point of having the world’s biggest economy, if you can’t look after your smallest citizens? 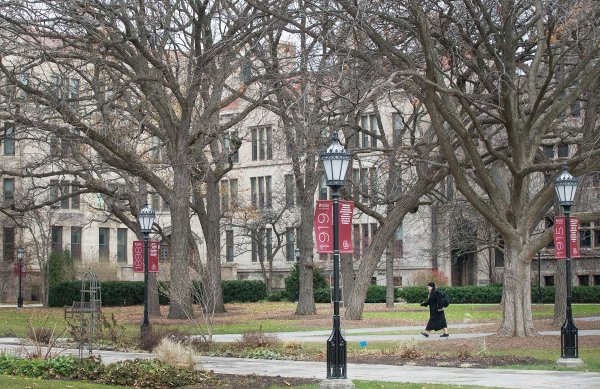 U Chicago Professors Speak Out on Trigger Warnings
Next Up: Editor's Pick