Sean Gregory and Jon Lovitz on the season finale of The $100,000 Pyramid, hosted by Michael Strahan on the ABC Television Network, Sept.12, 2016.
Lou Rocco—ABC
By Sean Gregory

It was early on a Sunday morning in April and I was in a green room on the Upper West Side of Manhattan, minutes away from one of the strangest, least expected and most incredible moments of my life. On a lark months earlier, I had applied to be a contestant on the new ABC reboot of the $100,000 Pyramid, hosted by Michael Strahan. I loved the old show and never expected it would be revived, let alone with me as a contestant. How the hell did I get here? I wondered. Is this really happening?

As a kid in the 1980s, I loved staying home sick from school because it meant I could watch The $25,000 Pyramid. The show, which aired weekday mornings on CBS and was hosted by Dick Clark, paired celebrities like Betty White and LeVar Burton with civilian contestants in game of word association. The goal was to get your partner to guess the answer without saying the phrase in question. For example: Betty White: “It moos and makes milk.” Contestant: “cow.” Ding. The team that compiled the most correct answers in the main game advanced to the fast-paced, big-money round known as the Winner’s Circle. There, the clue giver rattled off a list of items that fit a category: for example, “roses, blood, painted nails” for “Things That Are Red.” The subjects got more difficult the higher you climb, with the top of the pyramid often something conceptual such as “Things That Are Sensitive.” If the team got six before the 60-second buzzer, the contestant won up to $25,000. Bells rang. Theme music blared. The celebrity and civilian embraced.

I was hooked. Like so many back in those days, I used to play along by shouting clues at the screen that the players should have been giving. Pyramid was much more accessible than, say, Jeopardy: the game required quick thinking and verbal acuity, but you didn’t have to be a trivia genius to clear a board. And my interest never waned. When my college teammates and I traveled to Italy for an a basketball exhibition tour, we played Pyramid to pass time on long bus rides. I would make up the categories and answers and pretend to be Clark, moving the game along, telling the “contestants” what they should have said after the fact. Clearly I was in deep.

So when I heard earlier this year that the show being revived for a 10-episode summer run, I figured, why not? I taped a brief audition video on my phone and sent it over the transom. Amazingly, I got a response, and after a Skype interview with the producers, I was cast.

It’s one thing to hold onto a childhood dream, but it’s another to get a crack at it decades later. So on that Sunday I took a car to ABC’s New York City studio near Lincoln Center and prepared for a surreal experience. After shuttling backstage, the contestants met each other (a number of shows are taped in a single day). My opponent, Lisa, could not have been more gracious. For all the money at stake, the vibe wasn’t ruthlessly competitive. There is a certain bond with the people you’re going up against. Sure, you want to beat them in the game. But you’re also sharing this strange experience together.

The producers put us few through some practice rounds, and then, as if quite suddenly, you’re backstage making quick small talk with the celebrities for that episode. My draw: comedian Jon Lovitz and NFL Hall of Famer turned broadcaster Deion Sanders.

I walked out onto the set, and briefly looked out into the studio audience. I would guess there were a few hundred people there, but I tried to tune out the crowd, and the cameras. Just focus on the game, as if I were playing with all my Pyramid nerd friends. When the show began, I tried my best to remain calm. I was paired with Sanders, and we struggled in the first round. When I was giving the clues, the first answer was “Oscars.” I said, “Another word for the Academy Awards,” and when Sanders didn’t say “Oscars,” I went to Plan B: “Blank the Grouch.” We got stuck, passed to the next one and never really recovered. Teamed with Lovitz, Lisa got to the winner’s circle first.

I was disappointed, but I can’t pin it on Sanders: the pressure was intense and different partners connect––or not––at different moments. But I still had one more shot. Lisa and I swapped partners for the second game, and Lovitz turned out to be great at giving clues. He didn’t say much, which helps save time, and was right on point. When I was giving clues, one answer was “rainbow.” I said “After it rains …” then heard the dreaded Pyramid “cuckoo” sound, which signals an illegal clue––you can’t even say part of the keyword in the clues. I slammed my hand on the desk, enraged at myself. Why didn’t I say “Somewhere over the …” and let Lovitz complete the thought? Still, we were able to eke out the win.

Then it hit me. Holy s–t, I remember thinking, I made it to the winner’s circle! After all those years playing along on TV — and playing make-believe host to entertain friends — I had my prime time shot.

Even with a $50,000 prize on my mind, I felt more relieved than nervous. It would have been tough to have my big chance and never make it to the circle. Off camera Lovitz, who would be receiving my clues, gave me some useful advice: keep things simple. He tried to keep me relaxed, but producers built up the tension: the studio goes silent, the lights go dim, Strahan says go–and we were off. We got the first three–“Things You Write With,” “What An Ice Cube Might Say,” and “Things At A Movie Theater”–in good time. I actually forgot the fourth category after the fact. Turns out it was “Things You See At A Parade.” On the show, I composed myself and said “The Grand Marshal.” Have to admit I was pretty pleased with that one. Lovitz got it right away.

After “Why You Ride An Escalator”–“because you’re in a mall and want to go up”–the top of the pyramid was revealed: “Things That Hold Water.” I mustered “a bathtub.” Then my mind went blank. I knew we had plenty of time, but panic was starting to set in. But seemingly out of nowhere, he said it: “Things that hold water.” I rose from my chair, hands up, and almost mauled Jon Lovitz with a bear hug. I told Strahan I couldn’t believe I almost blew it. He laughed.

For months since the taping, people have asked me how I did on Pyramid. I couldn’t share the results (thankfully my wife was in the studio audience, so she knew). So when some family members and friends gathered Monday night to watch, they exploded when Lovitz bailed me out. My oldest son, who’s 10, had demanded that we sit next to each other as it aired. He’s watched the show all summer, lapping it up just like I did when I was his age. After the final clue, the two of us embraced as if we had just won the World Series. It was unforgettable.

Turns out enough other people watched this summer that ABC has renewed the $100,000 Pyramid for a second season. Why not give it a try? You may get to live out a childhood dream––or at least slam into a celebrity. 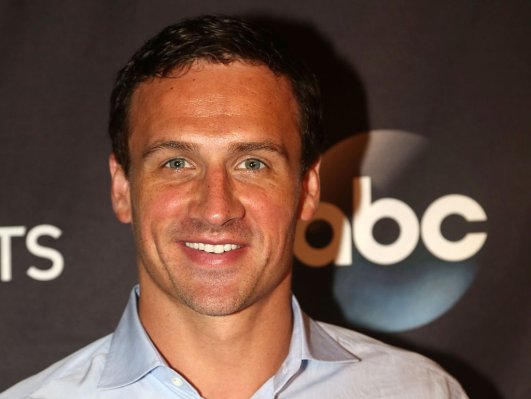 Ryan Lochte Says Dancing With the Stars Team Is His 'New Family' After Protest
Next Up: Editor's Pick