Republican presidential nominee Donald Trump holds a Purple Heart, given to him by veteran Louis Dorfman, during a campaign event at Briar Woods High School in Ashburn, Va., on Aug. 2, 2016.
Alex Wong—Getty Images
Ideas
By Justin Constantine
Justin Constantine is a leadership consultant, entrepreneur, Fellow with the Truman National Security Project, a Presidential Leadership Scholar, White House Champion of Change and the author of My Battlefield, Your Office

As a Marine officer, I learned to embrace diversity, follow the chain of command and listen to experts. As a Purple Heart recipient, I came to value the importance of dignity and respect, especially when it comes to those who have sacrificed. Those values lead me to an inescapable conclusion: military veterans should think long and hard before voting for Donald Trump.

Veterans could prove decisive in this election. Currently, the Republican nominee enjoys less support among veterans than John McCain and Mitt Romney did at this point in their campaigns. John Noonan, national security adviser for Romney said: “Trump will have to over-perform with veterans to overcome his deficiencies with Hispanics, African-Americans, women, and college-educated whites.”

1. His personal record and public comments make a mockery of our military service.

Trump deferred the draft for the Vietnam War four times while in college. When he graduated in the spring of 1968, earning his eligibility to be drafted and sent to Vietnam, he received a diagnosis of bone spurs in his heels, making him unfit to serve. Trump failed to mention his medical deferment when he asked by ABC News last July.

Trump has also said that avoiding contracting a sexually transmitted disease was his own “personal Vietnam,” that Senator John McCain was not a war hero and that he “always felt that [he] was in the military” because of his education at the New York Military Academy.

2. He knows nothing about sacrifice.

Trump crossed a red line when he chose to attack Gold Star parents who appeared at the Democratic National Convention. The Khans are a Muslim family, and although their son died in service to our country defending what we stand for, Trump took this opportunity to throw more red meat to his supporters. Trump summed up his faulty understanding of sacrifice when he said: “I think I’ve made a lot of sacrifices. I work very, very hard. I’ve created thousands and thousands of jobs, tens of thousands of jobs, built great structures.”

3. He knows very little about our military and overarching national security apparatus.

Wall Street Journal reported last month that Trump refuses to read position papers. In a world of complex diplomatic relationships, nuclear weapons, competing national interests and deadly enemies, his inexperience could have severe consequences for our country. He also has publicly admired Vladimir Putin, claimed to know more about ISIS than the generals do and even said numerous times that President Obama was the founder of ISIS. Fifty of the most noted Republican national security experts dating back to President Nixon’s administration, including Michael Chertoff, Tom Ridge, John Negroponte and Michael Hayden recently signed an open letter explaining why none of them will vote for Trump.

Trump displayed his ignorance of our military most obviously when he recently accepted a Purple Heart medal from Army Lieutenant Colonel Louis Dorfman and said: “I always wanted to get the Purple Heart. This was much easier.” All veterans should really stop and think about that response. When I was awarded my Purple Heart, given to those wounded or killed in action, the presenting officer said that it was a medal that nobody really wants, and he was right.

4. Trump does not provide straight answers based on serious thought.

There seems to be no issue on which Trump has not flip-flopped his opinion, including his position on gun control, his proposed ban on Muslims and his view on sending in U.S. troops to defeat ISIS. He also constantly says that he never supported the war in Iraq. As it turns out, professional fact checkers can find no such statement from Trump before the war, and, in fact, he told Howard Stern six months before the war started that he supported it.

Many veterans supported President Reagan, and Trump has periodically likened himself to Reagan. Unlike Trump, when Reagan ran for president, he had a proven conservative track record after eight years as the governor of California, our nation’s most populous state; Trump has absolutely no public experience and a checkered private-sector career. Reagan was a great communicator and it was easy to understand his vision and how we could get there; Trump relies consistently on empty expressions devoid of meaning such as “I will be so good at the military that your head will spin.”

I understand that many veterans do not like Hillary Clinton because of her involvement in the Benghazi tragedy and her email scandal. The tragic deaths in Benghazi are terribly sad, but I hope voters make their opinions based on the findings of the recently released House Republican committee report that did not blame Clinton and actually highlighted critical failures by our military. And Clinton’s server issues are disturbing to me, especially after working in the intelligence community for several years. But her faults pale in the face of Trump’s complete lack of understanding of our military and our national security.

Do not blindly give Trump your vote. He does not have our best interests at heart. 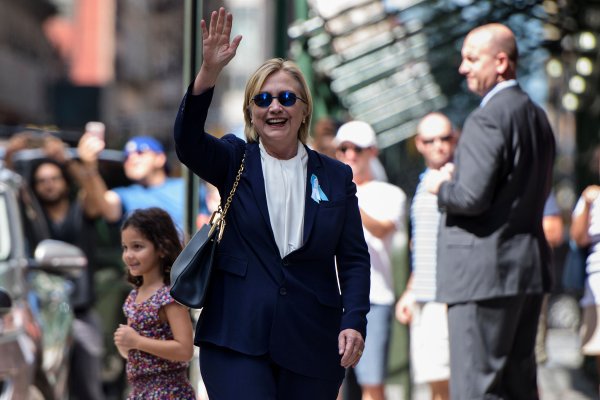 Women Are Taught to Work Through Sickness and Pain
Next Up: Editor's Pick