Americans Are Making More Money, Except for the Ones That Aren't

Americans finally got a raise last year. The U.S. Census announced that the median American income rose more than 5% to $56,516. It’s the first significant raise in eight years and the biggest median income jump in 17 years.

The rising income tide lifted many boats. All ages saw an uptick in median income, which is the wage directly in the middle of what Americans make: 50% make more, and 50% make less. It was up among both genders, all four regions of the country and all races, except Asian, whose median income was the highest anyway, at more than $77,000. The reason for the hike, says Trudi J. Renwick, one of the assistant division chiefs at the Census Bureau, was largely the rise in employment.

Moreover, fewer people were living in poverty, with a drop from 14.7% to 13.5% in 2015, making this, says the bureau “the largest decline in poverty rates over the past 16 years.” And the decline in poverty also applied nearly across the board: all ages, all races except Asians and all regions except the Northeast.

But before we start popping the corks and proclaiming that the good times are here again, there were some depressingly stubborn figures emerging from the new report as well. For example, 10% of U.S. households live on less than $13,300 a year. Almost 20% of American children under the age of 18 live in poverty. More than 20% of Hispanics live in poverty and almost a quarter of African Americans. Women are still much more likely to be living in poverty than men.

A family is defined as living in poverty if they make less than what the policy wonks think they need to make to live. So a family of two adults and two kids would be living in poverty if their income was less than $24,036. For a family of three kids and one adult the number is a little less: $24,120. (Of course, that family’s chances of making that much are far less as well.)

In practice, this means that even as America recovers from the economic shocks of 2008, it has not solved some fundamental problems for its poorest citizens. In 2015, more than 43 million Americans, or the equivalent of the population of Argentina, did not have what they needed to get by. Worse, slightly more than 6% of Americans had even more meager means, less than 50% of the poverty level. That figure only went down half a percentage point in the past year.

To put that in real numbers: something like 20 million Americans live in homes that do not have even half of what they need to keep themselves housed and fed. The improving economy simply isn’t reaching far enough. 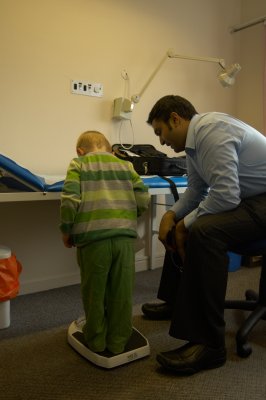 How to Talk to Kids About their Weight
Next Up: Editor's Pick