Women Are Taught to Work Through Sickness and Pain

Democratic presidential nominee Hillary Clinton waves to the press as she leaves her daughter's apartment building after resting in New York on on Sept. 11, 2016.
Brendan Smialowski—AFP/Getty Images
Ideas

Although Jen Palmieri, Hillary Clinton’s communications director, acknowledged that the campaign should have let the press know sooner that Secretary Clinton was fine, following her leaving the 9/11 memorial for health reasons on Sunday, working women have known for decades that even when you’re sick, you work. Mothers joke that they aren’t allowed to get sick, and advertisers rake in profits for cold and flu relievers that allow moms to go on doing their jobs. And women in the workplace, often judged for how strong or weak they are, regularly come to work even when they should be home in bed—even when society should allow for rest and recovery.

I learned this lesson early in life. During my early professional years, somehow my body knew it had to wait to get sick until it was time for annual leave. So I ended up spending my vacation time nursing bad sinus infections or flu, before flu shots. Later in my professional career, I simply learned to soldier on, no matter what.

During the Iran negotiations, which I led as the Undersecretary of State for Political Affairs, I found myself rushing from a secure Senate briefing to a secure House briefing, and then down the spiral stairs in the underground secure congressional facility. Unfortunately, I stumbled and my hand remained on the banister while the rest of me catapulted forward. My pinkie finger, now at a right angle to my hand, sent pain throughout my body. Nonetheless, I quickly asked a colleague to get me an ice pack, did the entire House briefing and only then went to the emergency room, to find out I had ruptured several tendons. Ironically, it was perhaps one of my best briefings since I had to stay laser-focused so the pain wouldn’t overwhelm me.

At another point in the negotiation, while in Vienna at the Palais Coburg Hotel, I headed to the U.S. delegation room at the top of the hotel where we had a secure phone. Secretary John Kerry and I were due for a conversation at about 11 p.m. Vienna time so I could report on progress and Kerry could issue any revised instructions. The delegation room had a glass door that we always left open since the outer area was secure. That night, however, the door was closed and I slammed right into it, preoccupied with thinking about the conversation to come. Blood spurted everywhere, and colleagues screamed for someone to call an ambulance. I asked all to be calm, explaining that they clearly weren’t moms. Blood like this was a common occurrence for kids, no ambulance was needed, just an ice pack so I could do the call with the Secretary. I did the call, and the Secretary did not know for many months what had happened. In fact, my nose was broken in several places, as I found out the following day when I went for a CT scan. Nonetheless, makeup and my eyeglasses covered most of the deep black and blue and neither the Iranians nor most of my P5+1 colleagues ever knew what had happened.

This approach to illness and pain is not unique to me as a woman professional. Another female colleague, working on the Democratic platform committee, went out for a very early morning run in the heat of Phoenix. In the last half mile of the long run back to the hotel, likely dehydrated and jet-lagged, she stumbled, and both banged herself black and blue and took a serious cut to her head. She made a quick trip to the emergency room, got stitched up, and then simply walked into the proceedings and resumed her work.

So it’s no surprise that Secretary Clinton simply believed that a mild case of walking pneumonia was no reason for a fuss; she simply had to go to work. I had the privilege of working for her while Undersecretary and, as some may recall, she broke her elbow in her tenure. But that injury never broke her stride, her work ethic or her pace to seek change for the better for America.

This is not to say that guys don’t sometimes act as focused as we women do. Certainly, Secretary Kerry showed amazing fortitude when he conducted negotiations shortly after a broken femur. But ask any working mom who works full time at home and full time in the office, and you will find an indomitable human being who only wants the best for her kid, her grandkids and her country. That woman goes to work every day—even when she is sick—because that’s what women do. 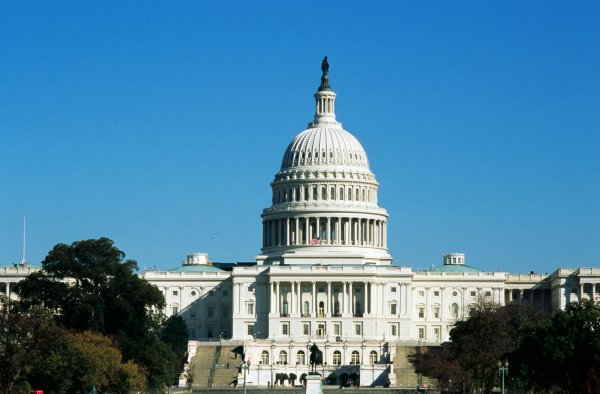 The Surprise Bipartisan Success Story of Congress: American Aid
Next Up: Editor's Pick