The premiere of Dancing with the Stars was filled with exciting moments, but the most enjoyable was ’90s rapper and reality television star Vanilla Ice, who is also known by his given name, Robert Van Winkle, making his ballroom debut with a cha cha set to his very own hit—“Ice Ice Baby”.

The performer teamed up with pro Witney Carson for a routine filled with callbacks to ’90s choreography, over-the-top hip-hop moves, and a few of the classic cha cha steps. And, because this was Dancing with the Stars, they did it all clad in sequined red, white, and blue jazz pants with apparent spray tans to make their smiles seem extra white and shiny.

When the song choice was announced, Van Winkle claimed he was concerned about embarrassing himself to his own song, but Carson simply told him, “stop, collaborate, and listen” and they worked out their routine. Watch the clip above below to see whether that prediction became true or not. 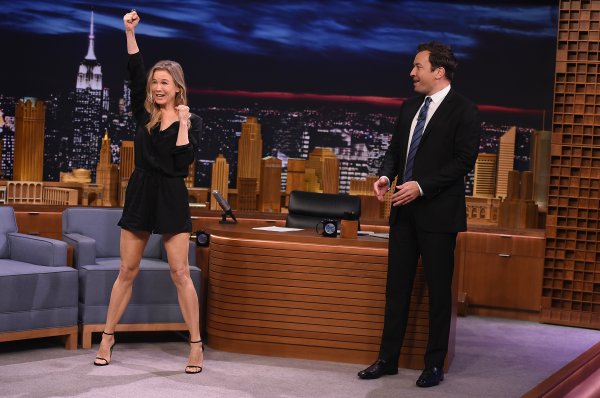 Watch Renée Zellweger Try Out Her Cheerleading Skills
Next Up: Editor's Pick