“I’m not really sure why the media keeps dropping David Duke’s name. Donald Trump has denounced David Duke repeatedly, we don’t want his support and we don’t want the support of people who think like him,” Pence said, when asked on CNN whether some of Trump’s supporters, including Duke, would fit into a category of “deplorables.”

The interview followed Clinton’s remarks last week, in which she said half of Trump’s supporters belong in a “basket of deplorables” characterized by “racist, sexist, homophobic, xenophobic, Islamaphobic” views.

When asked specifically in the CNN interview if he would call Duke “deplorable,” Pence said, “I’m not in the name-calling business.”

Clinton apologized on Saturday for saying “half” of Trump’s supporters could be characterized that way, but also said she would continue “calling out bigotry and racist rhetoric” in the presidential campaign. In his interview on Monday, Pence again denounced Clinton’s comments.

“For her to rattle off this litany of pejoratives was just really shocking,” he said. In a subsequent interview on Fox News, he again denounced Duke but said he is not a “name caller.” 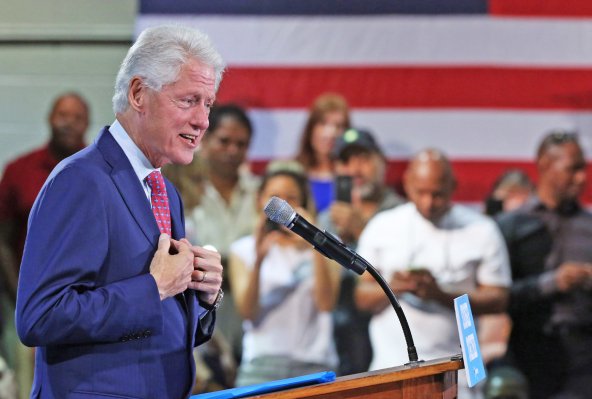 Bill Clinton Says Hillary is Doing Fine and Just Got Dehydrated
Next Up: Editor's Pick