Hillary Clinton Says She Regrets Part of Her 'Deplorables' Comment

Hillary Clinton said Saturday that she regrets commenting that “half” of Donald Trump’s supporters are in a “basket of deplorables” but said she “won’t stop calling out bigotry and racist rhetoric” in the presidential campaign.

Clinton’s comments—made Friday at an LGBT for Hillary fundraiser—were swiftly condemned by Republicans, who faulted Clinton for insulting millions of Trump supporters.

“Last night I was ‘grossly generalistic,’ and that’s never a good idea. I regret saying ‘half’ — that was wrong,” Clinton said in a statement Saturday afternoon, before doubling down on criticism of Trump’s rhetoric.

“It’s deplorable that Trump has built his campaign largely on prejudice and paranoia and given a national platform to hateful views and voices, including by retweeting fringe bigots with a few dozen followers and spreading their message to 11 million people,” she added.

Both Trump and vice presidential nominee Mike Pence lambasted Clinton’s remarks, which Pence said should be “denounced in the strongest possible terms” while speaking at the Values Voter Summit in Washington, D.C. “Wow, Hillary Clinton was SO INSULTING to my supporters, millions of amazing, hard working people,” Trump wrote on Twitter.

Clinton has sought to draw attention in recent weeks to Trump’s support from the so-called ‘alt-right’ movement. In defending her on Saturday, Clinton’s running mate, Tim Kaine, said the “deplorables” comment was about that.

“She said, “Look, I’m generalizing here, but a lot of his support is coming from this odd place, that he’s given a platform to the alt-right and white nationalists,’” Kaine said in an interview with the Washington Post .

Clinton also repeated her comment that many of Trump’s supporters deserve empathy.

“I also meant what I said last night about empathy, and the very real challenges we face as a country where so many people have been left out and left behind,” she said in her statement. “As I said, many of Trump’s supporters are hard-working Americans who just don’t feel like the economy or our political system are working for them.” 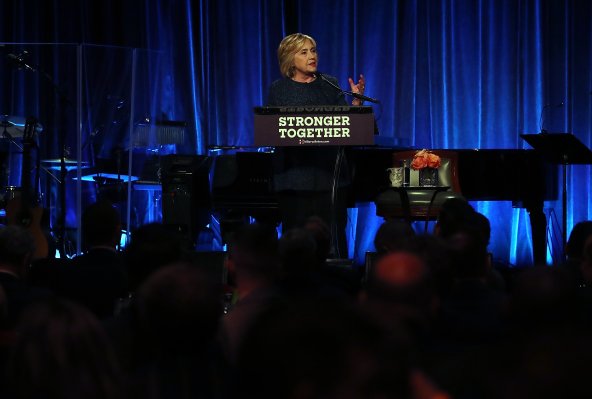