9/11 First Responder: How My Service Dog Helps Me Heal

Jaime Hazan, a contributor to TIME, is a former EMT who volunteered at Ground Zero on Sept. 12, 2001

Fifteen years after the 9/11 terrorist attacks, the post-traumatic stress that I—and many others—continue to experience can feel like a roller coaster ride I can’t escape. I’m constantly facing the unknown darkness of the disease, its invisible curves, and the ups and downs of emotions. There is much the medical community can and should do to help 9/11 survivors and first responders like me heal, but I’ve found that one idea gets too little attention and could have a big effect.

Meet my partner, Bernie. Like Bernie Sanders, his hair is white and messy, but he has nothing to do with a Democratic Socialist taxpayer-funded health-care system. Instead, he represents a radical idea in mental health care. My partner is a 1-year-old, larger-than-life Golden Doodle, believed to be the first service dog donated to a first responder in the U.S.

Do three walks a day keep the psychiatrist away? OK, not quite. Bernie’s job is to serve as an enhancer to the traditional therapies by performing specific tasks that get me through the day, and sometimes the night. He wakes me from disturbing dreams, he helps pull carts and pick up fallen items when my asthma kicks into full gear, and he stands in between me and a stranger to give me distance and help me avoid crippling anxiety. He makes living alone and single in Jersey City easier.

Pharmacy visits can be a daily task. As I enter Target and approach the pharmacy, I tap the counter and tell Bernie: “Say hi to Patti.” Pharmacist Patti Kenny and the other pharmacists are then happily greeted by my K-9 partner and his gigantic paws, which are still larger than his body, and the pharmacists smile as they enjoy their momentary break. These pharmacy visits are a true crossroads—the dispensing of medicine that is FDA approved alongside my four-paw remedy, both of them working together as a team to help me heal.

Bernie draws attention, sometimes too much when I’m just trying to walk around—seemingly everyone wants to pet him. And he makes everyone smile, especially kids. Bernie, who serves in no official capacity in the armed forces—despite his camouflage doggie vest—has various patches, one of which says “working.” A little girl once blurted out: “Look at that big white dog. It says he’s working.” She then concluded: “That dog’s gotta job, and he works for the Army!”

It was an understandable mistake: service dogs are often used to help veterans. But master trainer Sheila Slezak, Founder of Dogs4Warriors took a chance on me. “Dogs can wake you up from night terrors; meds don’t,” Slezak said. “They make you feel more like someone is always there to listen, they don’t judge you, they love you unconditionally.” After having Bernie for about 100 days, I can affirm: she is spot on.

Before Bernie, I buried the hurt and shame, and dealt with crippling depression and anxiety. Today, I feel myself starting to heal. Bernie is a partner who helps me get through the day.

As of today, the 9/11 Centers of Excellence, which provide medical services to first responders affected by 9/11, do not hold a position on service animals. But after so many years of psychological treatment and feeling constantly challenged by my physical illnesses, and fear of another terrorist attack, I considered the Hippocratic Oath taken by doctors and saw no harm in adding a service dog to the list ways to get help.

Starting on this 15th anniversary of the 9/11 attacks, I plan to start an effort to help finance and offset the costs of getting a service dog for any qualified 9/11 responder through a network of training organizations and individuals. Survivors and other first responders might be able to get out of the darkness and into the light with the help of four paws and genuine determination. We must come together as a community and heal.

I may still be riding a rollercoaster in the dark, but it’s the person who can rebound and cope with the severity of ailments who will recover to live a life of fulfillment. Bernie is helping me do just that. 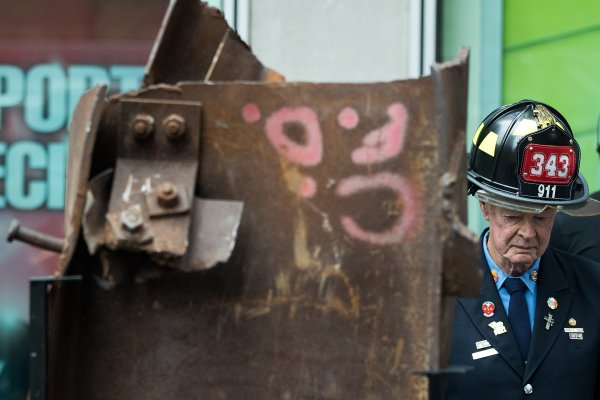 What 9/11 Taught Us About Helping Trauma Survivors
Next Up: Editor's Pick