The editors at the Oxford English Dictionary typically wait and watch for years before giving new words a chance to be included in their hallowed pages. So when those editors decide to add the likes of squee — Internet slang expressing delight or excitement — you know there is nothing willy-nilly (or shilly-shally) about it. That term, like hundreds of others going live on Monday, has been weighed, measured and determined to be a notable event in the history of the English language, silly as it may sound.

Beyond squee (which the editors date back to an online discussion about Ewoks in 1998), many of the most interesting additions speak to the Internet’s influence on English. Take regionalisms like ‘Merica and fuhgeddaboudit.

Those jokey, informal impersonations of people (Southern, New York-ish) or mind-sets (into hot-dog-eating monster trucks, doubtful that Tommy will ever really leave the neighborhood) are the types of words that, for the majority of human history, people mostly would have only spoken to each other. But now, thanks to the likes of social media, we’re now writing them and making decisions about how they’re spelled. And that means people like Oxford editor Katherine Martin have evidence to build a case for putting them in the dictionary looking just like that.

“It’s an evocative way to bring personality into the written word,” says Martin. While arguments about whether it should be ’Merica or ’Murica might lead to fisticuffs in some quarters, a dominant spelling of the even the most outlandish spoken phrases typically rises above the rest, she adds. Similar, older examples are words like helluva, gotcha, gonna and ohmygawd. (More examples, like the rather-NSFW jagoff and biatch are also in this latest batch.)

Also notable is the addition of gender-fluid, a term describing someone who doesn’t necessarily identify as male or female — or who might feel rather female one day and rather male the next. Of all the evolutions going on in the English language, Martin sees the “speed at which the English language is expanding” to accommodate identities like this to be the most thrilling, from her perch as an observer. And that speed is no doubt thanks to the Interwebs, as well.

Here’s a selection of words that are now, and forever, in the OED.

bracketology (n.): the activity of predicting the participating teams in a tournament (typically the NCAA basketball tournament) and the winners of the competition’s stages, as depicted in a diagram representing the sequence of matches.

clicktivism (n.): the practice of signaling support for a political or social cause by means of the Internet, through social media, online petitions, etc., rather than by more substantive involvement.

freemium (n.): a business model, especially on the Internet, whereby basic services are provided free of charge while more advanced features must be paid for.

fuhgeddaboudit (int.): in representations of regional speech (associated especially with New York and New Jersey): “forget about it”; used to indicate that a suggested scenario is unlikely or undesirable.

gender-fluid (adj.): designating a person who does not identify with a single fixed gender.

moobs (n.): unusually prominent breasts on a man, typically as a result of excess pectoral fat.

non-apology (n.): a statement that takes the form of an apology but does not acknowledge responsibility or express regret for what has caused offence or upset; an insincere or unconvincing apology.

swirlie (n.): an act of forcibly immersing a person’s head in the bowl of a toilet as it is flushed, typically as a practical joke.

uptalk (n.): a manner of speaking in which declarative sentences are uttered with rising intonation at the end, a type of intonation more typically associated with questions.

Yoda (n.): a person who embodies the characteristics of Yoda, esp. in being wise; an elder, sage or guru.

YOLO (int.): “You only live once”; used to express the view that one should make the most of the present moment without worrying about the future (often as a rationale for impulsive or reckless behavior). 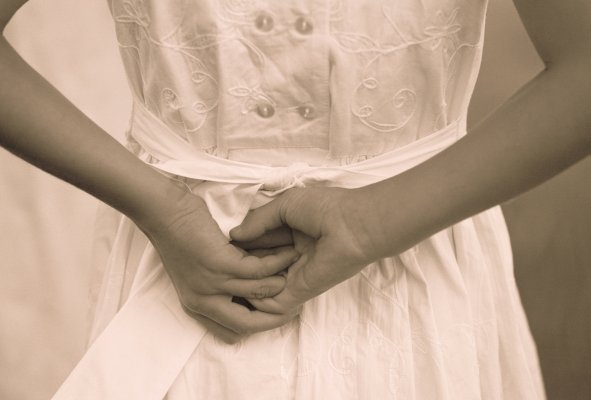 Don't Tell Anxious Kids That Everything Will Be O.K.
Next Up: Editor's Pick