Protests against racial inequality begun by San Francisco 49ers Quarterback Colin Kaepernick are beginning to spread throughout the NFL on the league’s opening weekend.

After Kaepernick sat during the National Anthem during a pre-season game because he didn’t want to “show pride in a flag for a country that oppresses black people and people of color,” his teammate Eric Reid also declined to stand during their final pre-season game. Seattle Seahawks’ cornerback Jeremy Lane followed suit, and then Denver Broncos linebacker Brandon Marshall kneeled in protest during the team’s regular season opener on Thursday.

Read More: Colin Kaepernick and a Brief History of Protest in Sports

Now, the Seattle Seahawks are considering a team-wide show of unity before their season opener on Sunday, the 15th anniversary of the September 11 terrorist attacks.

“Even if it wasn’t September 11, the point of the protest is to get people to think,” Seahawks receiver Doug Baldwin said, Yahoo Sports reports. “It’s very ironic that 15 years ago on September 11 is one of the most devastating in U.S. history and after that day we were probably the most unified that we’ve ever been. And today you struggle to see the unity.” 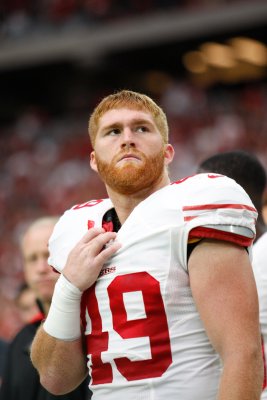