A sign reading in Arabic, "Shooting Range," is seen at a military academy south of Aleppo, Syria, after the former Nusra Front — renamed Jabhat Fateh al-Sham after breaking from al-Qaeda — announced they seized control of two military academies and a third military position, the Syrian Observatory for Human Rights said on Aug. 6, 2016.
Omar Haj Kadour—AFP/Getty Images
By Dominique Rowe

The commander of al-Qaeda’s former Syrian division has been killed by an airstrike in rural Aleppo, according to reports from Reuters.

The militant group, which changed its name in July from the Nusra Front to Jabhat Fateh al-Sham, has been battling the Syrian army and Iranian-funded Shi‘ite militias in the region’s war-torn city, Aleppo.

Abu Hajer al-Homsi, also known as Abu Omar Saraqeb, was a founding member of Jabat Fateh al-Sham, and the top military commander. The group confirmed that he was killed in the area around Aleppo.

A source in the area told Reuters the attack was likely to have come from a U.S. warplane.

Al-Homsi had fought U.S. forces since the American invasion of Iraq in 2003. Reuters quoted an Islamist source as saying that he was at a hideout in the village of Kafr Naha when the strike occurred. 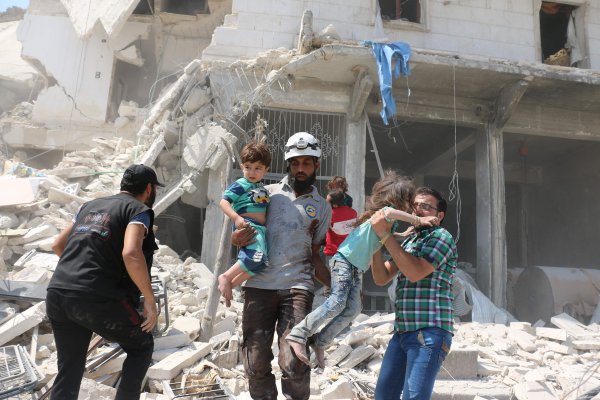 This is What Presidential Candidate Gary Johnson Should Know About Aleppo
Next Up: Editor's Pick