How the 2016 Election Is Testing the Legal Standard on Corruption

In deciding a landmark case on campaign finance six years ago, the Supreme Court drew a bright line between actual corruption and the mere appearance of impropriety.

In its Citizens United decision, the majority of the court argued that “the appearance of influence or access” to a politician “will not cause the electorate to lose faith in this democracy.”

In recent weeks, the two presidential nominees have argued that well-timed donations involving their opponents led to political decisions that amounted to a form of corruption, even though neither has any solid proof. When it comes to each other, Clinton and Trump do not see the Supreme Court’s bright line.

At a rally last Tuesday in Durham, North Carolina, Trump argued that Clinton and her aides “knowingly destroyed evidence” of their “shady activity” at the Clinton Foundation.

“Nobody takes all the risks Hillary Clinton took unless they’re trying to cover up massive, massive crimes,” he said, as members of the crowd chanted “lock her up.”

Clinton, meantime, raised questions about Trump’s donation to Florida attorney general Pam Bondi in 2013, when she was considering looking into complaints about Trump University.

“The American people deserve to know what was said, because clearly the attorney general did not proceed with the investigation,” she told reporters aboard her new campaign plane on Tuesday. Her husband went even further, saying Trump used his charity to “pay off” Bondi.

The dueling charges come at a time when the definition of political corruption has changed.

For decades, U.S. law viewed corruption as not simply about a suitcase of cash furtively exchanged for a vote. It could also be about politicians getting too cozy with their donors: dinner parties, private meetings and taking advice that led to official actions. Lawmakers and judges targeted the appearance of corruption with laws meant to restrict money in politics. The idea was that the appearance, even without clear quid pro quo, could be corrosive, causing people to lose faith in democracy.

The “public awareness of the opportunities for abuse” could be as great a danger as pay-to-play, the Supreme Court stated in Buckley v. Valeo in 1976. Avoiding the “appearance of corruption” became a legal justification for limits on campaign donations, and the Supreme Court ruled again in 2003 in McConnell v. FEC that it was about the “broader threat from politicians too compliant with the wishes of large contributors” and donors getting unfair “access to high-level government officials.”

But the legal standard around appearances has been all but abandoned in recent years, thanks to court rulings. In the Citizens United case in 2010, which led to the creation of super PACs, the Supreme Court accepted in its ruling that “favoritism and influence” accompany political donations. The court reaffirmed that view four years later in McCutcheon v. FEC, saying that “access to elected officials or political parties” does not give rise to “quid pro quo corruption.” The court accepted that politicians rub elbows with their donors and respond to their concerns.

The irony is that what lawmakers long feared would happen—corrosion of confidence in the democratic process—is now coming to pass. Faith in public institutions has plummeted, and Clinton and Trump are among the least trusted presidential nominees in history. It is the first election in recent memory in which both sides have accused the other of illegal behavior.

“The appearance that elected officials are more beholden or give special access to donors is dangerous for democracy, and that’s what we’re seeing now,” said Larry Noble, general counsel at the Campaign Legal Center, which studies and litigates campaign finance issues.

To many, the Trump and Clinton affairs both have the appearance of corruption, even if there is no clear evidence of pay-to-play. Trump made a $25,000-donation through his charity to Florida’s attorney general, Pam Bondi, in 2013, at the moment she was considering whether to investigate his business for alleged fraud. She then called off the investigation, and a year later, Trump held a fundraiser for her at his Mar-a-Lago estate. Clinton, meanwhile, is accused of giving donors to the Clinton Foundation special access and in some cases appearing to act on their behalf as Secretary of State.

The cases are clearly different: Trump gave directly to an elected official who shortly after ruled out joining potentially damaging lawsuit against him. Clinton did not directly receive most of the donations, which instead went to her family’s foundation—where Clinton was never on the payroll. There’s no evidence that Clinton’s donors sought access in connection with a specific event, or that Clinton as Secretary of State actually granted an official act benefiting her donors, as Bondi did for Trump.

Trump, who says he gave money to politicians to help his businesses, has reveled in the access that his dollars bring. “When I need something from them, two years later, three years later, I call them, and they are there for me,” he said at a debate last year, referring to the officials he contributes to. “When I call, they kiss my ass,” he told an audience in Iowa in January.

But unless more evidence is produced showing a quid pro quo, there was no crime committed under the current standard. “Citizens United made it ambiguous whether money for the Lincoln Bedroom or money for an invitation to the governor’s mansion is OK,” said Nancy Gertner, a former federal judge in Massachusetts. “The case of, ‘I give you money and in exchange I get an invitation for dinner,’ that doesn’t count” as corruption under the recent rulings.

Still, the whiff of money-for-access—real or imagined—has surrounded both, and both sides are claiming the other engaged in pay-to-play, appealing to an angry electorate.

“A couple of very bad ones came out, and it’s called pay for play,” Trump said last month, referring to Clinton’s emails. “And some of these were really, really bad and illegal. If it’s true, it’s illegal. You’re paying and you’re getting things.”

Clinton’s campaign has shot back. “There is only one candidate in the race whose foundation has been caught in an illegal pay-to-play scheme,” Clinton spokesperson Glen Caplin said in a statement to the Washington Post this week.

With money slushing around super PACs and voters reading daily stories of candidates cozying up to their donors, distrust of the candidates has risen to new levels. It’s led to the rise of candidates like Vermont Sen. Bernie Sanders, who preached power-to-the-people politics, and Trump, whose supporters’ loathing for Clinton has become legendary.

“She is a criminal. Criminal, and that’s all there is to it,” said Gary Wilson, a cook sitting a bar this week in Wilmington, North Carolina. “She should be put in prison.”

With reporting by Charlotte Alter in Wilmington, N.C. 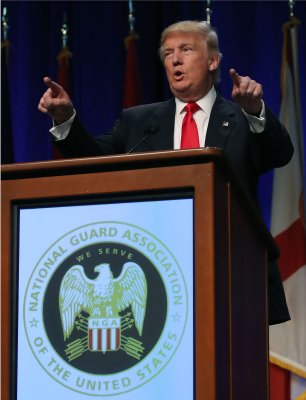 Donald Trump Fires Back at Hillary Clinton's 'Basket of Deplorables' Comment
Next Up: Editor's Pick