What We Learned From the NBC Forum

If you only read one thing: Hillary Clinton and Donald Trump’s first face off on national security issues Wednesday night served as a preview of the contentious 61 days ahead. Neither had a banner night, and both nominees gave ample ammunition to the other side as they reinforced the caricatures being painted of them by their rivals. Clinton grew defensive over questions about past support for the Iraq War, constantly trying to “pre-but” her rival’s later appearance at the town hall. And she struggled again to defend her use of a private email server. Trump spoiled the softball questions lobbed his way with unforced errors including praise for Vladimir Putin, attacking the U.S. military leadership as “rubble” and discussing his classified national security briefings. The evening also highlighted the difficult road ahead for the debate moderators, as NBC anchor Matt Lauer refused to correct Trump’s false assertions that he never supported the Iraq War or the Libya intervention.

Trump is turning to education reform Thursday with a stop in Cleveland where he will call for more school choice as part of his continuing bid to win over minority voters. Clinton held a press conference Thursday morning to pile on Trump’s performance last night, but first called for the U.S. to hunt and capture or kill ISIS leader Abu Bakr al-Baghdadi the same way it went after Osama bin Laden. (Notably, in 2007 she criticized then-Sen. Barack Obama for proposing the U.S. intervene in Pakistan to find the late al Qaeda leader.)

On the final day of his Asia swing, President Obama waded into U.S. politics in some of his strongest terms yet, calling out Trump’s “contradictory or uninformed or outright wacky ideas.” Obama’s criticism came in direct response to Trump’s answers at the town hall.

Win or lose Trump is going to Washington. Mike Pence breaks with Trump and says Obama was born in Hawaii. And “What is Aleppo?”

Trump Bragged That His Money Bought Off Politicians
Just not this time. [Washington Post]

“I’ve already said, he is really very much of a leader. I mean, you can say, oh, isn’t that a terrible thing — the man has very strong control over a country.” — Donald Trump praising Vladimir Putin in the Commander in Chief town hall Wednesday

“So I did exactly what I should have done.” — Hillary Clinton on classification and her private email server. (Coming to a GOP ad near you!)

Mike Pence Says Obama Was Born in Hawaii: ‘I Accept His Birthplace’ [TIME]

Presidential Candidate Gary Johnson Asks ‘And What is Aleppo?’ [TIME] 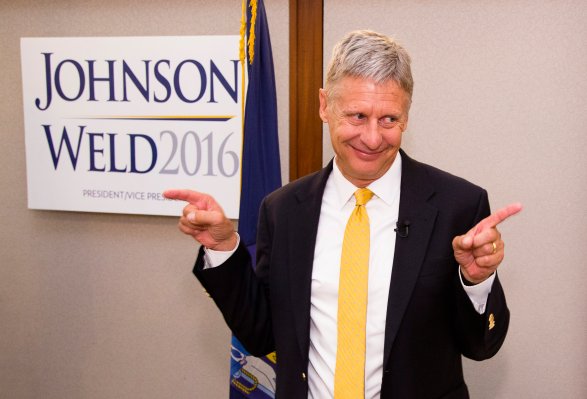 Read the Interview Where Gary Johnson Asked What Aleppo Is
Next Up: Editor's Pick