Americans refer to the National Mall as a “stage for democracy.” It is a place where citizens can contest the ever-changing meaning of the nation, where protests challenge us to rethink what constitutes citizenship, justice and democracy. It is where presidents are inaugurated and where the country has commemorated leaders like Lincoln and Jefferson and King and events with lessons that endure. It is where American society expresses its national ideals of democracy, liberty and freedom. As such, the Mall and public spaces like it are more than just a passive landscape. They are an active agent in the telling of our national story. Recent efforts to fortify and secure the Mall, then, reveal a troubling story of building barriers in a place that symbolizes freedom.

There are now numerous emerging challenges and opportunities reshaping and redefining public space in cities around the world. The Mall in particular has been impacted by the wider trend of disinvestment in the public realm, the neglect of infrastructure and a backlog of maintenance. The lack of thoughtful public debate about planning our public spaces in the twenty-first century plays a role, too. Much of this is the result of how we reacted to September 11, 2001.

Since 9/11, concerns about the security of public spaces in the U.S. have preempted those about access. They have penetrated into the practices of governance, design and planning. They have impacted the look and feel of our cities. In a new hyper-vigilant, hyper-secure post-9/11 world, we have spent millions of dollars trying to provide the appearance of universal protection of all the buildings and all of the people in them—even though this is impossible.

This was a trend in Washington, D.C. before the fall of the Twin Towers. But after 9/11, the “war on terror” meant there was an urgent imperative to fortress “at-risk” public spaces like the Mall. Some of the security measures made since are visible (barricades); some, less visible (security cameras); and some, temporary (the double-line fences that surround the Mall for the Fourth of July celebration). The fortification of our Independence Day has become so normalized that each year the Washington Post publishes a map showing visitors the security checkpoints and public access areas without a hint of irony.

The security on the Fourth of July has never been seriously challenged or overtly resisted. Nor was there much debate about the $20 million spent to construct sunken walkways that now encircle the Washington Monument. The walkways effectively stop trucks or cars carrying explosives from reaching the Monument. They do little to protect against bombs carried in backpacks or by bicycles or the impact from an airplane.

The walkways also change the way we approach and experience the Monument. Its grounds have historically served as the epicenter of public demonstrations, where protests often culminate in marches that encircle the Monument and expand outward, filling the grounds in an unbroken chain. While the walkways don’t prevent these types of gatherings, they do alter them. They make it difficult for those with strollers, bicycles or walking disabilities to access the lawn seating area around the monument (the other option is to scale the four-foot wall—not an easy task).

Enhanced security has also meant the end of candlelight tours of the White House, and closing of the West Steps of the Capitol, which once provided the best panoramic view of the Mall. Even presidential inaugurations take place amidst bollards, barriers, sentry boxes and thousands of soldiers and police officers, as well as miles of security fences. A few years ago, the unsightly hodge-podge of jersey barriers, planters, snow fencing and flimsy barricades at the Jefferson Memorial were so confusing that the Park Service installed a sign to clarify that the Memorial was, in fact, open to visitors—underscoring how intimidating it has become.

Fortification now dominates public spaces, at the expense of the protection of public access and their symbolic meaning. A century of protests and demonstrations on the Mall changed democratic values and practices for citizenship and equality (such as women’s suffrage and the 1963 March on Washington) and challenged political policy (like labor strikes, pro-immigration protests and anti-war demonstrations.). The Mall has fostered social resistance and challenges to democratic values, as well as critical debates that underlie the health of a civil society. Security measures may impede this role. We lose civil liberties when the public has only restricted or monitored access to public spaces. Video monitoring discourages demonstrators, especially those who protest government policy or support an unpopular cause. These places should encourage citizens to move about freely.

Questions about security on the Mall—and in public spaces across America—might not seem as pressing during the war on terrorism. But in the long-term, they will determine how we find the balance between needs for security and national conversation. As they stand, public spaces embody an architecture of fear and vulnerability. Since September 11, 2001, security officials seem to have not only the last word but the only word. 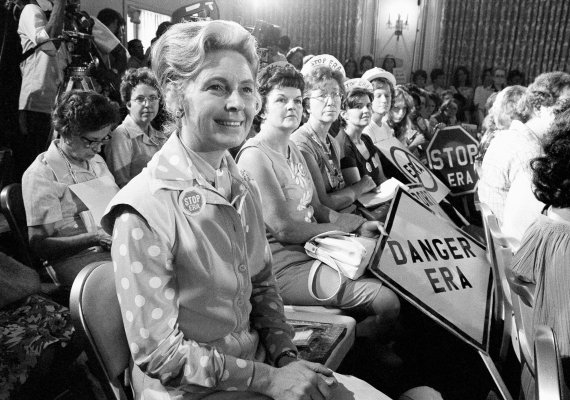 The Surprising Secret to Phyllis Schlafly’s Success
Next Up: Editor's Pick