A Young Syrian Refugee Dreams of Going to School

Zahra Mahmoud, a Syrian refugee, at an informal settlement on the outskirts of Mafraq, Jordan, on March 11, 2016.
Muhammed Muheisen—AP
By Andrew Katz

Several of her older siblings attended school back in Syria, from where her family fled last year, but she was too young and now, there is no opportunity to do so at the informal settlement in Jordan, where the five-year-old, her parents and seven brothers and sisters live in a tent.

She’s far from alone. A sobering new Unicef report, released at the time of year when millions of children around the world begin kindergarten or elementary school, states that nearly 50 million children are uprooted—more than half of them due to conflict. They’re five times more likely to be out of school than a non-refugee child, and even when they can be in school, they’re likely to encounter discrimination.

Associated Press photographer Muhammed Muheisen met Zahra and her family last year while documenting the crisis for Syrians in Jordan. Her family’s home in Deir ez-Zor was destroyed in a bombing years earlier and so the family fled north to Hasaka, where Zahra was born, her father, Hassan Mahmoud, told him. The family crossed the border into Jordan in April 2015 and within two months they were in the settlement. Muheisen took her portrait that August and returned the next March to see the family again. In recent phone interviews with Zahra and her parents, Muheisen heard about the girl’s day-to-day reality.

Mahmoud, 42, used to be a taxi driver and own a farm: “I used to have a good life.” He opted to keep the family outside a registered camp in Mafraq “so we can work and be more independent and breathe.” He wakes up before dawn, works at a nearby farm until 6 p.m. and then is back for dinner about an hour later “where we talk about life, Syria, hardly about the future.” By dusk he’s beyond exhausted.

“I come back home so tired from my day so there is not much to give them or teach them beside feeding them and clothing them,” he adds. “My biggest priority right now as winter is approaching is keeping them warm from the cold nights.”

Zahra Mahmoud, four, sits in front of her family's makeshift home at an informal tented settlement near the Syrian border on the outskirts of Mafraq, Jordan, on Aug. 19, 2015.
Muhammed Muheisen—AP

Zahra told Muheisen she doesn’t remember much from Syria. “I wake up and eat breakfast, I play with Hamoodi and Abbas (my younger brothers) and I stay in my tent. I also play around the tent.”

“In this informal camp there is nothing for my children to do,” Mahmoud says. “No schools, no playground, literally nothing—it’s full of dirt and dust.”

Her mother, Samira Mohya, told Muheisen the girl is quiet, “trapped” and traumatized. “I can’t teach her much as I don’t have the skills or resources to do that,” she laments.

Mahmoud remembers the happy days in Syria when he used to buy bags and clothes for his children and walk them to school. He wishes for her to learn to read and write, and he hopes to one day return so Zahra can achieve her dream: to become a doctor.

Muhammed Muheisen is the Associated Press’ chief photographer for the Middle East, Afghanistan and Pakistan. He was TIME’s 2013 Wire Photographer of of the Year. Follow him on Instagram @mmuheisen. 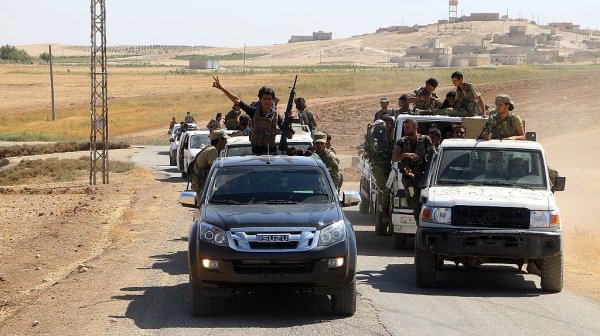 Hope for Syrian Rebels as Peace Talks Intensify
Next Up: Editor's Pick