A Texas man who is accused of gunning down a middle school student and wounding her best friend last week told police he was motivated by jealousy and claimed he planned the attack with the devil.

Kody Lott, 20, confessed to shooting the two friends as they walked home from school together on Friday, admitting he was attracted to the girl he killed but was angry that she had a boyfriend, according to an arrest affidavit obtained by the Times Record News. He also said he “planned and thought it out after talking to the devil about it,” the affidavit says.

Lauren Landavazo, 13, died after being shot more than a dozen times, while her 13-year-old best friend Makayla Smith survived, authorities said. Makayla told investigators she and Lauren were walking home in an alley near school when she spotted a man she didn’t know in a parked car, according to the affidavit. She said the man made eye contact with her before whipping out a rifle and opening fire on them.

Authorities found 15 shell casings at the scene of the crime, the affidavit says. Police believe Lauren was shot 14 times, and Makayla once.

Lauren had been dating her boyfriend since at least last November, according to her Facebook page. Her family called him her “love” in an obituary.

Lott, who was arrested Sunday, faces charges of murder and aggravated assault and is being held in jail in lieu of $4 million bail, the Times Record News reports. Police had pulled him over after seeing that the vehicle he was driving matched a description of the shooter’s car.

Meanwhile, hundreds of people have donated more than $16,000 to an online fundraising page set up to help pay for Lauren’s funeral, which is set for Thursday.

“Lauren touched the lives of so many people who [could] not help but feel the love and joy for life she had when they were around her,” her family wrote in an obituary. “Her compassion and love for other people made her the most beautiful person inside and out. It was hard to stay sad around Lauren, she simply wouldn’t allow it. She was the lovely, lively heart and soul of our family.” 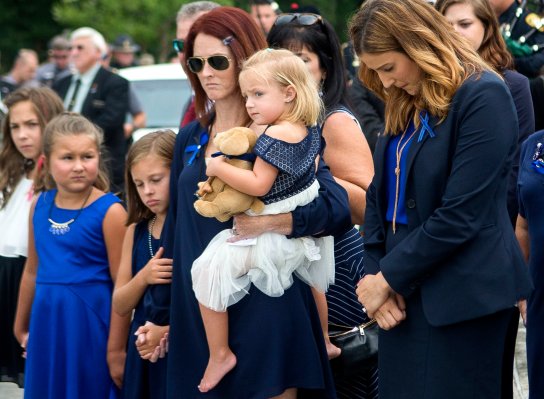 Wife of Slain Baton Rouge Police Officer Is Pregnant With His Child: ‘He Left Us a Very Special Gift’
Next Up: Editor's Pick