Donald Trump Proposes Larger Military With Less to Do

Donald Trump proposed a major expansion in the number of ships, planes and service members in the U.S. military Wednesday, while at the same time suggesting that he would deploy those forces less frequently than his predecessors.

Branding his Democratic rival Hillary Clinton as “trigger-happy and very unstable,” Trump blamed much of the current global instability—and the loss of hundreds of thousands of lives—on the former Secretary of State. “Everywhere she got involved, things got worse,” he said of her time in office. “Unlike my opponent, my foreign policy will emphasize diplomacy, not destruction,” he added.

His harsh rhetoric for Clinton completed Trump’s foreign policy two-step, in which he advocated following the mantra of “peace through strength.” Trump said he’d embrace a policy of “realism,” particularly in the Middle East, breaking with past efforts to nation build or foment democracy. He also reiterated his calls for U.S. allies, including Japan, Germany, and Saudi Arabia to increase their payments to the U.S. government for the security they experience from the basing of U.S. troops in their countries.

The speech highlighted the inherent tension in Trump’s foreign policy vision, as he both seeks to shrink the U.S. footprint abroad and undertake a vast expansion of its defense programs. Delivered with the aid of a teleprompter, it also sought to paper over some of the candidate’s more hawkish rhetoric of the campaign cycle and his own past statements of support for interventions in Iraq and Syria.

Citing figures prepared by the Heritage Foundation, a conservative think tank, Trump called for a Navy with 350 ships and submarines, a Marine Corps with 36 battalions, and an Air Force with more fighter aircraft. He also called for a restoration of a 540,000-strong active duty U.S. Army, reversing cuts overseen by the Obama administration.

Warning of global threats from terrorists and state actors alike, Trump advocated for a “state of the art missile defense system” and called for adding anti-ballistic missile technology to the Navy’s aging Ticonderoga-class cruisers. He also said he would seek a vast expansion of the military’s offensive and defensive cyber capabilities.

The speech was given in an opulent ballroom at a private club for Philadelphia’s high society, an unusual location for a foreign policy address. He was introduced by retired Lt. Gen. Mike Flynn, one of his top foreign policy advisors, who sought to defend Trump from attacks by Clinton questioning the GOP nominee’s temperament. Her campaign released an ad Tuesday featuring military families and veterans reacting to his foreign policy pronouncements.

“If I was going to tag him with a strength, it would be his temperament,” Flynn said. “His temperament is about winning.”

Trump also said he’d ask Congress to reverse the mandatory defense spending cuts that are in effect through 2021 known as sequestration, adding he would call on Congress to offset the costs through finding efficiencies in government and ending “unauthorized payments” by the federal treasury. But Trump was silent on how he’d pay for the massive upgrade and expansion of the military beyond those relatively minor offsets. 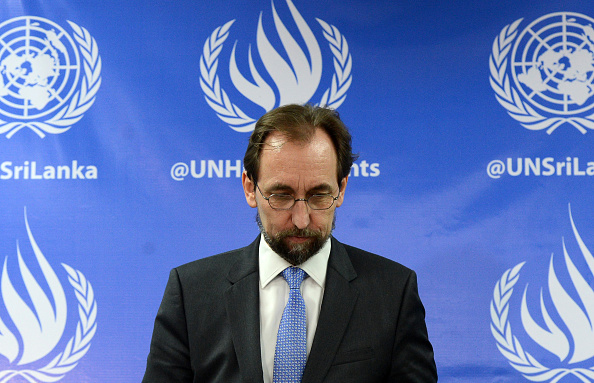