Wife of Slain Baton Rouge Police Officer Is Pregnant With His Child: ‘He Left Us a Very Special Gift’

Dechia Gerald during the funeral for her husband, Matthew Gerald, in Baton Rouge, LA, on July 22, 2016.
Bill Feig—AP
By Melissa Chan

The wife of a Baton Rouge police officer who was assassinated in July during an attack on law enforcement is pregnant with her slain husband’s child.

Dechia Gerald, 38, said she was overwhelmed with different emotions when she found out she was pregnant about two weeks after her she lost her husband, Baton Rouge police officer Matthew Gerald, in a deadly ambush.

“I wanted to cry but at the same time, it’s kind of exciting,” she told WAFB. “But then the flood of knowing all of the firsts that he would miss with that one.”

Matthew Gerald, 41, was among three officers who were targeted and killed by Gavin Long, a 29-year-old former Marine from Missouri. Gerald, a former military man, left behind his wife, two young daughters—9-year-old Dawclyn and 3-year-old Fynleigh—and now a baby who is due in April.

“For the most part, it’s a blessing. I mean obviously he left us a very special gift behind, but at the same time, all those days that I get overwhelmed, I ask how am I going to do this by myself without him,” Dechia Gerald told WAFB.

The couple had just celebrated their fourth wedding anniversary before the fatal shooting. The widow told TIME in July that her husband would always find time for his kids despite being exhausted from working overtime. 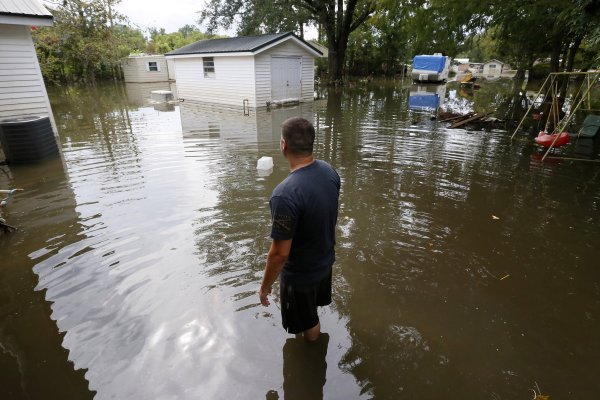