Rand Paul during a candidates forum at the Kentucky Farm Bureau headquarters, in Louisville, KY, on Aug. 25, 2016.
Timothy D. Easley—AP
Ideas
By Sen. Rand Paul
Paul is the junior U.S. Senator for Kentucky

“It really is a financial hardship to afford it.”

So says a pharmacist in my hometown of Bowling Green, Ky., about the EpiPen, which can be a lifesaver for those suffering an anaphylactic allergic reaction.

I’ve seen up close and personal the life-saving effects of epinephrine: first, as a scared 5-year-old kid struggling to breathe after a bee sting and later as a physician treating airways constricted from severe allergic reactions.

For many parents, it’s quick treatment in scary situations where every second matters. For those afflicted with severe allergic reactions, it’s portable peace of mind.

Yet this relief has turned into another burden, with a pack of just two EpiPens skyrocketing to more than $600 in the United States.

To fully comprehend the outrage of this price, you must realize that the epinephrine included in the EpiPen costs less than $10 retail.

Some are pointing toward this as an example of corporate greed or the excesses of capitalism, but they’re missing the larger picture. This is an almost perfect example of crony capitalism and a government-dominated system that is failing consumers.

There isn’t a whole lot of capitalism in health care anymore. In fact, that’s one of the major problems we have to fix. There are very few market forces and competition, and most of us are shielded from caring what something costs.

But we don’t always see why this is so. Obamacare promised to make this better, but it has made it worse, with a long list of mandates and subsidies that further drive out any market force.

But government blame doesn’t end there. The regulators at the Food and Drug Administration have made a giant mess of the process to get a new drug or device approved, and they act as a huge roadblock to cheaper, generic drugs and competition that could drive prices on life-saving drugs like epinephrine down.

To discover how EpiPens—the brand-name injector for epinephrine—became a government-created monopoly, follow the money and the bureaucrats.

The EpiPen monopoly and the outrageous increase in price are not a breakdown of capitalism but a consequence of the FDA preventing competition.

The FDA has systematically slowed down approval of EpiPen competitors and smothered generic competition in unrealistic red tape.

Meridian Medical Technologies, a subsidiary of Pfizer that manufactures EpiPen for Mylan, holds a patent on its auto-injector design through 2025, but some of the FDA’s authorities can significantly compound a rival company’s obstacles once another company possesses a patent. These regulations have all but ensured a virtual Mylan monopoly.

If a patent holder or brand-name drug manufacturer sues a generic drugmaker for patent infringement within 45 days of receiving notice of their generic drug application, the FDA grants the brand manufacturer a 30-month stay of approval against the generic, which can be lengthened or shortened by a court depending on the merits of the case.

Due to EpiPen being regulated by the FDA as a combination drug and (patented) device product, competitors have often been left scratching their heads as to what to even present to the FDA, thanks to a lack of concrete agency guidance. FDA regulation demands a generic drug with a device component meet a “sameness” standard that is unclear on what, if any, design differences can exist, as well as what data is needed to prove its “sameness.”

Get too close to market entry, and you’ll be sued for patent infringement, placing you in a possible 30-month-long limbo. Don’t get close enough, and you’ll face an application rejection, sending you back to the drawing board for what could be years and leaving you hoping, but unsure, that your product is tweaked enough to pass. This is on top of the FDA’s continuing backlog of generic approvals that further slows down the overall process.

Teva Pharmaceutical, which settled with Mylan in a patent case in 2012, found its generic alternative rejected by the FDA in February, possibly because Teva’s version has two caps, as opposed to EpiPen’s single cap. Adrenaclick is currently EpiPen’s main—and much cheaper—competition, but the product is not always covered by insurance and was prescribed fewer than 1,000 times in the United States last year.

The Drug Price Competition and Patent Term Restoration Act, passed in 1984, further complicates this situation due to its mandate for a 180-day exclusivity period for the first generic to enter the market.

Mylan has recently announced it will introduce a generic EpiPen at half the cost, which will be on the market in just a few weeks. At first blush, you might think this is a mea culpa for its previous price gouging—until you realize the government-protected silver lining for Mylan. By offering a generic version, Mylan will then receive a six-month shield from any generic competitors.

As outrage continues to grow over Mylan’s actions, several solutions and alternatives have been discussed, including a considerably more affordable option where families obtain syringes that a doctor pre-fills with epinephrine.

Looking at what role government can play, we must resist calls to increase its control. After all, if government policies are helping fuel rising prices, why should we pursue more of the same? We can reform the system, lower costs and increase competition by getting bureaucracy out of our innovators’ way.

As an ophthalmologist, I witnessed firsthand how greater competition and freedom can affect the medical industry with the rise of LASIK surgery. Prices continued to drop as patients compared their options—all while the technology kept improving.

One of the first steps we can take to support competition is to remove the ability of brand-name drug manufacturers to use legal loopholes and friendly regulators to protect their own generics, helping prevent a single company from cornering the market.

We must also address the giant roadblock that is the FDA. Instead of investigating private companies that simply take advantage of government rules, we should investigate the real culprit: the FDA. As Congress reconvenes this week, I plan to hold hearings to investigate the FDA’s interference with competition.

Congress must and can act to clean up the FDA’s rules so companies know exactly how the FDA will evaluate their product and what to expect of the review process. One such plan, the Combination Product Regulatory Fairness Act, is advancing in the Senate. This bill would allow for a clear regulatory process for combination products at the FDA, and it would allow a manufacturer to dispute the regulation of their product as a drug or device.

Another option that could have a more immediate effect is to expedite patient access to treatments already approved in other countries. In Europe, EpiPen faces multiple competitors. Giving Americans the opportunity to choose these options would go a long way toward restoring sanity to treatment prices. I plan to introduce legislation to immediately legalize EpiPen competitors that are available in Europe.

In 2012, I successfully attached language to the Food and Drug Administration Safety and Innovation Act requiring the FDA to accept foreign clinical trial data in order to reduce the amount of time it takes to get life-saving medicine on the market. We can build on this progress by also requiring the FDA to expedite review or grant reciprocal approval of drugs already cleared by other developed nations, which will help level the playing field among brand-name competitors.

As of this writing, I am exploring multiple other legislative options to keep the FDA from unfairly advantaging well-established companies, including how best to streamline the FDA’s generic-drug approval process and reduce its massive backlog.

I will urge more of my colleagues to join this cause as Congress returns to session. We must act now, or the heartbreaking reports we’re hearing will pale in comparison to what awaits us. Concerns have already spread beyond EpiPen to other drugs such as naloxone, which is used to treat opioid addiction and overdoses.

Like EpiPens, naloxone auto-injectors have considerably risen in price in recent years, going from a few hundred to a few thousand dollars. As the opioid epidemic continues to sweep our country, this is simply unacceptable. A generic naloxone auto-injector faces the same legal hurdles as EpiPens, and lives will be lost as manufacturers navigate the FDA’s confusing processes.

These soaring prices are not a reflection of capitalism but rather represent government’s interference in the marketplace.

While we can debate all the factors that led us to this point, there’s no debate that far too many Americans are struggling with the weight of where to cut expenses just to afford vital treatment. A broken system has further collapsed, and the rubble has once again landed on those who are trying to make the best life for their families.

It’s within Congress’ power to tackle the rising cost of medication in a way that honors our open market principles and returns multiple options to patients, and it’s time we do so. 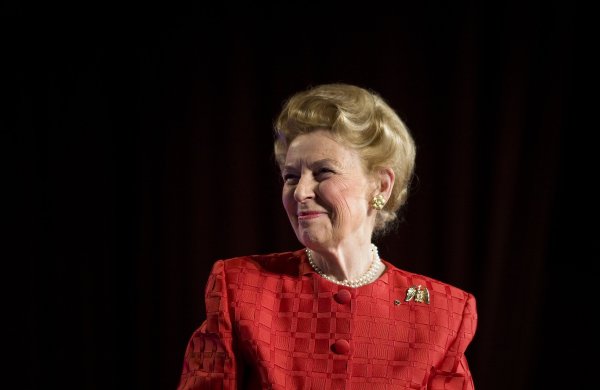 Phyllis Schlafly Loved the Same American Myths that Donald Trump Does Today
Next Up: Editor's Pick