How Climate Change Helped Cause Massive Floods in Louisiana

Climate change significantly increased the chance of last month’s historic flooding in Louisiana, part of a pattern of intense rain event that have grown increasingly common since human influence began shaping the climate more than a century ago, according to a rapid analysis of the weather event.

Scientists from the National Oceanic and Atmospheric Administration (NOAA) and the World Weather Attribution (WWA) group modeled the likelihood of Louisiana’s record rainfall and evaluated how those odds have changed over the past century, as humans themselves have altered the climate. Climate change increased the likelihood of the event by at least 40% and might have even doubled the chances of it occurring, according to the study.

Climate change increases the intensity of precipitation because warm weather leads more water to evaporate forming wetter clouds. South Louisiana received nearly 30 inches of rain between August 10 and 17. 13 people died in the floods, which inundated Baton Rouge and destroyed 60,000 homes. The storm began with the development of a low-pressure system in the Gulf of Mexico, and unusual warmth in the region helped cause more water to evaporate, further feeding the storm clouds.

NOAA and WMA described the storm as a 1-in-550 year event in that particular spot given the current climate. That means that a storm of that magnitude should only be expected to occur once every 550 years in that particular part of Louisiana. The storm should be considered a 1-in-30 year even across the entire Gulf Coast, researchers said. But without drastic efforts to slow global warming, such storms are expected to become even more common in the future.

Imagine weather as the result of a toss of the dice, and for an extreme rainfall event to happen, you need to throw a 12. That’s unlikely—you have a 3% chance of throwing 12 on any given toss of the dice, just as a storm that brings more than 30 inches of rain is extremely unusual. What climate change is doing is loading the dice, as many scientists have pointed out, which makes that roll of a 12—or the extreme weather event—that much more likely.

Attributing any one event to climate change has always been difficult, but scientists have developed methods to quickly assess the links between climate change and extreme weather events in recent year. A National Academies of Sciences report from earlier this year determined that climate science has advanced far enough that researchers can now accurately determine how global warming affects extreme temperature events, as well as drought and extreme rainfall.

The WWA, a partnership between global warming non-profit Climate Central and other research institutions, conducts quick analysis in the aftermath of weather events. 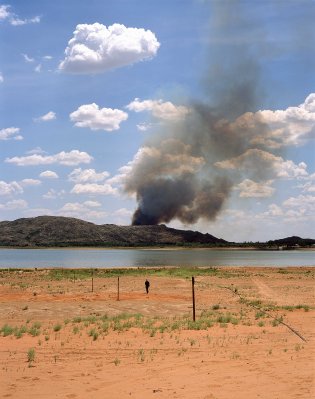 One Photographer Portrays Climate Change Differently
Next Up: Editor's Pick