Here's What Pro Photographers Love About the New iPhone 7

There’s a lot that’s new in the iPhone 7 and 7 Plus that Apple unveiled today – from increased battery life to a new Jet Black color version – but the Cupertino-based company paid particular attention to the phones’ camera systems, re-engineering them from scratch.

The iPhone 7 boast a new, wide-angle 28mm, 12-megapixel camera with optical image stabilization — a feature previously reserved for the Plus model — a larger f/1.8 aperture and a new six-element lens that will record “brighter, more detailed photos and videos,” claims Apple. But it’s really with the iPhone 7 Plus that Apple is targeting amateur and professional photographers alike, embedding a second 12-megapixel camera with a focal length of 56mm. It offers a 2x optical zoom, a first for the iPhone.

“My first recommendation for previous versions of iPhone was to never use the zoom,” says photographer Brooks Kraft. “The dual lens now changes this as it is an optical zoom, which could be a big plus for many people using the iPhone as a primary camera.”

But Kraft wonders whether the zoom will affect a photographer’s control over other camera features. “One question will be how the zoom impacts aperture and image stabilization, especially in low light,” he says. In the meantime, though, Kraft is looking forward to the camera’s faster lens and increased noise reduction capabilities. “One of the primary benefits of shooting with an iPhone is it allows you to be inconspicuous . . . mobile photography is so ubiquitous that most people don’t notice,” he says. “The faster lens and better resolution will create new options for working in low light situations indoors and at night or dusk.”

Corey Arnold, an Alaska-based photographer and fisherman, agrees. “I’m a guy that primarily shoots using available light whether in a dark canyon at dusk, or on the back deck of a fishing boat at night,” he tells TIME. “Many great opportunities to make natural light photos have been lost to cameras and lenses not fast enough to handle the dark.” But, the iPhone 7’s new f/1.8 lens looks promising, he says.

Among the phone’s other features, Benjamin Lowy, an editorial photographer based in New Jersey, is particularly interested in what Apple claims is slightly improved battery life compared to previous models. “This is going to be important,” he says.

For Arnold, there’s another non-camera feature that he’s particularly excited about: the phone’s water resistance, also a first in the iPhone. “My two jobs, one being a photographer and the other a commercial fisherman in Alaska, both require perpetual travel to remote regions of Earth where horrible weather is a consistent theme to my work,” he says. “Having an expensive phone camera that will not electrocute itself with one splash of a wave or a little rain is huge for me. While I use a Lifeproof case to keep my iPhone 6S dry, that one extra layer of clear plastic over my lens poorly affects the image quality. Now I feel like I can snap case-less, fearlessly in a storm without the demise of my only way to call for help.”

Apple also announced the upcoming release of a software update that will allow iPhone 7 Plus users to alter a photograph’s bokeh effect, adding a background blur that makes portraits pop. “I am intrigued by this application,” says Kraft. “On the surface it sounds like it may be hard to do realistically with software, as opposed to optically. I will be curious to test it and see. One characteristic of iPhone images to take is they have almost infinite depth of field, so they are obviously trying to create options.”

While all three photographers are looking forward to testing the new device, they say there are still features that are missing from the iPhone line. Arnold, for example, would like the option to create long exposure shots at night with “an integrated feature with built-in timer,” he says. “[But] I would feel like a spoiled brat if I complained too much about this new little phone camera, super-computer in my pocket as technology light years ahead of how I ever could have imagined back in my art school days, huffing darkroom chemicals for four hours and receiving texts on my pager.” 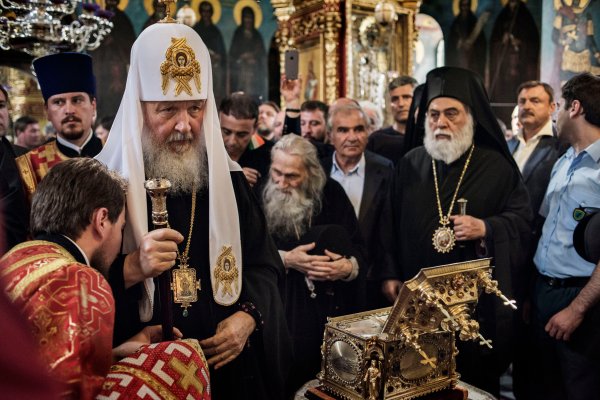 Inside Vladimir Putin's Pilgrimage to the Holy Mountain
Next Up: Editor's Pick