Clothing Regulations Are Just an Excuse to Control Women

In my country of India, the Tourism Minister Mahesh Sharma recently asked foreign women to self-regulate their behavior when visiting “for their own safety.” New welcome kits given to all foreign arrivals, he said, now include safety advice for women such as advising them to not wear skirts or dresses.

Advice like this, which implies that sexual harassment and assault is caused by (and can be stopped by) clothing choices, is commonplace in India. From a very early age, girls are told to watch what they wear because they could draw unwanted attention to themselves. As a result, when they are in public spaces, women and girls are often very conscious about their clothing, often wondering is it too fitting, too loose, too long, too tight, neckline too deep, fabric too revealing, etc.

This focus on clothing is engrained in women’s minds. My organization Safecity, an online community that maps and records people’s experiences with harassment and assault, recently held a workshop in Mumbai on sexual violence. A young girl in attendance told her story of abuse and noted, “And I was not even wearing a short or revealing dress.”

We hear this sentiment often. Because women and girls have been told that clothing is the problem, they are often surprised, baffled and confused when they still face harassment while wearing modest outfits. And most women have faced such harassment. This year, ActionAid UK found that 79% of women in India have experienced some form of harassment or violence just while navigating public spaces.

Around the time of the Minster’s statement, we saw another kind of policing of women’s clothing in France. Under the guise of protecting secularism, 30 towns banned from its beaches the burkini, a full-length swimsuit that covers the entire body except for the face, hands and feet. This turned into a full-blown international crisis when police officers surrounded a woman dressed in a burkini on a beach in Nice, told her to take it off, and gave her a ticket for not “wearing an outfit respecting good morals and secularism.”

The highest court in France overruled the ban last week, yet the debate continues, with one side arguing that the burkini is a garment of Islamic values which prevents assimilation into the French culture and the other side seeing it as a garment that allows Muslim women to participate in Western culture without compromising their religion.

“The burkini swimsuit is freedom and happiness and lifestyle changes—you can’t take that away from a Muslim, or any other woman, that chooses to wear it,” Aheda Zanetti, the creator of the burkini told Politico. In Australia and China, this garment is very popular on the beach to protect sensitive skin from the sun.

This kind of “policing” of what women should or should not wear is not limited to skirts and burkinis, but sometimes also applies to hairstyles. In Pretoria, South Africa, the guidelines on hairstyles at a prestigious girls’ high school resulted in school leaders disciplining black girls for their Afros. Girls there and at other high schools in the country protested and garnered international attention to their plight.

Clothing regulations are just an excuse to control women and divert attention from putting the responsibility on men for their actions. Across continents, religions, and cultures, the patriarchal values the world over create the context and justification for the policing of women’s bodies. They also create the context for a pandemic of sexual violence against women and girls where the mostly male perpetrators rarely face any consequences.

Instead of focusing on women’s and girls’ clothing, we need major efforts to educate men and boys about what is appropriate and respectful behavior on their part and the legal consequences of their actions.

In our Safecity workshops, we conduct awareness programs with men on sexual violence in India. Many of them say they had no clue what constituted the definition of sexual violence. It’s almost understandable given how common it is for people to focus solely on women’s and girls’ clothing and behavior. Having this knowledge, they said they would not act inappropriately and felt more able to call out such behavior by their friends and colleagues if they were witness to it. Several of them said they would go home and talk to their wives, daughters and sisters about it and listen to their stories. We need these kinds of conversations with boys and men everywhere.

We also need our politicians, religious leaders and others in power to use their words judiciously, and to pass policies that actually protect women from sexual assault, rather than perpetuate harmful socio-cultural practices that police women’s bodies and clothing choices.

To end violence, we must stop focusing on the clothing of women and girls and instead have men examine their own potential for violence—and take a stand against all violence.

ElsaMarie D’Silva is the managing director and co-founder of Safecity, a website where people can report sexual harassment in public spaces. She is a 2015 Aspen Institute New Voices Fellow. 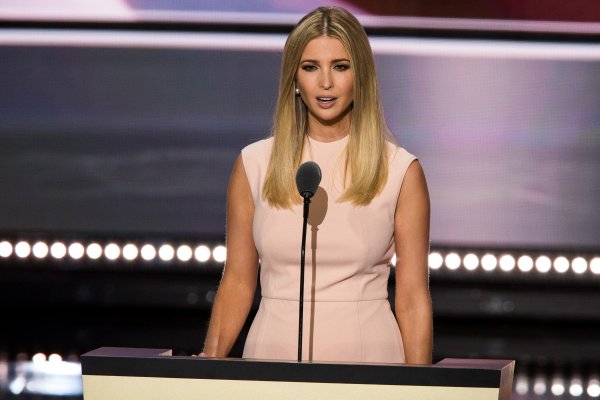 Ivanka Trump Says Donald Trump Is Not Sexist Because He Hired Her
Next Up: Editor's Pick